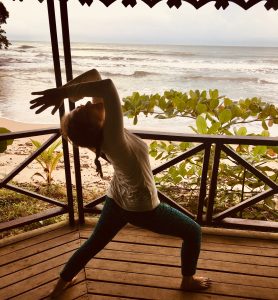 Costa Rica has become the go-to place for yoga retreats.  In 2017, a “Pura Vida Wellness” campaign was launched by the government, to springboard off the already solid yoga and meditation destination platforms here.  According to the nation’s tourism department, “In 2008 alone Costa Rica received just over 2 million tourists which generated just over USD $2.14 billion in revenue.” Plenty of those tourists are lugging around yoga mats. Every day of the year, yogis come here from around the world to get centered and grounded.

One yoga resource suggests there are 324 yoga retreat centers in this small country. Yoga Alliance, the U.S.-based certification board, names 66 Yoga Alliance-accredited yoga schools in Costa Rica. Of those, 50 are considered destinations, or retreat centers. Plus, there are more than 700 Yoga Alliance continuing ed (YACEP) providers in the country. Not surprising, since there are a wide variety of yoga teacher training programs here. Plus, dedicated yoga centers are everywhere, especially on the Pacific. Well-known yogis from around the globe routinely offer workshops and retreats here.  So, it’s not unusual that yogis gather near the University of Costa Rica in San Jose to chant mantras at Kirtan Fest Costa Rica.

This year’s Kirtan Fest took place the same weekend that Roger Waters from Pink Floyd was performing at San Jose’s National Stadium that can seat upwards of 30,000 people. Rock fans flocked to this city to take advantage of the concert. Meanwhile, a considerably smaller, but equally devout, fan crowd was chanting and swaying to the music at Kirtan Fest. At the second annual Kirtan Fest Costa Rica, there were five sets of musicians representing a good cross section of kirtan (devotional) music this year.

Camilo Poltronieri, a one-man orchestra, opened up the evening. A French musician living in Uvita, Costa Rica, he layered authentic tribal and traditional instruments with digital beats and electronic sounds of nature. Next, Radha Kanti Didi, a Costa Rican who leads kirtan all over the world shared a traditional set with two drummers, and large cymbals, and mini-gong. Next, Alejandra Ulate played harmonium accompanied by a flute player and other musicians. Alejandra combined traditional Sanskrit mantras with Spanish lyrics for her sing-a-longs. Mantrika was next. That ensemble featured a man and a woman strumming ukeleles with a Latin folk flair.

Closing out the night were the co-organizers Gabriel Wiernik on guitar, and Analú Fariña on harmonium. They were accompanied by other vocalists and percussion musicians.

Analú has been involved with large-scale music festivals in the U.S. and Europe. Plus, she was a kirtan leader at Bali Spirit Festival for two years in a row. A Costa Rican citizen, she was living in Bali when she felt the time was right to share kirtan with her community back home. She partnered with Gabriel Wiernik, a talented yogi and musician who studied at Berkeley Music School. He has a penchant for meditative and instrumental music, as well as kirtan.  As a composer and producer, he had already worked with diverse yogis and kirtan musicians. Analú also recruited her brother, a sound and light technician, onboard, as well as other Costa Rican kirtan leaders.

Hailing from a family of musicians, Analú got the Kirtan bug early in her yogic life. She also got the travel bug, where she combined her passions and nurtured her kirtan practice. She got comfortable singing in public in Paris. Then, in India, where she goes every year, she fell in love with kirtan. “I go back and study and practice with teachers and kirtanis there (India). When I moved to Bali in 2016, I became friends with a great kirtani there who invited me often to play in Ubud. Suddenly, it just started to flow from all my heart. Since then, I have been doing mostly full moon kirtans, every month. I include kirtan practice in classes, retreats and offer a strong emphasis of Bhakti (devotional chanting) during the yoga teacher trainings I offer.”

Kirtan Practice Takes You Beyond Bodywork

“In the West, in general, yoga is seen as solely a physical practice, or an exercise to gain strength, become fit, or flexible. I know people are working towards meditation and mindfulness in Costa Rica, and there are many teachers introducing it to students. Everywhere I have been there is always a wide palate of yogis, those who are just living spiritual materialism, those who dive deep into the studies, those who talk about it not walk. Those pure and loving that share from a place of the heart.  That is the beauty of life: variety. Some students will resonate more with just asana (postures), a specific practice, or a certain teacher. We have individual paths. One way or another, we will be where we have to be, learn what we have to learn, and evolve from where we are at that specific moment.”

Whatever your preferred form of yoga, Costa Rica has it.