Woodstock for Yogis Offers “School” in the Desert 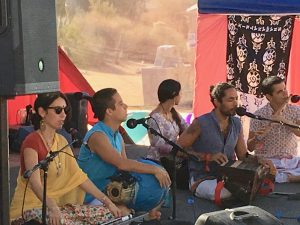 Summertime is travel time for the vast majority of Americans. Then, it’s back to school time. This September 12-17, there’s a “school” for adults to release inhibitions, and just sing. Kirtan School launches at the 10th anniversary of Bhakti Fest in Joshua Tree.  When “school” is not in session, attendees can bask in the mega devotional festival that’s been dubbed the Woodstock for yogis.

Thousands attend each Bhakti Fest.  However, among the general public, many don’t realize that Bhakti (devotion) is just as much a part of yoga as is downward dog or child’s pose. To help those go deeper in Bhakti, Kirtan School offers two-hour classes, twice a day, led by different kirtan (call and response spiritual singing) leaders.

Certified Master Somatic Coach, Integral Coach, and musician, Mike Cohen, is one of the Kirtan School teachers at the September Bhakti Fest. Through his Kirtan Leadership Institute he has guided many, some of whom have recorded their own CDs, or performed on the Bhakti stage.

He says the only pre-requisites to join him at Kirtan School are “a deep love for chant, a desire to go deeper, and a harmonium to play during the session.” No musical background is necessary.

For those that don’t travel with their harmonium — or even know what it is —  there will be plenty for sale at Bhakti Fest, or, you can share one with other attendees.

While Cohen has led many a workshop at Bhakti Fests, Kirtan School is a bit different.

“Past workshops at Bhakti Fest have addressed a wide variety of topics, but I’ve never seen workshops that focus on how to launch your home chant practice. My session,” promises Cohen, “will be a fun and safe space where chant lovers can be guided and supported in learning to play the harmonium and sing chants from their favorite Kirtan artists. Rather than exploring Bhakti Yoga, or learning ‘about’ Kirtan, our session will be unique in that it guides participants in how to play harmonium and chant.

In essence, Cohen’s Kirtan School offering at Bhakti Fest is a snapshot of his Kirtan Leadership Institute introductory-level series.  The focus is on “musicianship, with some attention on leadership and community building,” he explains. “We utilize a Somatic orientation to guide students to embody the skills and capacities required to chant at home, and share Kirtan with others with skill and confidence.”

Cohen sees the addition of Kirtan School at Bhakti Fest as a natural evolution. “Trainings for Kirtan Leaders are just now starting to make their way into festivals, which is truly wonderful. Chanting at home is the next step in the Kirtan revolution.”

Gina Salá has performed at Cirque de Soleil and at the U.N.  Her repertoire spans 23 languages, but Sanskrit holds a special place in her heart. Salá began chanting in Sanskrit as a child in India and then mastered traditional vocal expression in Nepal and India.

“One of the things I love about Indian classical singing is the way the stability of the voice allows for a stability of mind, and also for beautiful and evocative decoration of the notes which evokes strong emotions,” she says.

Salá, who’s been at Bhakti Fest since 2009, says the festival “feels like heaven on earth. When we sing and chant and practice together, we feel more connected to our essential self. We feel good. And of course, more and more people are waking up to the power of voice, chant, and yoga. Bhakti Fest is providing a great place for us all to gather and share.”

Kirtan School for Rhythm and Voice

Salá’s regular workshops at Bhakti Fest tend to be more Indian raga-based, which she says “calms and colors the mind.” Additionally, she often coaches attendees on the correct pronunciation of the Sanskrit mantras.

At Kirtan School, she hopes to empower participants to lead Kirtan.  At the same time, Salá’s class will give people tangible lessons on rhythm and voice to help them deepen their kirtan experiences.

“At the Kirtan School, I’ll draw on some of my Indian Classical music experience to share ways for chanters to incorporate some tonalities that are less common in western Kirtan. This inspires new creative expression. And, I’ll help participants experience and incorporate ways to decorate the notes of their Kirtans with some Indian influences. It’s empowering, accessible, and a lot of fun. As I see it, every voice is holy, and chanting Divine names and mantra is always a blessing.”

Kirtan School will help remove barriers or insecurities that some may have picked up back in elementary school. Who doesn’t remember a teacher telling them to “mouth the words.” Likewise, many can recall a friend with the perfect pitch or the cousin that was a musical prodigy.

In Kirtan, all have a voice, which is divine, as is.

“We are singing to the source of Love, and that is even what is singing THROUGH us. In my retreats and sound schools and such, one of my favorite things is hearing the natural voice of people who may not even know their own proficiency. With a little guidance, they may find their voices opening more fully. And either way, every voice is welcome. Come sing, come chant; everyone belongs in the circle of song! Every voice and heart are beloved.”

Sacred Space in the Desert

Every year, for the last nine years, Bhakti Fest has been held at The Joshua Tree Retreat Center. Located about 30 minutes northeast of the Palm Springs airport, it’s considered by many to be a sacred space. It is said that long ago, Native Americans conducted ceremonies in this area of the high desert.

Salá notes that many cultures find solace, serenity, and sacred vibes in the deserts.

“There are stories from so many religious traditions of people going to the desert to pray.” She attributes this, along with the no-drugs, no-alcohol, no-meat environment at the festival to draw people from across — and beyond — the States to Bhakti Fest.

“In a way, making a journey to join with others in sacred practices feels natural, especially when it feels so good. And the community of musicians, presenters, and participants keeps getting stronger, which makes it feel like a family reunion with a growing family… even for first-time attendees.”

Other Kirtan School leaders include Girish, Daniel Paul, Gaura Vani, and David Newman, all of whom will be performing at Bhakti Fest as well. Both Cohen and Salá will have several Bhakti Fest workshops and performances beyond Kirtan School.

Some of the best-known sacred musicians, yogis, and metaphysical leaders are on the Bhakti Fest lineup. This year, Deepak Chopra will give a keynote, and lead a global meditation.

“I was thrilled to be invited to the early Joshua Tree Bhakti Fests,” said Cohen. “While there, I got to meet and chant with many peers and idols from the Kirtan world whom I had previously known from their albums. While Bhakti Fest has always been a potent offer, what participants at this year’s festival will experience in 2018 is quite extraordinary.”