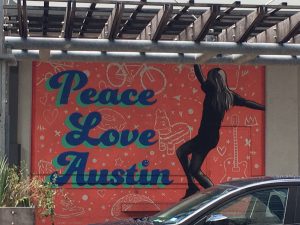 In the movie “Bernie,” real-life Texan, Matthew McConaughey, says Texas is a land so large, that from one place to the next, there’s little in common. His character jokes about Austin, and the folks that live there, that are lightyears away from Bernie and his fellow East Texans.  My take is, yogis, vegetarians, and vegans fit right in in Austin. It’s one of my favorite places to eat, practice yoga, and hang.

Who would have thunk that deep in the heart of Texas (Austin) would be the headquarters for Whole Foods — and more tattoos per square inch, and dreads per head.  We may be west of the Mississippi, but Texas is leagues away from California which seems to be as far out (west) as you can get. Texas is still the south, where butter and beef are mainstays.  Austin, however, is almost a Silicon Valley South, and a musician’s mecca.

I’ve been a Whole Foods fan, as long as I can remember. Some complain it eats up their Whole Paycheck. I believe you get what you pay for. Dollar meals are more costly in the long run. Fast food made with unintelligible ingredients, may lead to the need to buy Pepto-Bismol, multi-vitamins, a treadmill, statins, and god-forbid a heart bypass.

Investigative journalist, Dan Hurley, says “…the American Stroke Association, found that the risk of stroke increases with the number of fast-food restaurants in the neighborhood.” And, “A careful analysis…concluded that a total ban in all TV commercials for fast-food restaurants would cut the prevalence of overweight among children between the ages of three and 11 by 18 percent, and among adolescents by 14 percent.” He also reports in his book, “Diabetes Rising,” that the highest cases of diabetes are found where fast-food options abound, and healthier grocery stores are scarce.

Dr. Zachary Bloomgarden, editor of the “Journal of Diabetes” concurs. “Every mammalian species studied can with relative ease be caused to develop the equivalent of what is now called type 2 diabetes, simply by supplying food of the sort we make available in ‘convenience’ stores around every thoroughfare in the world.” Yet, we don’t think of the inconveniences of testing our blood every few hours or injecting ourselves with insulin several times a day.

Although I represented fast-food companies for decades, prior to my entry into the professional yoga world, the only product I ever consumed there was orange juice. Now, having to watch my own blood sugar, I don’t drink fruit juice. Since I’ve cut my professional ties to any company that I can’t condone, I don’t believe I’ve stepped into a fast-food joint, unless I was searching for a bathroom.

If I need a quick fix, I head for Whole Foods. Despite my attention deficit, or because of it, I hang out at Whole Foods, too.  Free wi-fi. Free samples of oranges, guacamole, coconut water, and toiletries. Great coffees (I drink decaf with almond or coconut milk), green drinks, and bulk bins to keep my mind, my fingers, my feet, and mouth moving.

Pretty much anywhere I travel, I gravitate to Whole Foods. One of the smallest in the nation is in Winter Park, Florida. Small but mighty. That location serves some of the best vegan Indian sag I’ve ever had.

But oh, everything’s bigger and better in Texas. In Austin, the seat of WF corporate offices, the shopping and dining, and hanging experiences are unsurpassed. Speaking of which — my first date with my beau was at the Austin flagship Whole Foods.  Our second date enjoyed a different setting. It was at the Whole Foods off Research Boulevard.  They even had live music performing in the cafe, and I could bring my dogs and sit outside on their patio.

My daughter and her significant other took me to the Lamar street Whole Foods for an ice skating date. We glided around in circles around the rooftop of the grocery store, then took a break to give in to our food and drink fancies at the numerous serving areas within the store.

Kids can get slices of pizza, with traditional mozzarella or vegan cheese. Some Whole Foods offer gluten-free pizza pies, too.  The flagship store has almost an infinity of soup and salad bars, filled with a range of Asian, Indian, Italian, Mexican, and American comfort foods.  Most of the Whole Foods I frequent have a great assortment of flavored tofu cubes, hummus, and falafel, which are great protein and texture for salads.

Speaking of add-ons, the Lamar store now provides an entire salad bar island filled with dressings and toppings, including all sorts of nuts, sunflower seeds, sesame sticks, brewer’s yeast, Bragg’s, and other high protein sources to flavor and crunch up your plate.

For fancier foods items, you can have the staff customize your stir-fry, or wrap, and there’s an island counter off the produce department with all sorts of raw vegan delicacies, including hummus and mock tuna salad.

I even enjoy buying gifts at Whole Foods. I prefer purchasing products that I feel do a body, and the environment, some good. You can find plenty of books, cards, floral bouquets, and other items that can contribute to making your body and mind a bit calmer, more positive, and stronger.

We are what we eat, and it’s important to treat your body with respect. Happy meals do not make your body happy.

According to the author of “Wheat Belly,” carbs and diabetes go together like fast food and burgers. “Where there’s wheat, there’s diabetes. It’s a relationship as cozy as McDonald’s and hamburgers,” says cardiologist William Davis.

So if you’re visiting Austin, be sure to check out the flagship Lamar Street location for a fast-food heaven, and opt for their high nutrient foods to feed your body and brain.