Weekend Getaway — Get Back to Nature in Central Florida 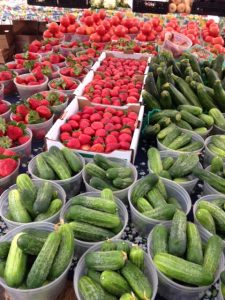 In his book about “Hyperreality,” Umberto Eco talks about Disneyworld. He thinks that the recreated villages may seem more real than the real thing and that people become a bit automated standing in all the lines waiting with thousands of other people while your car is nowhere within sight.

The reality of Central Florida is that Disneyworld has completely changed the landscape of the region. The population has grown immensely to feed the tourism industry, along with other businesses that feed the Disney boom like construction, retail, health care, and conventions.

While the theme parks are the biggest draws to this area, for those wanting to steer clear of the surreal world of uber attractions, visit Central Florida’s many Farmers’ Markets to connect with Florida’s real roots. They don’t call it Orange County for nothing.

Following are a few choices from Orange and Seminole Counties. All are less than an hour from the Disney domain, but seem leap years away, perfect for a conventioneer wanting to escape the mammoth steel interiors for a breath of fresh air and fresh food.

The Winter Park Farmers’ Market has been operating since 1979. It’s in a cute part of Winter Park, about five minutes away from Rollins College, and just ten or 15 minutes north of downtown Orlando. There is a beautiful area for flowers and plants. Inside, vendors nuts, chocolates, coffees, bread, and a long line of people wait for bagels and cream cheese which look very different from the Lender’s bags. There is a covered gazebo-like extension to the building for people to sit and eat their homemade treats while overlooking the garden sales. The central market area fills the rest of the outdoor area overspilling onto a closed-off street.

Mick sells several varieties of vegan gluten-free salsas and hummus, including one dip that is heavy on the spinach and basil and light on the chickpeas, in a perfect way. “This is one of the best markets from a vendor’s standpoint,” he says. “We’ve been selling here for about five years and typically sell 80 tubs of salsa.”

Jenny lives in Daytona Beach. She drives 50 miles at least once a month on a Saturday morning. She especially likes the hydroponic tomatoes, Mick’s salsas and “the pasta people.” There’s nothing comparable to this in Daytona for the quality and variety of items, she says.

Vendors have orange and vanilla-scented cooking oils. Hawaiian plants. Veggie chips and dried fruit. But this is Florida, so citrus is still king. Five huge grapefruit sell for $3.75. Buying grapefruit, tangerines, or oranges by the bags is even more affordable.

For those venturing a bit further north of Orlando, Sanford and Lake Mary each have Saturday public markets. Both are rather quiet suburban-type settings with fresh produce, ad local artisans selling their wares. The Sanford Farmers’ Market is set in a small cross-section of a historic district at East First Street and Magnolia amid many antique stores and resale shops. The Lake Mary vendors set up their tables and tents next to City Hall on North Country Club Road.

All start around 9 a.m. with many vendors ready to sell as early as 8 a.m.

Sundays
Downtown Orlando is actually far from what many may expect. It’s peaceful and calm on the weekends. There’s a sprawling Farmers’ Market at Lake Eola Park from 10 a.m. to 4 p.m. Beyond buying your fruit and veggies here, you can enjoy live music, practice yoga, or participate in other fitness classes on the greens with the lake and a fountain as your backdrop.

This public market opened in 1987 and it’s one of the largest in the area with an eclectic variety of artisans and food vendors.

Glenn is known for his raw flax crackers. His flax seeds are not the same as those that may be in a grocery store. “Most seeds are three to five years old,” he explains. “Ours are a few months old.”

Glenn experienced a major life change. Leukemia. “We couldn’t get rid of it. My wife, Jill, sent me for a week to Rincon (Puerto Rico) for holistic treatment eating live food. We ended up staying three months. That was 17 years ago.”

Now he’s dedicated to getting live food to more people. He has farms and greenhouses in Puerto Rico, Colombia, and Panama and sells at 30 Farmers’ Markets. Glenn was not a healthy eater prior to his cancer scare.

“These (crackers) exist because I told my wife I’d never eat flax. It took her six weeks to formulate them and make them crispy and tasty.”

Guido Osorio is from Leesburg and he sells chifles (fried plantain chips) to a lot of tourists at seven markets in Central Florida. He has a few of the raw green plantains on display to educate the customers. “I’ve been at this market 34 years. Some don’t know what the plantain is. We did 500 pounds this week.” That’s a lot for the feather-light chips.

For those wanting to explore beyond the city limits, Maitland is about halfway between Orlando and the Sanford/Lake Mary region, off US Highway 17/92. The city of Maitland runs a Sunday Farmers Market set around a lovely small lake that’s perfect to stroll. The city gives away its own branded shopping bags, and musicians perform at the entrance to the lake walkway.

Several food trucks sell items ranging from Falafel to Empanadas. There are specialty chocolates, bread, coffee, Jamaican foods, Thai dishes, and spring rolls. One tabletop sells meatballs in a jar under the name of “On Top of Spaghetti.”

Kale is the craze, but many don’t want to eat it. Daniel Thorne’s story is similar to the flax seed cracker king. In April of 2013, Helen Thorne, a harried exec was on medical leave. She introduced her husband to kale. They tired of the flavors sold at the grocery store, so played with dehydrating the superfood.

Daniel set out to become “the Baskin Robbins of Kale.” In seven months, he had 31 flavors. He’s still creating more flavors of kale chips.

Speaking of things we know little about, Randy and Jodi Messer are loofah farmers in Central Florida. Yes, that scrubber that you may have hanging in your shower stall is actually a vegetable. Not unlike the way the Thornes dehydrate their kale, loofahs are what remain when the meat of the vegetable withers away. It’s almost like the skeleton of the cucumber-like plant.

Under the tent at the Maitland lake, is printed matter about loofahs, and a few of the actual live plants. From them, they handcraft veggie scrubbers, kitchen scrubbers, foot exfoliators, and back scrubbers, all at prices that will entice you to buy multiple loofahs.

The Farmers’ Markets are an interesting detour from Disney or Convention mania, even if you’re not shopping for kale or plantain chips. They’re colorful, in tranquil settings, and give you a chance to meet the people that work the lands, or with their hands.

For more information, check out www.centralfloridafarmersmarket.com.