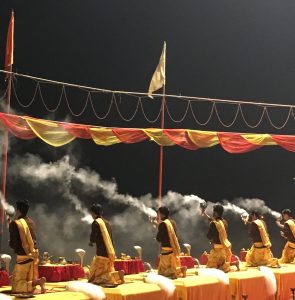 Varanasi is an incredibly sacred place for Hindus.  Originally called Kashi (city of light), the British called it Benares, and both of those names are still used for what is the oldest city in India.

I took a sleeper train to Varanasi.  Once inside the train car, I  relaxed for the next 14 hours or so. The windows shut out the sounds of the hordes of people standing, sitting, and sleeping on the platforms. As is the case with almost all my train travels in India, I enjoyed chatting with my berth mates.

“In other countries a long wait at a station is a dull thing and tedious, but one has no right to have that feeling in India. You have the monster crowd of bejeweled natives, the stir, the bustle, the confusion, the shifting splendors of the costumes–dear me, the delight of it, the charm of it are beyond speech.*”

They say Varanasi is an extremely chaotic town.

“The city is as busy as an ant-hill, and the hurly-burly of human life swarming along the web of narrow streets reminds one of the ants.”*

Many admit they don’t enjoy being here. Some encourage travelers to not visit until they’ve already gotten their feet plenty wet in India. And then, there are those that fall in love with Varanasi. Those that expect to stay a few days, and extend their time here a few months.

“Benares was not a disappointment. It justified its reputation as a curiosity.*”

Even though I’m not a fan of huge cities, I thoroughly enjoyed Varanasi. I tuned out the one million inhabitants and tuned in to spirituality.

“It is the headquarters of the Brahmin faith, and one-eighth of the population are priests of that church.”*

Each morning, I woke several hours before dawn and headed to Assi Ghat (the southernmost of the dozens of ghats). This is the site for communal morning prayer, yoga, and traditional Indian music performances. Two days in a row, for aarti (morning prayer) I sat far from the main stage. However, my spot was better than a front-row seat.

I was seated alongside the schoolgirls who were leading the prayer chants. Additionally, I watched them set up the flower and chalk arrangements, and was shoulder to shoulder with all when the Brahmin came to light the fire and lead prayers. I was so thankful for these experiences and felt at one with the young girls to whom the task of public prayer must have been an incredible honor.

Again, I was totally feeling the spirituality. In the smoke. In the flowers. In the robes. In the chanting. Then, it was time for yoga. As a yoga therapist, practicing on the Ganges was definitely special. However, what made my experience unforgettable was one woman out of the several hundred people.

The first day, I staked out my spot near the front. Once we began, to my embarrassment, I realized I was surrounded by men. And a few stray female foreigners.  The second day, I headed to a tent-like covering that was obviously for the women.

“The Ganges itself and every individual drop of water in it are temples.*”

I guess I must have been one of the few foreigners that morning, in this area. The lady next to me kept staring at me. I didn’t mind…too much. I followed the Hindi instructions of the teacher fairly well. Fortunately, I know most of the Sanskrit words for different types of breathwork and poses. So I never had to look at my staring lady beside me for cues. I stayed in my little yoga world, and let her stares pass right through me.

At the end of class, it was time for laughter yoga. This was my time to make friends with the lady who seemed very uncomfortable next to me. I kept looking at her, pointing, and exploding with belly laughs and smiles.  I got her to smile, too, which made my day.

Manikarnika Ghat is about a 40-minute leisurely stroll along the riverfront from Assi Ghat. This is where cremations take place. Hence, it’s a hot spot, in more ways than one.

“All India flocks thither on pilgrimage, and pours its savings into the pockets of the priests in a generous stream, which never fails. Religion, then, is the business of Benares, just as gold-production is the business of Johannesburg.*”

I’m warned by locals not to get too close as the odor can be overwhelming, and the smoke is not good for the lungs. A young Californian I chat with has done his homework. He seems to know all the quirky stories about Varanasi. He tells me that the main funeral pyre has been burning for 3,500 years. And, only men are allowed to cremate their relatives.

For the wildest of stories, he points out the Aghori yogis. He says they tend to hang around where the burning is.  Reason being, they’re want to find human ash to cover their bodies.  The Aghoris are essentially naked. They are “clothed” in ash. Even wilder, he says they eat human flesh as a way to achieve transcendence. Flesh of the deceased, of course. One of the Aghori babas has an ashram across the river. The Californian spotted him earlier in the day, not far from the burning ghat. He tells me the baba wears a collar of skulls for ceremonies.

The Californian tells me he spent about six hours at the burning ghat. However, the cremations were not anything that really attracted me. I found so much spirituality tucked away in the narrow maze of streets. Hidden temples. Some in ruins. All, glowing, still, with spirituality.

“It is on high ground, and overhangs a grand curve of the Ganges. It is a vast mass of building, compactly crusting a hill, and is cloven in all directions by an intricate confusion of cracks which stand for streets. Tall, slim minarets and beflagged temple-spires rise out of it and give it picturesqueness, viewed from the river.*”

Evening prayers take place far from the morning arati. Essentially, I spent the entire day at the string of ghats that line the Ganges. From pre-day to post-dusk. As memorable as the daytime ceremonies were, so was evening arati. I sat alongside hundreds of people. Maybe a thousand. Among the crowd there were just a few dots of people who were obviously not India. (Most tourists take the evening arati cruise). The devotion surrounding me was not unlike the feeling I had in Istanbul mosques. The spirituality was contagious.

However, in Varanasi, the prayers are tightly connected to nature. Sunrise. Sunset. Fire. Flowers. Rivers. And, feeling connected with the other people present was critical for my experience.

The Type A-ness in me evaporated in Varanasi. I was content to sit, stroll, and just soak up the sights, sounds and spirituality.

“Benares is the sacredest of sacred cities. The moment you step across the sharply-defined line which separates it from the rest of the globe, you stand upon ineffably and unspeakably holy ground.*”

*All quotes are excerpts from Mark Twain’s “Following the Equator,”  Chapter 50.