Sleep in an Island Lighthouse 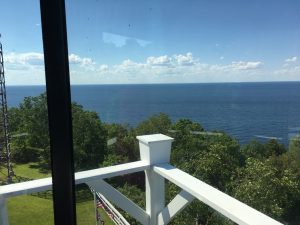 Secret in the Lighthouse

It could be the name of a Nancy Drew mystery book. The mystery: Unravel the tale of the Pottawatomie Lighthouse’s missing fourth-order fresnel lens. Props: authentic journal entries from past generations of Rock Island “Keepers of the Light.” Your Clues: You’ve gone back in time to a remote island in La Porte des Morts.

Adventurous souls can take advantage of what the Door County, Wisconsin Visitor Bureau calls a “coveted” opportunity on a “primitive 912-acre pedestrian-only island home…” on Lake Michigan. Travelers in search of unique accommodations, off-the-beaten-path,  can play the role of the “keepers of the light” at Wisconsin’s oldest lighthouse completed in 1836. For one week, nature and history lovers can sleep, dine and read in the same quarters as prior lighthouse keepers.

Lighthouse Keepers for a Week

While there’s no paycheck for this modern-day keeper of the light (now called docent, since the light requires no upkeep), the benefits are notable.

1) The most obvious is the opportunity to act as the old-fashioned lighthouse keeper, ponder the mysteries, and relive the lifestyles of those who were here in the days before TVs, planes, computers, and cars. (‘Cuz you won’t be seeing those here.)

The very first lighthouse keepers were David Corbin and Jack Arnold. Not entirely alone, they shared the property with their dog and horse. Corbin, who manned the lighthouse from 1837 until his early death in 1852, is buried a short walk from the lighthouse in a tiny graveyard with ten others.

2) Secondly, relish the fact that the oldest lighthouse in Wisconsin is yours (albeit only for a week). The lighthouse was built, after the completion of the Erie Canal, to protect merchants and ship owners headed to and from Green Bay, Wisconsin.

3) Next, consider yourself the mayor pro tem — and schoolmaster– of an uninhabited island state park that boasts ten miles of hiking trails and 5,000 feet of beach. Throw your weight around in the off-limits-to-visitors basement, once used as the island schoolhouse. (Nobody’s gonna talk back to you, teacher.)

4) As if all the above aren’t reason enough for you to seek a week here, there’s one more bait. Free digs from a page in history. Not just a sleeping bag or cot. Rather, a traditional full-sized bed in one of three bedrooms. So, if you can’t decide which of your besties would make the best co-Keeper of the Light, share the experience among six friends or family members.

Each of the bedrooms includes true-to-era bedpans. However, lighthouse docents can do their duties in a comfortable outhouse knowing that they’re sitting inside a historic treasure. Indeed, this supersized non-portable potty is the oldest stone building in Door County.

The lighthouse is decked out in furnishings reminiscent of the 1800s. Likewise, true to history, there’s no running water or electricity. However, there are solar panels to power up a cell phone, and the outhouse is equipped with toilet paper and an antibacterial hand wash. (Upping the star ratings a bit.)

5) Finally, except for when you are guiding visitors through your temporary home/museum, the tip of this island is basically yours alone. Plenty of peace and quiet.  For most city folks, this is true isolation. Unless you have your own private boat, you have to jump from one island to another, from the Wisconsin mainland, to get here. The pier from which the Jackson Harbor ferry shuttles passengers to and from Washington Island is a 1.25-mile hike away from the Rock Island lighthouse. Primitive campsites with pit toilets, and no public showers, are about 1.5 miles from the lighthouse. Since there are no vehicles or even bicycles allowed, most of the sounds you’ll hear are from the birds. Likewise, most of the lights you’ll see are from the stars.

The lighthouse watchers have plenty of books to read, many of which expound upon the history of Rock Island. And, the view from the top of the lighthouse is a perfect place for a cozy chat or a place to meditate. It also makes for an amazing hideaway for kids.

While this kind of a getaway may sound too good to be true for those for whom a traditional hotel is not their ideal, it’s more accessible than you may expect. The role of the lighthouse docent is open to anyone affiliated with Friends of Rock Island. That translates to a $15 registration fee or $30 for a family membership.

Anita and Mark Theiler had camped on the island a number of times before it occurred to them that the job of lighthouse keepers would be a real treat. They applied and won a summer slot.

“We both love to camp at Rock Island,” explained Mark. “And, she loves history. This particular lighthouse is unique in that it is so well-restored and so historic. Plus the fact that we take up residency for the week!”

Seasoned campers,  living off the grid didn’t deter them. While there’s an old-fashioned stove in the lighthouse, Anita raved about the grilled chicken they made for dinner on the fire Mark built one night. Then, thanks to a portable solar panel they brought, they bathed in warm water.

“The organization that runs the docent program is an excellent group,” Mark said. Which translated to a great experience for them.

Room With A View

Mark ticked off some of the highlights of their week in the lighthouse.

“Meeting people from all over the world. I  even learned two Chinese words.”

“The gasps and wows from people when they ascend to the 150-foot level in the lantern room.”

“The absolute peace at 6 a.m., waking and looking out over Lake Michigan.”

“No TV. Lots of books and the lack of distractions to complete them.”

As Mark mentioned, the light at the top of the lighthouse is a focal point for visitors. Inside a nine-sided wooden lantern room is a shiny Art Deco-looking meter-high fresnel lens. As part of what could be the Secret in the Lighthouse, the original fourth-order Fresnel lens went AWOL. Apparently stolen. Ships, however, now pay attention to a modern solar-powered light that flashes every four seconds from a nearby structure.

Know Before You Go