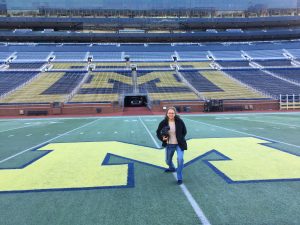 Big Thrills at The Big House

Today’s Michigan Stadium is the second-largest in the world and ranks #1 in the U.S.  A Wolverines football game is one of the biggest magnets in Ann Arbor. Every UM football home game is sold out. That’s more than 100,000 people headed to The Big House for just a few hours.  So let’s be real. It’s not that easy to watch a game from The Big House.

Consider this. There are only six or seven home games a year. UM students get priority to purchase season passes at student rates — just $25 a game. Regular tickets go for $65 to $120 at the goal line with a 99 percent renewal rate on the tickets, so good luck. Suites with 16 seats, each, are leased for three to seven years at $60,000-90,000. And, there’s a waitlist for those that want to write out that tax-deductible check.

If you can’t get a seat inside The Big House, and your best friend doesn’t own a skybox, join up to 100,000 tailgaters to cheer on the Wolverines. In addition to UM counting with the biggest stadium in the States, arguably Ann Arbor also has the biggest tailgate crowds.

For those whose trips don’t coincide with a home game, you can still feel the frenzy.  For less than the student price of a seat, you can have a guided tour of The Big House. Tour options range from one to two hours in length. For the biggest thrills, check out the restricted areas such as the team locker room, press box, and premium seating.

Or, stage your own unforgettable coming together of two teams. Last year, there were 38 weddings at The Big House, with up to 400 guests. What’s more, bridal parties can affix their veils or don their tuxes in the team locker rooms.

Plan a Visit to The Big House

Book a visit, Monday through Friday, at least two weeks in advance. No tours are available on holidays or on the Friday, Saturday, or Sunday of a home football weekend. Non-profits and schools get steep discounts on tours.

Oddly enough, UMMA was built as a war memorial. One hall was completed in 1910, and in 2009 a 53,000-square-foot wing expansion opened to more than double the exhibition space. Today, UMMA is not just a place for people to check out pictures on a wall. With no admission charge, students frequently bring their laptops and study in the café or the halls.

On evenings and weekends, the community, and visitors alike, attend free events.  And, like The Big House, UMMA makes for a great backdrop for a wedding, bar mitzvah, or other private parties.

The foyer, with a 40-foot high skylight, is perfect for your special event. Imagine music from a grand piano or harp as people mill around the marble floors surrounded by two stories of pillars.  Gracing the front of the room are sculptures on opposite sides. One is Nydia. Purchased in 1856, Nydia was the first UMMA acquisition. She appears to be made in Rome, or Pompeii. Yet, Nydia was cast out of Carrara marble by an Ann Arbor native in 1861.

Nydia may stand proudly on display, taller than most of us, 365 days a year. But, she is dwarfed by the sheer number of works of art in the UMMA storage facilities. After 150 years of donations and acquisitions, UMMA’s catalog includes 21,000 pieces in its permanent collection.

To support and manage the large assortment of ever-changing exhibits, the museum counts on 94 docents, 36 full-time employees, and an equal number of part-time or temporary staff. There are 7,000 members, and many art donations are from UM alums. For example, the Korean art collection was one alum donation.

The Korean art selection is part of what is considered the largest collection of Asian art in Michigan. Within the South Asian wing, are reflections of Hindu and Buddhist worlds. A Tibetan altar graces the room and has been the stage for traditional Buddhist ceremonies.

Representing the Hindu traditions, the adjoining room showcases about a dozen gods and goddesses.  For example, an 11th century Indonesian volcanic stone carving of Ganesh, a 10th-century sandstone statue of Vishnu, and a 15th-century wooden Dvarpala (doorman) from the southwestern state of Kerala.

UMMA is one of the few museums of its size to have a dedicated African art curator. Most impressive is a large sculpture standing across from a somewhat hidden stairwell. The structure is entirely built out of weapons to signify de-armament and the past struggles in African nations.

On a brighter note, there’s a sizable Tiffany glass collection. All the pieces once embellished the Havemeyer family mansion in Manhattan. The former Fifth Avenue home was Tiffany’s foremost commission.

Plan a Visit to UMMA

Always changing, in 2017 there were 15 exhibits at UMMA. Among those still viewable is Power Contained: The Art of Authority in Central and West Africa, through the end of 2017. One week later, Gloss: Modeling Beauty closes. A selection of Matisse drawings and sketches circa 1900-1950 is on display through February 18. Finally, Jim Cogswell’s Cosmogonic Tattoos is featured through June 3.

For more information on planning a trip to Ann Arbor and surrounding areas, check the calendar or request a visitors guide at www.visitannarbor.org

Special call out to the Ann Arbor Area Convention and Visitors Bureau for hosting me in Ann Arbor, and inviting me to The Big House and UMMA.