Travel to India, As if it’s Home 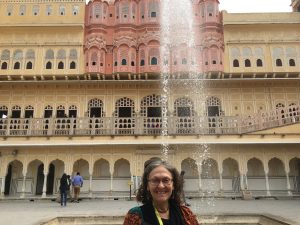 As a young child, one of my great aunts was a world traveler. She lit up talking about India. She loved not only the inherent beauty of the countryside and palaces but the charm and warmth of the people.

There is no doubt that there is something special about India. Something magical. Spiritual. For many, once is never enough. The magnetism of India keeps pulling them back. I spent a month in India five years ago (read about those experiences in the Traveler/Postcard archives).  I’ve wanted to return — for almost five years.

I typically avoid tours, chain hotels, and prefer traveling off the beaten path. I hate to be the obvious gringo, and try to blend in and soak up the culture. Plus, I believe that travel is in great part about meeting people from different cultures and learning from them.

That’s why I have found a few spiritual journeys that I consider “un-tours.” It’s more like tagging around with your friend as they go home. The following tour options are led by Indian-born and -raised yogis that live and work stateside. The trips that they offer take the traveler to the places and people that shaped their lives. They are not about just checking off tourist magnets, although there are still plenty of monuments and cultural activities to feed the cravings of the typical tourist. Their trips go a bit deeper.

Vacation of a Lifetime

Jogi Bhagat began coordinating very affordable tours to India when friends and students asked if they could join him on his trips back home. He’s now planning his ninth tour of India. His Vacation of a Lifetime takes place this holiday season, December 22 to January 5, 2017.

Bhagat’s trip includes pretty much everything except round trip airfare to Delhi. Before the departure, he offers an optional pre-journey get-together, so bonding can begin before they hit the runway. Plus, he can answer the so many questions that first-time India visitors may have, and they can be better prepared for their experience.

Unforgettable sites they visit are the Taj Mahal; the Delhi Akshar Dham spiritual complex which opened in 2005 having been built by 8,000 volunteers; the dazzling Amber Fort and Palace in Rajasthan; and Palace of Winds in the heart of Jaipur built in 1799 to resemble Lord Krishna’s crown.

True to his style, highlights include breakfast at the home of his brother on the way to Agra (Taj Mahal), lunch with his sister’s family in Delhi, morning prayer on the banks of the Ganges where many of his family’s cultural rituals took place, a visit with his priest and the temple where his family tree is preserved. Plus, you can ride an elephant, get your hands henna painted, learn how to wrap a turban, sit with a snake charmer and get on stage with folk dancers.

While his trips are cultural immersions, they are also chances to deepen one’s knowledge in yoga and spirituality.

“India is a mystical land that has a living ancient culture in its many holy places and Ashrams,” he says.

Apart from the tourist sites, he offers yoga, meditation, and talks by Yoga Masters on living a fulfilling life. Accommodations are split between hotels and ashrams.

“While traveling to most popular tourist destinations of North India we will not only delve into India’s history of massive forts, the opulence and splendor of Rajasthan’s palaces but also have the opportunity to visit some of the most serene and spiritually enriched places in the majestic Himalayas,” Bhagat adds.

Bhagat’s evolution as a tour guide is similar to Indu Arora’s story.   She’s also an Indian-born and raised yoga therapist, currently living in the U.S.

“I never planned on taking a group to India,” explains Arora. “All I was doing was sharing my experiences and learnings, and I started getting people to ask (to go with). It was never a planned activity.  The intention is different. People wanted to see India through my eyes.”

“India is a discovery. You have to really peel it layer by layer. One aspect is such a sensory overwhelm. The senses are bombarded, whether in the former of taste, colors, sounds, beautiful places, different fragrances — people get drawn in.”

Before she moved stateside in 2005, she had never ventured outside the Indian sub-continent. Arora’s tours are transparent windows to her culture, and to help people find their own identity and spirituality.

India with the Masters

“This journey is based on how I have viewed India as I was growing up. My intention is not to go to places that are famous or talked about. It is all about how I have experienced India. What masters have influenced my life.”

Arora has a long history of studying with masters.  As a young child, she learned by watching her father practice yoga and meditation. Her mother and grandmother incorporated Ayurvedic life science rules in their daily routine.

At 16,  she began her serious study of yoga. She moved far from home to study with her master. She soaked up the learnings, shadowing or conversing with her from dawn until past midnight.  Her guru never accompanies tourists, but she will join Arora and her guests for 15 days in 2017 on Insight India.

Scheduled for November 2017, Insight India is an amalgamation of the five elements, moving from earth, water, fire, air, and space in Southern India.

Among the sites visited will be one of the seven wonders of India. Rameshwaram is situated on an island, not far from Sri Lanka, but in the Tamil Nadu region of India. Considered one of the holiest spots in India, it is a frequent site for pilgrims. According to legend, this is where the god Rama built a bridge to rescue his kidnapped wife Sita. Of equally rich mythological history is Jambukeswarar Temple in Thiruvanaikaval. Constructed about 2,500 years ago, tradition says Lord Shiva built the fifth corridor in the form of a spider. Set between two rivers, locals say that one is blessed in both this lifetime and the next, by worshipping here.

To gain an understanding of the ancient healing art of Ayurveda, travelers will visit an Ayurvedic healing village. Arora, herself, is well versed in Ayurveda, the life science side of yoga. Also on the agenda are Madurai, which some consider the soul of Tamil Nadu; and Kanyakumari, where three major bodies of water meet at the southernmost tip of India.

Insight India is “an experience which is a perfect blend of rest, rejuvenation, exploration, yogic insights, rituals, and pilgrimage,” says Arora.

Arora is leading Inspired India March 24 – April 8 of 2017 with Yoga North Duluth. The journey includes a weeklong intensive study of Sacred Indian Philosophy with Arora, while staying at the Himalayan Institute’s Shri Vidya Shrine. Day trips will focus on nearby Hindu and Jain temples at Khajuraho, a UNESCO World Heritage Site in Madhya Pradesh, southeast of New Delhi.

Optional yoga sessions will be available.

“This will be a rich tour with many other spiritual seekers and world travelers who are hungry for the past and present experience that India has to offer.”

The second half of Inspired India will be dedicated to Neem Karoli Baba’s ashram in Kainchi, where both Steve Jobs and Ram Dass (Richard Alpert) were inspired. Ample time will also be dedicated to Agra’s Taj Mahal and the holy city of Rishikesh along the Ganges River.

All these trips are limited to small groups, so early reservations are suggested. Additionally, India requires visas which must be requisitioned several weeks prior to departure, for a fee.