Tranquility and History in Monterrey, Mexico 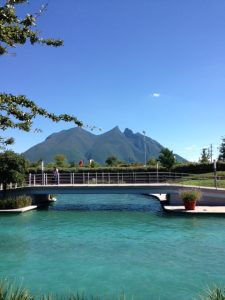 I first passed through Monterrey back in the late ‘70s, on a bus, headed from Nuevo Laredo to Mexico City. All I recall was it was urban, industrial and with grayish skies. I took that bus several more times over the next decade, and I never much had a desire to get off the bus. I equated Monterrey with manufacturing. It was far from the hundreds of quaint picturesque towns that I cherished in the mountains and coastal areas throughout Mexico.

When I moved to Texas, one of the draws was that I’d be a hop, skip and jump away from Mexico. While Monterrey wasn’t my idea of a Mexican vacation getaway, once I braved it to the big city, I returned every year. I found the heart and soul, hanging out in the Barrio Antiguo and historic city center, or soaking up the many natural wonders beyond the urban sprawl.

For those seeking adventure, or tranquility, there are quite a few of nature’s playgrounds in the outskirts of Monterrey. Chipinque Park, the caves (Las Grutas de Garcia), Cola de Caballo waterfalls and El Sabinal National Park in Cerralvo are all worth visiting.

If you don’t have the time, or transportation, for these day trips, you can find an oasis in Parque Fundidora. Easy to get here by car, metro, or even walking, the park has miles of walkways and bike paths and 430,000 square feet of green space. Just beyond the lovely illuminated water fountains and public art adorning the Santa Lucia walkway, there’s something for everyone here, and enough to keep you busy all day, and night.

Fundidora is an example of creative reuse designed by city planners and architects. In 1986, the steel plant that made the city what it was, closed. Plans for an industrial archaeological site spawned Parque Fundidora. The first stage was opened in 1971, and over the next ten years, the park developed over 142 acres.

Original heavy equipment, towers, and more than a hundred smaller remains from the plant are part of the landscape. Offsetting the heavy metal are two miles of hike and bike paths. You can rent a bike, boat, or ice skates, and take a break to work out on the exercise circuits. Appreciate the architecture, art, movies, concerts, special events, history, food, and fitness, at the park built at the old-time steel foundry.

One of the best ways to learn about the history of Monterrey is to visit horno3. Built on the site of one of the smelting ovens, this is a history museum, kids interactive space, restaurant with a view, 130-foot-tall steel playground for curious adults, and even a backdrop for weddings.

horno3 tells the story of how steel and iron changed the landscape, forever, of Monterrey. Before the Mexican revolution, Monterrey was a traditional agrarian community. When the railroads were built, the valley between several sets of mountain peaks became accessible to people from many other parts of the country. Monterrey was never a mining town. The closest mine was in Durango, almost 400 miles away.

On May 5, 1900, the Fundidora project began, with the backing of numerous investors from different countries. Eventually, with three furnaces, the foundry provided most of the steel for the entire country.

To meet the needs of the plant, workers from the fields, some as young as 13, were put to work here. Around 1920, with the power of the unions, worker conditions were improved. The steel worker’s time in the plant was reduced to eight hours a day. Fundidora was producing 32,000 tons of steel. By 1938 that figure quadrupled. Some of the workers’ personal stories are retold here, including one of a young man that walked, barefoot, an hour, to get to the factory. “What’s an hour?” he says. “By six in the morning, when they blow the whistle, I’m at the factory door (ready to work).”

Eventually, 14,000 would be employed here, and the management created a store and health care services for them. Residential communities were built to house the growing number of workers.

The railroad routes expanded to connect from Ciudad Juarez to Veracruz on the gulf, and from Nogales to Veracruz. The need for steel was increasing consistently, which only brought more people to work in Monterrey for the foundry, and beyond.

As the metals and minerals heated, waste floated to the top. That was siphoned off and collected, and used to make cement. That resulted in the establishment of CEMEX in 1906. Today, the Mexican cement giant manufactures and sells cement to more than 50 countries.

The Fundidora stimulated economic growth in many areas. Monclova was a small farming community. Once the hornos (furnaces) arrived, the city changed. Growth came as a result of the need to build more schools, homes, and businesses using the new building materials.

Eventually, with changing politics and a stiff devaluation, the industry required streamlining and a new direction. Loans couldn’t be repaid. Horno2 was sold to pay off debts.

1974 represented a boom for the Mexican oil industry. From 1976-1982 Pemex (the government-owned gas and oil company) used 3.5 million tons of tubing, rods, and other steel materials to build pipelines, giving the plant a boost. Those years, however, coincided with several devaluations. The government cut back, and the foundry was on the verge of bankruptcy. It struggled to stay alive, but by 1986, due to a wide variety of factors, what once was a mega-enterprise was forced to close.

Steel may have shaped Monterrey into a city of tall buildings and high-speed rail. Without the steel industry, the valley may have remained quiet and peaceful. Fortunately, Parque Fundidora is an oasis of tranquility and opportunities to get close to nature, within walking distance from the city center.