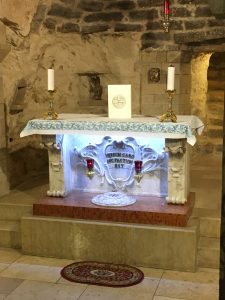 Those seeking to follow the historical trails of Jesus of Nazareth can spend endless days and nights in the Holy Land. Perhaps the ultimate immersion into the connection with Jesus’ path is the Gospel Trail. If you don’t have time for a 65-kilometer trail, theologian and historian, Gary Frazier, Ph.D. has a top-five list that can be done in as little as two days.

Frazier has traveled to Israel more than 150 times since 1971. The former Protestant pastor has taken tens of thousands of Christian congregants and more than 2,200 senior pastors on his trips. He says spending 10 days in Israel can be a better learning experience than a year in the seminary. “To go to Israel is an investment in your spiritual growth because it’s the single greatest opportunity for accelerated spiritual growth that you’ll ever have,” says Frazier.

Frazier, who has seen a large increase in American Christians going to Israel in the last few years says these pilgrimage sites are important because the average church-goer has little understanding of the importance of Israel. The seed of passion for Israel that began to germinate in his heart has flourished to include 12 non-fiction books, including “Miracle of Israel.” While Frazier encourages longer pilgrimage tours, his short list includes the following:

Established in 1893, The Garden Tomb is at the top of the list for Frazier. He explains that in 325 AD, Constantine who had Christianized the world, commissioned his mother, Queen Helena to build churches over the holy sites. Among those were Holy Sepulchre and the Church of the Nativity. While Holy Sepulchre is traditionally considered the location where Jesus was crucified, Frazier notes that “As time moved on, there were bible-believing Christians who questioned if Holy Sepulchre was the site of Jesus’ crucifixion.”

First, Evangelicals believe that Jesus was sacrificed NORTH of the altar where the temple was built, and outside the city walls. Holy Sepulchre is West. Furthermore, crucifixions were usually done for public view, at major crossroads. The Garden Tomb was on the main road to Damascus.

Next, according to the Bible, there was a skull near the crucifixion. Right behind today’s Damascus Gate bus depot is what’s called Skull Hill. The carving in the rock that resembles a skull, over time has eroded but is still visible.

The Bible says, “at the place where Jesus was crucified, there was a garden…” There are many vestiges of ancient gardens at The Garden Tomb, including a 2,000-year-old wine press, and a receptacle for 250,000 gallons of water

Finally, visitors can peer into a tomb within a cave here. Discovered in 1867, the burial grounds include a preparation room and chamber for the remains with Byzantine wall paintings. It is believed that Jesus’ secret disciple, Joseph of Arimathea, was also buried here.

One tour guide says this “is a place that speaks of God’s heart. The garden tells the story of salvation.  After six hours of agony, Jesus was buried. Then, ‘Darkness covered the land.’ Jesus went to the cross, but on the third day, rose. Angels said, ‘Don’t be afraid. He has risen.’”

Visitors to The Garden Tomb can sing hymnals at many a sitting area.  Admission is free. Donations accepted.

The Church of the Holy Sepulchre

Holy Sepulchre was among the most memorable sites for Lizette Jenness Olmos when she traveled to Israel to nurture her Catholic faith.

When she entered where it is commonly believed that Jesus was crucified, buried, and resurrected, it was very moving. “I cannot even explain how emotional that was for me to be standing in the exact place. It brought tears to my eyes and I stood there speechless for some time. To be in the exact locations where Jesus walked, and major milestones in the gospel narrative of the life of Jesus is an experience like no other.”

Via Dolorosa/Via Crucis (Way of the Cross)

The Via Dolorosa begins at Lion’s Gate and passes through many a winding road in the old city. The final station, #14, is the Cross at Holy Sepulchre.

It’s a must-walk, for many.

It was a top spot for Marivi Howell-Arza. As a student in Lebanon, she spent a week in Israel visiting sites and taking in lots of lectures. “Due to the rushed nature of my formal tour, I wasn’t able to fully take in the Church of the Holy Sepulchre or Via Crucis, but it was a profound experience nonetheless. I plan to return to do my own solo walk of the stations of the cross in order, and spend the night in the Sepulchre to get the truly spiritual experience I sought when I went the first time.”

Likewise, Karla Londono would like a second walk along the path Jesus walked with the cross. It was especially meaningful for her, as it was her grandmother’s unfulfilled dream to visit the holy sites. “It gave me goosebumps to see people praying, crying and kissing the stations.”

Bethlehem is inhabited by one of the oldest Christian communities in the world. Just six miles from Jerusalem, this is Jesus’ birthplace, as well as King David’s.

Most visit the Ottoman-style Church of the Nativity, one of the oldest churches in the world, and Manger Square. The Milk Grotto, where one drop of Mary’s milk, supposedly turned the entire grotto white, is another sacred site.  Mary was hiding here from King Herod’s soldiers to save baby Jesus from slaughter.

The rule of Bethlehem has been like a bouncing ball. It was sacked by the Romans in 529 AD, and rebuilt by the Byzantines. In 614, Persians destroyed every Christian church except Nativity. Not long after, the Islamic Caliphate conquered Bethlehem. In 1099, Crusaders entered into the picture with Latin Orthodox clergy. Then, the sultan of Egypt and Syria took power. Much of the city was destroyed by the Mamluks in 1250 and rebuilt by the Ottomans. Britain ruled during World War I. The Arab/Israeli and Six-Day wars passed ownership to Jordan and then Israel. Under Palestinian Authority control since 1995, Israelis are not allowed here, nor are Israeli rental cars.  Most tourists opt for a full or half-day trip from Jerusalem, although there are many hotels in Bethlehem for longer stays.

Galilee was a highlight for Lynda Queamante who traveled here with Canterbury Pilgrimages & Tours. She found the experience incredible. Especially the places around Galilee where Jesus taught and prayed.

“The main takeaway from being in Galilee is to see firsthand where Jesus walked on water, and first met the men who would become the apostles. It really brings the bible to life in a unique way.”

The Sea of Galilee is considered the “cradle of Christianity.” This is where King Saul lost his life against the Philistines and where the Crusaders built their kingdom. Moreover, three-quarters of New Testament tales took place near the Galilee.

Jesus spent much of his ministry here and performed some of his best-known miracles.  At the Church of Multiplication in Tagbha, Jesus fed 5,000 people from just two fish and five loaves of bread. Nearby, the Mount of Beatitudes is the traditionally recognized site when Jesus gave his sermon on the mount, saying, “Blessed are the poor in spirit…” Capernaum was the center of Jesus’ ministry.  Here, he recruited the apostles, some of which came from Bethsaida, and according to Mark 1:21 “he entered the synagogue and taught.”

Over half a million visitors step in the waters at Yardenit each year. For some, it’s an unforgettable baptismal ceremony. For others, it’s a place to refresh one’s feet in the pristine Jordan River where John baptized Jesus. The river is mentioned 200 times in the Hebrew Bible and New Testament. Passages from Mark say this is where God spoke to Jesus.  “When he came up out of the water, immediately he saw the heavens opened and the Spirit descending upon him like a dove. And a voice came from heaven. Thou art my beloved son.”

Nazareth is considered by some to be the seat of Christianity. Jesus of Nazareth was raised in this once predominantly Jewish town 15 miles west of the Sea of Galilee. Part of Israel since its formation, it is the largest Arab city in Israel, with a large Christian population.

At the Church of the Annunciation, and St. Joseph’s carpentry, Angel Gabriel came down and told Mary she’d be with God’s child, and that Joseph would take the fatherly responsibilities.

The modern church tower, which stands over ruins from the biblical era, is the tallest in the middle east. A few of the remains from the Crusaders and the Byzantine era are visible, including the grotto and title flooring. The current structure, with all its art panels from around the world, was built in the 1960s.

This November, pastors who have collaborated with Frazier are leading “Walk Where Jesus Walked,” which promised to be a life-changing trip.

Whether you go for two days or two weeks, solo or on a group pilgrimage, you can’t go wrong visiting these sacred spots.