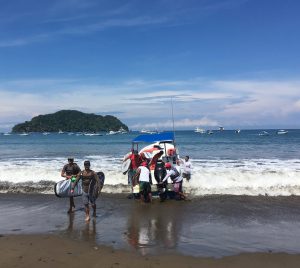 Tranquilo. That’s one of the reasons why so many Americans and Canadians flock to Costa Rica. The lifestyle is calm and slow. Except when you’re in the ocean, alone. Rather, just you and your board waiting for a ten-foot wave to rush in. Then the tranquilidad turns into a rush. Almost the reverse of a hurricane, when the storm follows the calm. The sense of tranquilo comes in the aftermath when you’re two feet are firmly planted in the warm sand and your hair and body are drying out.

Over the last 20 years, more and more North Americans have been heading down to Costa Rica, a very small country, with two coastlines: the Pacific and the Caribbean.

Given the vast shorelines, it’s popular with the surfing crowd. They come to ride the waves, and many chose to stay, or at least split their residency between the tranquilo land in Central America, and the often hectic crazy lifestyle farther north.

Jacó is a few hours southwest of San Jose, on the Pacific coast. A decade ago, it was a beautiful beach town that was attracting foreign investment.  Now, it looks like a slice of Miami Beach with a good number of high rises, many of which are solely inhabited by the snowbirds or those who’ve made the big dive and shed their northern skin and belongings.  Jacó is a “surfer’s paradise,” attractive to shortboard riders, many of whom are in their 20s and 30s.

Dotted along the roads that run up and down the coast around Jacó are many other surf spots that the more mature surfistas enjoy. Parrita. Esterillos.  Playa Hermosa. Herradura. Some of the surfers here are seasoned and serious. Others are just learning. There’s something for everyone, and at reasonable prices. You can buy a board, or rent one. Paddle, jet ski, knee paddle or brave the big waves standing tall on a longboard.

There are plenty of surf outlets and surf pros to steer you. In fact, it seems that there are more surf shops than coffee shops here. Signs for boards are just as visible as the Starbucks marquees in the States.

The surfers here are of all ages. There’s the young and trendy. Tattooed Californians and Floridians wear their pants hanging low, with the belt tied below the butt. Then there are the senior surfers with graying hair and whiskers. They may be packing in a pension, but their spirits are as carefree as the 20 somethings.

Surfers come in all colors and equal opportunity among the sexes.

Among the Tico surfers, some have African roots, and others are light-skinned and light-eyed. While there tend to be far more males than females on the waves, the women surfers (both Tico and foreigners) are serious contenders.

The regulars follow Surfline.com to be sure to catch the best waves in the morning and in the evening. Some of the ex-pats are in the water, early, every single morning. They also switch beaches, depending on the forecast and times of the tides. But pretty much any time of day you’ll see people with colorful boards in the ocean.

Costa Rica means “Rich Coast” and the coastline is a jewel for the surfers, providing them with a lifeline of both energy and tranquilidad. For non-surfers, there’s still a wealth of lovely beaches for sunning, swimming, and strolling. Todo Tranquilo.