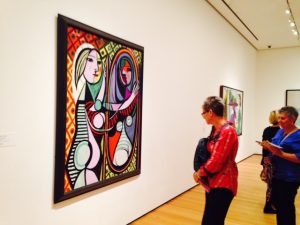 “Flesh is the reason oil paint was invented,” said Willem de Kooning. However, Rodin or Donatello may have argued that flesh was the reason for bronze, marble or even clay. Prime examples of the use of paint, bronze, marble, clay, and more are everywhere in New York City.

The Big Apple is perceived to have some of the best examples of art expressing life — or death. While it could take weeks for a traveler to visit all the gems the city has to offer, in a long weekend, art aficionados can check out three of the best-known art attractions: The Metropolitan Museum of Art (Met), The Guggenheim, and the Museum of Modern Art (MoMA). MoMA and the Met, are so large, and at $25 a pop entrance fee, visitors should plan to stay most of the day.

The Metropolitan Museum of Art, in particular, reminds me a bit of Madrid’s Prado or Paris’ Louvre. Visitors can get lost inside, or a bit bewildered with the endless possibilities of what to see here. It is the largest art museum in the country, and one of the ten largest in the world. In the last year, The Met opened its doors to 6.2 million visitors from the U.S. and 187 countries.

Just as it attracts people from all over the world, the curators have culled fine art from all parts of the globe and spanning several centuries. Founded in 1870, some of the world’s best known images reside here. With artwork by Vermeer, Degas, El Greco, Gauguin, van Gogh, Warhol and O’Keefe, as just a smattering of whose masterpieces are present, no matter what your style, you’re sure to find your favorites here.

Curators have created a few self-tours. Among the most popular are Treasures Saved During World War II; A Visit to Egypt; New and Familiar Masterpieces and a Celebrity Tour that takes you to the picks of Claire Danes, Marc Jacobs, Seth Meyers, Jeff Koons, Alicia Keyes and even A-Rod.

Fortunately, the Met, as well as MoMA, have beautiful outdoor eating areas to take a break from the art explorations and appreciations.

The Met has a rooftop cafe. Just above the fourth floor, the views of the city are outstanding. They have installed astroturf to give it a garden feel, and you can kick off your shoes and rub your toes in the “grass,” weather permitting. For those that need more to unwind, the cafe sells wine, beer and other alcoholic drinks, along with snacks.

MoMA opened in 1929 and moved several times. It wasn’t until 1984 that the Rockefeller Sculpture Garden, along with a major renovation designed by Cesar Pelli, doubled the gallery space and enhanced visitor facilities.

MoMA’s outdoor garden is on the ground level. It features a number of sculptures, including a Giacometti and Maillol and reflecting pools surrounded by chairs. The cafe is similar to a French bistro, with the iconic Metropolitain subway sign. They serve an abridged version of the menu from the third floor cafe which overlooks the garden. Among the dishes are lemon hummus with flatbread, curried chicken salad and gelato.

Whether your garden break is to prepare you to roam the exhibit halls, or to relax after you’ve explored the halls filled with favorites of Miró, Monet, Pollock and Hopper, the garden is a beautiful place to take it all in.

The Museum of Modern Art was the first in the United States to acquire a large-scale Monet panel. As far back as the early 1950s, MoMA curators were interested in Abstract Expressionist paintings and large canvases by the likes of Monet and Pollock. Pollock’s brightly colored blotches and strewn paint contrast deeply to Monet’s pastel-colored water lilies which the French artist composed to prove that “art can provide a balm for the modern soul.”

The MoMA is loaded with other French impressionists’ works. Henri Matisse’s “The Cut-Outs” is a major exhibit opening mid-October.

From the other side of the world, there are a few samples of the greatest Mexican politically active painters of the 20th Century including Kahlo, Siqueiros and Rivera.

While Diego Rivera paintings may be on exhibit at many museums, in 1931 the MoMA selected the Mexican muralist to be the second artist (after Matisse) to have a solo display here. At the time, he was proclaimed “the most talked-about artist on this side of the Atlantic.” A few of the originals still remain on display at MoMA.

According to a MoMA curator, Rivera was “enthralled with New York City from the moment he arrived here in November 1931, six weeks before the opening of his retrospective exhibition at The Museum of Modern Art. Fascinated by modern technology, he felt an immediate connection to the city.”

The Guggenheim is not as mammoth as the Met or MoMA, yet still charges a hefty $25 entrance fee. It sits right across the street from Central Park, so it’s a good idea to mix your visit here with a stroll through the park.

Perhaps one of the draws to the Guggenheim is the structure. Frank Lloyd Wright and Solomon Guggenheim began to plan the structure in the 1940s. It wasn’t until 1959, after both had passed away, that it was completed. Its premiere was an architectural display, and in the lower level of the Guggenheim, there are black and white photos that chronicle the history of the building, as well as other work by Frank Lloyd Wright.

This was the first of Wright’s buildings in New York City. His response to the Big Apple was opposite that of Rivera. “I can think of several more desirable places in the world to build his great museum, but we will have to try New York,” he said. One million visitors to the Guggenheim, yearly, apparently disagree with Wright. Wright sought to create affordable utopian living spaces, and he called those Usopia. A master at utilizing space, the Guggenheim is built almost like a snail, with the floors and walkways spiraling up and around. The empty center can be used as a seven-story stage for the featured exhibits. The building exterior, and interior, are simple and solid white walls which present a perfect canvas for the art installations.

Due to the constantly changing exhibits and special events, visitors should check the web sites (or apps) of each museum in advance (metmuseum.org, moma.org, guggenheim.org). Each also offers audio tours or docent-led walks.

While most museums are closed on Mondays, these three institutions are open. The Guggenheim is closed Thursdays, with evening hours on Saturdays. The Met remains open until 9 p.m. on Fridays and Saturdays. MoMA is open 10:30-5:30, with extended hours and free admission on Friday evenings.