10 Years of Woodstock for Yogis 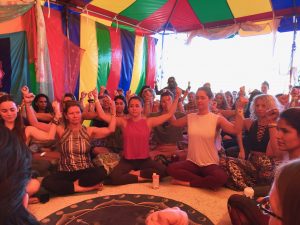 It was 1969. Somehow, a soft-spoken kid from Long Island, Sridhar Silberfein, was successful in bringing a renowned spiritual leader from India to Woodstock. There were more than 400,000 gathered. After his time on stage, Swami Satchidananda tasked Silberfein with creating a similar festival.

This September 12-17, Silberfein is hosting his tenth successful Woodstock for yogis at Joshua Tree Retreat Center in Southern California. Per the Swami’s vision, it’s full of devotion rather than sex, drugs, and rock ’n roll.

Bhakti Fest offers a plethora of meditation and inspirational workshops with experts from around the globe, including Deepak Chopra. Most, however, are attracted to the sun-up to sun-down yoga and almost non-stop dancing and chanting to live music.

“Everyone knows that our line-up of sacred music is one of a kind,” explains Silberfein. “Unlike other festivals which book pop bands, we have immersive music in multiple genres which everyone can sing to. The audience is as much a part of the show as the bands on stage.”

Mike Cohen has been a workshop leader and kirtan performer at Bhakti Fests for nine years. “I am truly amazed by the extraordinary way Bhakti Fest founder Sridhar Silberfein brought his vision into reality. In the wake of Woodstock, he held his vision of a ‘Spiritual Woodstock’ for decades!”

Cohen expects the September 2018 festival to be the best, ever.  “It’s been simply astonishing to see the way the number of stages/venues AND Kirtan Leaders, yoga teachers, and workshop presenters has dramatically expanded over the years. To have Deepak Chopra, Prem Baba, so many amazing yoga teachers, and an incredibly diverse array of Kirtan artists… this is really amazing to see.”

Jai Uttal had been leading weeklong Kirtan Camps for six years when Silberfein first told him about his idea for Bhakti Fest. The musician with a traditional rock background, infused with Indian and Brazilian instruments and beats said, “Yes, it’s the perfect time!” He felt his students were longing for a bigger-scale Bhakti gathering. “The community of devotees has grown and expanded like ripples in a lake. The more we toss in our tiny pebbles of love, the greater are the waves of compassion and caring.”

Silberfein, in his own way, was shaking those stones for decades.

“During the time from Woodstock to September 2009, I started the first natural food store in Southern California,” Silberfein explains, “and created a center which hosted all the great saints and gurus that came to the U.S. during the ’70s, ’80s, ’90s, and 2000s, such as Baba Muktananda, Amma(chi), Kalu Rimpoche, Yogi Bhajan, etc. This is where the kirtan movement first got started in the ’70s with Krishna Das, Jai Uttal, Bhagavan Das, and Ram Dass.”

So, it’s not surprising that several of them, like Uttal, are still on board for the 2018 Bhakti Fest.

Nina Rao is a musician, workshop leader, and manager for Krishna Das, a major Bhakti Fest draw. In 2009, she was a bit unsure how the kirtan festival concept would be received. For the last nine years, Rao and Krishna Das have made Bhakti Fest a priority on their hectic travel schedule.

“I liked the idea of doing the festival in the beautiful natural setting of Joshua Tree, no alcohol/no drugs, great teachers/leaders invited to share/teach, vegetarian food, and conscious vendors, etc. And also making camping as an option for accommodation makes is more affordable for some.” She also applauds the organizers for the “VERY full schedule of great classes – teachings, workshops, music, yoga, meditation and the opportunity to try new things all in one place.”

The Ripening of the Higher Conscious Getaways

Today’s traveler oftentimes is seeking more than surf, ski resorts, or spas.  More people are seeking to find meaning during their days or weeks off.  Bhakti Fest is a great place for people to deepen their spirituality, kirtan, yoga or meditation practices, personal development, and understanding of ancient teachings.

In the last ten years, spirituality and yoga have sprouted everywhere. Singer/dancer Donna De Lory grew up in Nashville, entrenched in the non-traditional world, and always aware of the Woodstock scene. “Oh my gosh, there were so many references to Woodstock growing up,” she recalls. While she relished living in the south, country music never rang true for her. For 20 years, she was a backup singer and dancer for Madonna.

Then, fellow Bhakti musicians, Girish and David Newman helped bring De Lory to her true north. “We all felt we were part of a movement…like Woodstock…of people wanting to come together and expand their consciousness and go deeper within.” 2018 is her tenth year chanting a blend of world music, mantras, and electronica at Bhakti Fest which she calls “Woodstock without the drugs.”

Although she may have said goodbye to the “Material Girl,” she sees parallels with her Madonna road trips and the Bhakti Fests.

“(Madonna fans) were so joy-filled. They never stopped smiling.” Furthermore, Madonna concert-goers knew all the lyrics. “It was a huge singalong to the point that we couldn’t hear ourselves.” Like Bhakti Fest. “It’s so beautiful. And, it gets more and more beautiful every year.” There’s a mix and match of musicians and yogis on stage and in the yoga tents. Many of the yoga instructors are musicians and vice versa.

“People want to dance, and sing together. It’s in our DNA. To have this celebration, together.” From hip hop to Sufi music to traditional Indian ragas, the common ground is devotion and allowing oneself to let loose.