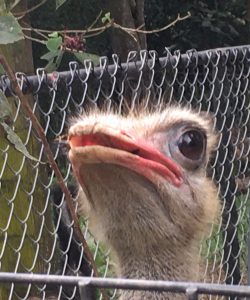 It’s no surprise that people from all over the world head to Costa Rica to get close to nature. Part of the attraction is to get close to birds, animals, insects that aren’t normally in your own backyard. The biodiversity, bolstered by a strong tourism infrastructure, and environmental laws, makes it a natural for people to want to spend time in a country where more than 25 percent of its land is protected as national parks or reserves.

According to the Costa Rican Embassy in Washington, D.C., the country’s “biological heritage, the product of millions of years of evolution, presents us a spectacle of a nature not processed and undomesticated. Its natural wealth, both in species and ecosystems, is partly explained by its geographical position.”

Pretty much anywhere you go in Costa Rica, you can spot an interesting animal, insect or bird, amid lush vistas. While many tourists travel from one edge of the country to another in search of biodiversity, some treasures are right by the capital. One is within walking distance from the old airport (now a lovely museum) in central San Jose. The second is near the SJO airport in Alajuela.

Largest Collection from the Animal Kingdom

First off, La Salle Museum of Natural Sciences is open seven days a week.  Second, it’s on the edge of La Sabana Park, which in and of itself should be a destination for travelers.

La Salle is not a mega modern or fancy place. There are no interactive displays or award-winning architecture. Nonetheless, La Salle is said to be the best museum of its kind in Latin America.  With the exception of the dinosaurs displayed, the thousands and thousands of living creatures displayed are real. Just not alive.

Somehow, they squeeze more than 70,000 specimens into this small museum. For example, La Salle boasts one of the best collections of shells and mollusks in Latin America. Approximately 15,000 examples represent nearly 5,000 species.  Next, the entomology wing showcases 8,400 butterflies representing 1,200 species. As with many of the collections here, most of what’s exhibited is representative of Costa Rica. However, there are intricately-patterned winged varieties from Malaysia to Sri Lanka.

As the sizes of the specimens increase, the numbers displayed decrease. Consider that there are 1,400 birds and 400 mammals in this quiet museum, along with fish, reptiles, fossils and minerals.

It’s a very unassuming place on the outside, and inside. The ticket office fits behind a small open window. There are a few items on display for sale, including 3-D dinosaur puzzles, coloring books, and other souvenirs. Within the office, is a portrait photo of Franklin Chang. Why many may not recognize his image, for Costa Ricans, he’s an icon. Likewise, for many Hispanic Americans, his face and name are well-known.

At the age of 18, he arrived in the U.S. with no knowledge of English. And, just $50. He ultimately earned a Ph.D. from MIT. By 1981, he became a NASA astronaut and tied the record for the most space shuttle missions.

Today, a U.S. citizen, he often makes public appearances at schools and large events to encourage kids interested in science and technology. However, he doesn’t forget where he came from. The woman in the office at the museum says with pride that Chang graduated from La Salle, the educational institution that established the museum. Furthermore, Chang was instrumental in the expansion of the natural sciences museum.

When Chang was just a kid, one of the school’s science teachers collected life science specimens. Gradually, he needed more and more space for his collections.  His passion spread. As a result, students and friends of the school began to donate more specimens. Hence, all the items at La Salle are authentic. Furthermore, none of the animals were harmed or killed to be on display.

Next off, an exceptional place featured on Animal Planet. The Zoo Ave Rescue Center. What makes this even more of a don’t miss destination, is the fact that it’s just 15 minutes from SJO, the largest and busiest airport in Costa Rica. While SJO is commonly called the San Jose airport, it’s actually located in Alajuela, where Zoo Ave is.

Zoo Ave, originally a zoo, was converted into a non-profit sanctuary in 1991. Its founder, hoped to create a more positive environment for the animals, nurse them back to health, release them when possible, and at the same time educate the public.

Here, there are more than 125 animal species on a 34-acre oasis.  Just as at the La Salle museum where none of the animals were harmed or exploited for the sake of visitors, none of the animals at Zoo Ave were harmed or captured for display purposes. Rather, these are all rescued animals, and the center strives to return as many as possible to the wild.  Signs throughout, showcase the number of animals released to their natural habitats. Among the more than 50 animal species that Zoo Ave cared for, and freed, are 480 black-faced solitaire birds. As such, Zoo Ave is certified as part of the Global Federation of Animal Sanctuaries (GFAS).

According to the Worldwide Zoo Database, “Every year Rescate Animal Zooave in Alajuela admits approximately 2,800 orphaned, injured and confiscated wild mammals, birds, and reptiles. Some animals are too vulnerable to be released back into the wild and therefore require long-term care. Over the years tens of thousands of shrubs and trees have been planted, this is an ongoing effort and a great deal of care and effort goes into the continuous restoration of the Wildlife environment where visitors are able to see and enjoy the wide range of animals in their natural habitat.”

Also open daily, the center is family-friendly and wheelchair accessible. The admission fee is a bit steep, but the donation supports the non-profit endeavors. Additionally, you can purchase souvenirs, or have a bite at the Zoo Ave restaurant.