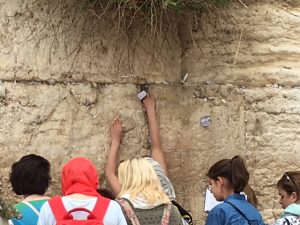 The Wailing, or Western, Wall is considered one of the holiest places on earth. People from all over the world, of different religions, come and pray here. At any given time, there may be hundreds of men and hundreds of women, representing all faiths and cultures, at the wall.

Tourism to Israel has spiked significantly in the last few years. Jerusalem is the #1 destination, and the tourists are overwhelmingly not Jewish. While Christians lead the tourist industry, Asian tourism is growing at a meteor rate. According to The Jerusalem Post, “a new route from Shanghai has helped lead to a 46 percent increase in Chinese tourism since 2016 and a 139 percent increase from 2015.”

Regardless of one’s country of origin, or religion, they share in the customs at the  Western Wall. They approach with respect. They touch the wall, their fingers linger in contact for quite some time. Whatever their preferred language, they pray at the wall — silently, in whispers, out loud, or in writing. With prayers in hand, they find a special spot to insert them in the crevices. Many believe that all prayers here are sent to heaven.

Personal Experiences at the Wall

Karla Londono sat at a trendy cafe and carefully wrote out her prayer before visiting the wall. The Western Wall was the site that she was most interested in visiting on a recent trip to Israel. As a Catholic, she connected with her deceased grandmother at the wall.   Her grandmother, a devout Catholic, had always wanted to visit the Holy Land.

Steve Rubin, of Orlando, Florida spent two hours watching, praying, and crying at the wall. “It was a very special/charged place. All the prayers that have been shared there for so long made it a very tangible feeling, very strong, at least for me.  I could feel the timelessness of humans and our prayers. It brought me to tears instantly, as soon as I laid my hands and head on it, which is not something that happens so quickly for me.”

Sam Steinberg was just a college-aged guy with no religious or spiritual connections when he first visited Israel.  Yet, “his visit to the wall was very moving,” explains his wife. “He felt it was a spiritual experience and he was moved to tears,” as he watched the men pray, and boys becoming men here.

Just as tourism has increased exponentially at the wall, there has also been a surge in rites of passages like hair cuttings, and bar mitzvahs. The Western Wall Heritage Foundation guides can conduct bar or bat mitzvahs in Hebrew, English, Russian, French, and Spanish. Recently a group of Ethiopian men celebrated bar mitzvahs at the wall, and octogenarians have traveled here for the customary act.

A kids’ brochure, in English, makes it easy for foreigners to explain the site to their kids.  With lots of colors and simple words, the booklet explains how “Jerusalem is the city that brings everyone together.  Adults and children from around the world come here to visit, to touch, to feel, and to pray.”

Other factoids talk about the history of the site.

Isaiah called the temple “a home for all nations,” or a spiritual gathering place, regardless of one’s chosen religion. That’s what one sees today, thousands of years later. The wall has withstood earthquakes, ransacking, fires, and destruction by the Romans, Moors, and Babylonians. More recently, politics attempted to obliterate the wall.

1) Women and men enter different sides to reach the wall.

2) Women must cover their shoulders with sleeves or scarves.

3) No cell phones are allowed. On Shabbat, no photography, cell phone use, or note-taking is allowed.

4) Bring a note, or prayer, on a very small piece of paper, to leave in the tight crevices of the wall. Space is limited, even though twice a year, the prayers are removed from the crevices and buried at the Mount of Olives.

5) To show respect, try not to have your back face the wall.