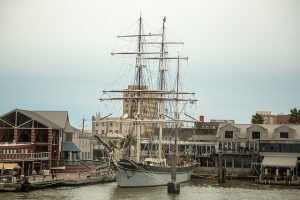 Like so many Americans, my grandparents arrived at Ellis Island, penniless and knowing no English.  I equate the New York immigration icon with the Statue of Liberty and Emma Lazarus’ welcoming statement, “give me your tired, your poor, your huddled masses yearning to breathe free…”

Galveston Island seems completely the opposite of Ellis Island. Galveston Island has warm beaches and long piers that are popular for boating, fishing, surfing, and cruise ships.

The east Texas island has a laid-back feel, where no one seems to be in a hurry. There are no rush hour traffic jams, and there’s plenty of metered parking at the boardwalk or some of the popular piers.

The architecture, much of it built by Irish and German immigrant architects, reminds me of Jimmy Buffet blended with Louisa May Alcott. Old style Victorian structures, some of which were ordered by the original owners from the Sears Roebuck catalog, often are painted in Caribbean or Miami art deco pastels. Galveston homes tend to be made of wood or brick with latticework and porches. Many are built on stilts, whereas in New York City it’s common to live below ground in “garden apartments” or soaring above the street level in skyscrapers.

Today’s Galveston is a sleepy step sister to Houston, which is only 50 miles northwest. However, at one time the island was leagues ahead of the bustling oil center, proving that G does come before H.

Michel Menard, a French Canadian, founded Galveston in 1836. Within two years, there were 2,000 people living on the isolated strip of land, formerly known as Snake Island, since reptiles were the early inhabitants.

When Texas joined the Union, in 1845, Galveston was the largest city in Texas. That was the same year that began a shipping boon, bringing many immigrants to the shores.

Back in its early settlement days, it took six weeks to sail from Europe to the port city on the Gulf of Mexico. The only form of communication to the island, was by boat until the causeway was completed in 1911 as a hurricane evacuation route.

By 1874, the city was considered the New York of the Gulf for its shipping and banking centers. Six years later, Galveston had a population of 24,000, approximately one-third of whom were black and an almost equal number were immigrants from Germany. There were so many settlers from Germany in the 1800s that it was more common to hear German than English.

An Alsatian Jewish immigrant, Leon Blum, built one of the largest wholesale houses in the south. Blum, along with other rags to riches immigrants including Henry Rosenberg, Harris Kempner, and the Heidenheimers, helped to build the Gulf, Colorado & Santa Fe Railroad which opened in 1879. The oldest continually operating public library in Texas is named after Rosenberg.  Like Rosenberg, most of the contributors to the railroad had stops named after them.

As part of the Great Wave, 200,000 immigrants landed in Galveston. The Bureau of Immigration set up shop here and the small port station on the Gulf of Mexico remained the biggest city in Texas.

In 1900, Galveston was a large and prosperous city in Texas until the Big Storm hit, and 6,000 died. It was the worst recorded disaster in U.S. history.

Between 1906 and 1915, when the city was considered the Second Ellis Island, there were 50,000 immigrants to Galveston. Rabbi Henry Cohen, himself an immigrant from England, helped relocate many Jews fleeing Eastern Europe. An estimated 10,000 entered within a window of just seven years prior to WWI, as part of The Galveston Plan.  Most continued north and west.

To keep in touch with the world, Galveston had many foreign-language newspapers as well as the first African American newspaper in Texas.

The immigration waves slowed down during and after WWII. There was a wave of xenophobia and the U.S. cut closed its doors to many immigrants.  Eventually, Galveston’s next-door neighbor, Houston, began edging out the island.

Despite the major hurricanes, the town that attracted so many tired and poor, huddled masses, still has the fingerprints of the immigrants that shaped the island.