The Mystery of the Mayas 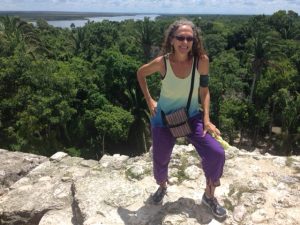 The idea of visiting archaeological ruins is generally to learn about past societies and cultures. In the case of Belize, some of the learnings pose more questions than answers. While the current population is just about 250,000, archeologists suggest that at one time there may have been one to two million people living here. Within a relatively small geographical area, there is a proliferation of Mayan ruins. Most are still hidden away with just a few pieces peeking through jungles or brush.

The five-square-mile area called Lamanai was once an important political and economic and trading center inhabited by 60,000 people. If you can read between the buried treasures, there are 3,000 years of Mayan history at this center by Indian Church, south of Orange Walk. While archeologists estimate 800 ruins remain, only a handful, less than one percent, have been excavated.

The balance between plant life and human life has done a complete about-face. Today, the lush jungle-like atmosphere seems to take over the ruins. When the Maya lived here, the only trees that were visible were the ceibas, considered a sacred tree that connects the underworld with the heavens. Now, there is scant population in the surrounding lands, and the grounds are covered with tall trees everywhere, even on top of some of the limestone pyramids. Among the trees at Lamanai are gumbo limbo aka tourist trees, poisonwood, strangler fig trees, and trumpet trees.

The Journey to The Unknown

While the remains are not nearly as elaborate or immense as those of Chichén Itzá or Teotihuacán, what makes this site unique is its setting — and getting here. While there’s an unpaved road that leads to Lamanai, all the tourists take the “River of Strange People” and the New River Lagoon. The entire river ride is in freshwater that flows southwest to the ocean.

Speed boats lead visitors through 25 miles of mirror-like waters. The sides are spotted with lily pads, mangroves, palm trees, snake cactus, bullet (hardwood) trees, and even a few spider monkeys, Jesus Christ birds, and crocodiles. It’s about a 90-minute trip to Lamanai, factoring in a few spots of interest along the way.

At one spot, your boat idles next to “Happy” the spider monkey. Apparently, he’s always in a good mood because all the boats bring Happy bananas and other treats. The monkey, spoiled by tourists, stretches its long arm into the boat to pick up the treats.

Further down the broad river, the boat slows down by a sugar factory in Tower Hill Village. There’s an Old Master Rum factory nearby. Another point of interest is a former rehab center, which will be turned into a resort. At another spot, the boat slows down considerably to pass through the narrowest passage, Snake’s Alley, which was cut out by the Maya.

About halfway there, are several Mennonite villages. From the boat, you can catch a glimpse of horses and buggies and plenty of farmhouses.

A burial temple that dates back to about 100 BC. Like the Templo Mayor in Mexico City, this temple, and others at Lamanai are built almost like an onion. One layer sits on top of another. As new rulers came into power, they would build upon the existing structures.  The burial temple now stands about 1900 feet high.

The ball court is significantly smaller than others in Latin America. Only two could play on the court at a time. Not unlike other ball courts in Mesoamerica, the winner was sacrificed. What makes it unique, is a huge round disc between the two “goalposts.” Archeologists uncovered 9.2 ccs of liquid mercury underneath the heavy limestone. While they can’t be sure what its purpose was, one theory is that the mercury was made by burning cinnabar from Guatemala at 1000 degrees. This is the only instance of liquid mercury in Mesoamerica. Possibly, it was to be used in event of warfare. Or, an offering to the gods.

The high temple has an image of Chac at the top, which is the rain god. While there are no volcanoes in Belize, there’s evidence of 7,000 obsidian pieces found here, begging the question of their origin.

The jaguar temple is not as large or tall as the high temple, but it stands out for the images of the jaguars. The masks, one on each side, at the bottom, are from 600 A.C. The symbolism of the jaguar is important as the Maya believed that jaguars traveled through the underworld, every night, and rose the next morning with the sun.

Living quarters aren’t that obvious at Lamanai, but they are well defined. The commoners were buried under their houses, with only the rulers being buried at the temples.

Stela 9 has a replica of the stela, front and center. The original is at the Lamanai museum. Five intact skeletons of young boys were discovered here in the 1980s, indicating that human sacrifice was part of the Lamanai culture.

The mask temple has reproductions of two huge Olmecan masks at the bottom. It’s important to note that the Olmecans didn’t like in this part of Mesoamerica. The masks have images of crocodiles, which to them were gods of the underworld. At this site, there were two tombs, one male and one female. That indicates that women were of the ruling class, too, as only the rulers were buried at the temples.

Around 1511, shipwrecked Spaniards took refuge in the Yucatan. It wasn’t until later, closer to 1544, that Spanish friars arrived in Belize with hopes of converting the Maya. At the time, the already shrinking Mayan population worshipped 160 gods. The Spaniards didn’t accept that, so they tried to wipe out the indigenous religious practices and traces.  They still built two catholic churches on the mounds. However, the Maya burned them down. Nonetheless, the Spanish style of burial seems to have influenced the Maya. At Lamanai, burial positions were varied. Until the Spaniards arrived, whereupon they were laid down on their backs with hands at their side or crossed over the chest.

There is no evidence of invasions. Likely, many died from gun powder or smallpox. However, the near obliteration of the Maya remains a mystery.

In the mid-1850s, the British installed a sugar mill nearby, in large part to fuel rum production. Most all the labor were Chinese laborers, many of whom perished from disease.