The Legacy at Longue Vue 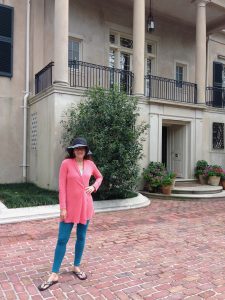 Longue Vue House and Gardens is a lovely antithesis from the craziness of Bourbon Street.  It is tranquil. It is stately. It is a piece of God’s garden, just a few minutes north of the French Quarter. The estate is filled with history, culture, and also, a window into the lives of what the New Orleans States-Item called “the city’s leading philanthropists of the past hundred years.”

Open to tours since 1980, Longue Vue was the dream house of Edith and Edgar Stern. This was the first New Orleans home with air conditioning. Sitting on a ridge ten feet above sea level, it has a basement which is a rarity in New Orleans. The underground space was used as a dark room and a wine cellar.

The Sterns as Home Designers

The landscaping was just as important to the Sterns as the home’s inside amenities. The “dean of American women landscape architects” was flown in from New Hampshire to work on this masterpiece, alongside a pair of architects. The windows in each room are constructed to provide perfect unobstructed views of the gardens.

There are 16 garden areas, and 24 fountains and ponds, on the property which abuts to a golf course, giving it an even grander all-around greenery. Edith was an art enthusiast, and while most of her pieces are in local museums, there’s a garden room in the home with a sampling of her collection.

The Sterns as Philanthropists

The investment at Longue Vue must have been considerable. The even bigger investments were the contributions the Sterns made to build their community, and change mindsets in a pre-segregation era.

Both Edith and Edgar came from families where charitable giving was a given. Edith’s father instilled more than a work ethic in his children. “If you earn a dollar, you keep a third, spend a third and you give a third away,” said Bill Hess, one of the Sterns’ grandsons in a Times-Picayune report. Edith’s father was Julius Rosenwald, the man behind Sear’s Roebuck and company, so we can assume he gave away millions. He believed his success should be transferred to make a mark among societal inequities. He had a soft spot for the downtrodden.

Edgar’s family shared the same commitments. In fact, “Edgar had begun to follow in his parents’ philanthropic footsteps when he met and married Edith Rosenwald in 1921,” according to www.longuevue.com.

Together, they worked for civil rights and educational advancement, especially to improve the future of African-Americans in New Orleans. They were greatly responsible for building Dillard University in New Orleans. They were founders of Flint-Goodridge Teaching Hospital for African-Americans.  They saw the inequities in voter rights, and brought polls to local high schools, and worked on voter registration reform.

Their personal actions echoed their financial contributions. They were the pied pipers showing others that the days of segregation and racism had to end.

In recognition of their lifelong philanthropic efforts, Edgar Stern earned the Times-Picayune Loving Cup in 1930. In 1964, Edith won the Loving Cup for her role in promoting education through the founding of Metairie Park Country Day School and Newcomb Nursery School. In 1977, the New Orleans States-Item acknowledged their contributions –beyond the financial, saying, “Every city should have its own Sterns.”

The Sterns had three children. All of whom were philanthropists as well. Philip was a journalist, congressman and democratic campaign advisor, and researcher. Like his parents, he was ahead of his time, and a born philanthropist. Before an early cancer-related death, he wrote several books, including “The Best Congress Money Can Buy,” on the power of PACS. In 1968, he nominated the first African-American to run as President of the United States. Ralph Nader called him the “most creative, versatile and persistent philanthropist of our generation.”

Edgar Jr. passed away in 2008. A Harvard grad, and WWII vet, he made his mark as a developer. Before building ski resorts in the west, he launched the first television station in New Orleans. Long before it was the tourist mecca, he encouraged major hotel chains to invest in the New Orleans’ French Quarter.

Audrey was the only daughter of Edith and Edgar. She picked up her mother’s love for the arts. She was an art collector and married Thomas Hess, an art historian and the editor of Art News. During the LBJ administration, she was sworn in as a member of the board of advisers of the Federal Reformatory for Women. She was a supporter of the Citizens’ Committee for Children of New York, among other civic and arts entities.

Get a glimpse of the family history and their home and gardens with a guided tour. Open daily, except holidays, until 5 p.m.