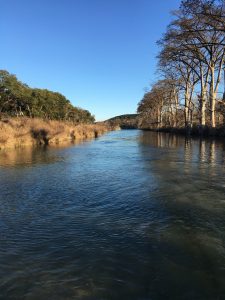 Not everyone needs an expensive mattress that’s guaranteed to provide perfect sleep. For some, being surrounded by fresh air and nature are more important than surround sound stereo connected to flat-screen monitors and free muffins.  If you don’t need a concierge to book your theatre tickets, a park host with trail maps may be a pleasant respite from the daily grind.

Consider a getaway to a Texas state park, RV resort, or campground as a healthier and less expensive option to the traditional road trip. The sites, scattered across the region, are distanced from the neon retail signs, traffic tensions, and sounds of sirens, but close enough to gas stations or grocery stores.

In Central Texas, where it snows about once every ten years, both snowbirds and locals soak in the stress-free beauties of nature, reverting to some of the simpler joys in life. Campers can cook on the grill, take a spin in the water, hike, or bike through the woods year-round.

Frommer’s Best RV & Tent Campgrounds in the U.S.A notes, “Texans are proud of their state’s size, natural beauty, colorful history, and rich culture…The Lone Star State can be overwhelming in its relentless abundance of things to do and places to visit.”

The U.S. Army Corps of Engineers (recreation.gov) runs more than two dozen campsites in the state of Texas, all of which have RV pads, group shelters, electricity, showers, restrooms, and drinking water. Most, also have fishing piers or docks, boat ramps, marinas, and swimming beaches. It may not be the Pacific, but there are many lovely lakes and rivers throughout Central Texas.

Just north of Round Rock and Austin, is the quaint Georgetown. The old town has a traditional town square and historic buildings. A few miles west of the center is Lake Georgetown. The Army Corps has not one, but two parks cradling the lake. Both are popular for visitors year-round. On one chillier than normal winter morning, a man was folding up his pup tent. He had spent the night, camping, while his daughter had a sleepover birthday party with six friends in his RV.

Both the parks at Lake Georgetown have serene hiking trails and beautiful views of the lake from many of the campsites. During the winter, some of the longer-term visitors decorate for the holidays with Christmas lights. Day passes are also available.

Going southwest of Austin, about ten minutes off the main expressway is Canyon Lake. This is a popular weekend getaway for San Antonians and Austinites, given the short distance.  There are nearly a dozen places for camping, a large timeshare resort, and a comedy club. Continuing southwest on I35 is San Marcos. Aside from the large outlet mall, San Marcos is a major destination for tubing down the river.  There are six RV parks and four campground sites in the San Marcos vicinity.

Texas has many rivers that serve as magnets for people wanting to get away from the city scene.

Viana Vallejo likes to drive a few hours from Austin to Yeargan’s River Bend in Concan, Texas. “It’s right on the Frio River, quiet and primitive. They feed bass into the river, so we’ve had good luck catching fish.”  There are 23 shady campsites and six screened shelters plus five RV spots, making the area serene but not isolated. Just north of Uvalde, you can reach Yeargan’s taking the colorful back roads through Boerne and Canyon Lake, or take I35 past San Antonio and I90 west beyond Castroville.

Other options for those wanting a riverside vacation are the Blanco State Park and Guadalupe River State Park. Both these state parks are north of San Antonio and west of Austin, off US 281. They are highly visited during the summer when families can splash in the water, or participate in guided nature walks. Blanco State Park offers canoe, tube, and kayak rentals.

Sherrie Reimers, of Beeville, finds it’s worth the long drive here to Hill Country State Natural Area. The equine endurance riding national champion says, “The trails are beautiful, marked well, and quite varied … from flat to hills to rocks to river.  There are several nice campsites, whether you are with a group or planning to be on your own.  Some are very secluded, and others quite social … it’s a beautiful Texas resource for horse people.”

Hill Country State Natural Area boasts 40 miles of multi-use trails with mixed terrain. This is not a park for swimming or fishing, nor is potable water available. However, the park has guides available for horse riding, mountain biking, and hayrides, and horses are available on-site, or you can bring your own.

East of Bandera, just nine miles off Highway 281 and Johnson City is Pedernales Falls State Park, which Frommer’s considers to have some of the most beautiful campsites in the state. There are 20 miles of trails, and plenty of bird watching here. Canyons reach up to 2,000 feet in elevation

Hill Country, Blanco, Guadalupe, and Pedernales are all managed by Texas Parks and Wildlife, open year-round to campers or RVers. They also rent cabins. Fees range around $20 per night. A day pass is $4 per person, kids 12 and under are free. Given the limited number of RV sites at Blanco, and the inherent appeal of this park, it’s best to book at least six months in advance (www.reserveamerica.com or www.texasstateparks.org)

For those that really want to be on the coast, the character of Galveston Island seems light years away from mainland Texas. Yet, it’s only a 45-minute drive from Houston or 30-minutes from the NASA attractions.

Jamaica Beach RV Park is a great destination for people wanting a few days or a few months. It is a short walk from the miles of sandy Gulf beaches where you can swim, boat, or fish. For kayak fishing, many prefer the Intercoastal Waterway just west a few minutes.  Jamaica Beach is a fairly new family-owned and managed park that caters to its guests with amenities such as popcorn and video rentals, free wi-fi, pizza delivery, miniature golf, two swimming, and hot tub areas, and even a few exotic animals for children to view and feed.

On the other side of the Gulf is Port Aransas. Port A is a favorite spot for Central Texans. Like Galveston, it doesn’t seem to fit in the heart of Texas. It has more of a Jimmy Buffet and Key West feel where anything goes. There are several places to camp out here, but Mustang Island State Park is one of the largest. Run by the Texas Parks and Wildlife, year-round, there are 300 campsites with covered shelters and BBQ pits.

Several promotional offers are available for those wanting to sample parks or frequent them more often. For an annual fee, the Texas State Park Pass gives you unlimited daytime access at more than 90 state parks, and special discounts for camping. Plus, seniors and veterans get special rates at many, so ask first.