The Buddha at Sarnath 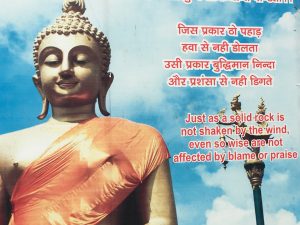 Varanasi is one of the oldest cities in the world. The center of Sanskrit, it is one of the most sacred places for Hindus. In Rudyard Kipling’s book, “Kim,” he mentions the River Ganges purifies the most impure of people, and how the sanctity of the river draws people from afar.

Indeed, 5.9 million people headed to this pilgrimage site in 2016. The city has outgrown itself. It no longer has a visible purity essence. However, just a short distance away from Varanasi is Sarnath, considered the most sacred of Buddhist places.

Sarnath has all the holiness, sans overcrowding, garbage dumping, or neglectful decay.

From Varanasi to Sarnath

Sarnath is just six miles, officially, from Varanasi. But given the heavy traffic and congestion in Varanasi, it takes almost an hour to get from one place to the next, in a private car. When you finally arrive in Sarnath, it is a decidedly different feel from Varanasi. There are large tour buses, and plenty of tourists, but the traffic and lines are easily manageable. Plus, there is a sense of quiet and peacefulness throughout.

The crowded city of Varanasi seems to sprawl out forever.  Headed from Varanasi to Sarnath, you get a good glimpse of impoverished Indian lifestyles. At one point, you cross a bridge, and the city seems to die down. Or rather, it is transformed into a tent city for the poor. Rather than looking the other way, open your eyes. Acknowledge how others live…in many countries. Be thankful for your blessings. And, give back. Not by throwing coins or candies at beggars, but by supporting a non-profit working to make a difference in India. Be like the Buddha — or Jesus, or any of the holy ones.

Historical Highlights of the Buddha

On the Tourist Trail

There are several prime tourist destinations in Sarnath.

First off, don’t miss the museum. Run by the government, admission is nominal. Moreover, it boasts “clean bathrooms” that live up to the name. Beyond the bathrooms, and a small but nice gift shop, there’s plenty to see at the museum. On prominent display is a red bodhisattva, donated by a friar from Mathura. Just outside of Vrindavan, Mathura is one of the holiest sites for Vaishnavas. Mathura was one of the areas through which the Buddha passed on his long journey. Another interesting display at the museum is a photographic gallery of the most outstanding relics that were found in the area.

After viewing the images of the relics, check them out first hand. There’s a separate admission to the archaeological zone. Note, that all tickets are purchased in one spot, across from the museum. Finally,

Then, take a stroll to the zoo and the 350-acre Deer Park where the Buddhist temple and monuments to the Buddha sit. This includes the bodhi tree and replicas of the Buddha and his sermon, translated into dozens of languages.  While a separate entrance fee is charged for the zoo, you can leisurely enjoy the open access area for several hours, if you’re not in a hurry.

Sarnath is also important to Jains. There is a lovely Jain temple here, that is on the Jains’ pilgrimage as well. The 11th Jain Lord Shreyanash Nath was born in Sarnath.

Finally, if you want to spend most of the day in Sarnath, there are plenty of street vendors, for snacks and drinks, and a few dining spots are across the street from the main temple.

Note: as with most sacred places in India, shoes must be left outside. At the Jain temple, no leather goods, i.e. belts can be worn, and socks must also be taken off.