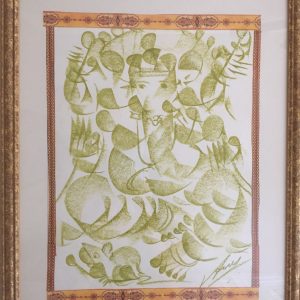 Just last week, The New York Times published a surprising travel tip. Plan less = less stress. The article noted that although that sounds counterintuitive, the key is spontaneity. “For the last five years not planning more than a few days in advance has led to incredible opportunities,” the author wrote.

I’ve felt pretty nerve-wracked when I didn’t pre-book accommodations in Mexico and Spain. So I don’t recommend taking that route. At the same time, my itinerary isn’t like a football playbook. When I let things unravel, there’s time to savor the unexpected.

On my recent trip to India, I locked in all my accommodations and train/air/bus tickets. However, in each town, I asked locals about things to do. Additionally, I listened to my state of mind, and energy. As a result, one of my greatest escapades was not from tourist books. I simply followed my inner feelings.

Going with the Flow in Varanasi

Varanasi (aka Benares and Kashi) is an extremely chaotic city in Northeastern India. Many don’t enjoy it. Some say you shouldn’t visit till you have gotten your feet plenty wet in India. And then, there are those that fall in love with the oldest city in India, which now has more than one million inhabitants. For me, it was a “must-visit” sacred Hindu spot.

Once I got off the train, I ignored my to-do list. I got into the groove. I smelled the roses.

Looking Past a Storefront

Shopping is never on my agenda. However, after early morning prayers and yoga at the Ganges river, followed by breakfast at a delightful rooftop cafe, I was drawn to a storefront. Out of all the endless shops, I stuck my head — and then shoeless feet —  in just this one. Similar to an incredible experience in Pushkar, I can’t explain what made me even look twice.

Like in Pushkar, time stood still. I bought nothing. But walked out with so much. Here’s a snapshot of what I relished, far greater than a museum or a boat ride. Getting to know real people. Interesting, kind-hearted, and talented.

Ashok and Vijay are two of ten siblings. For generations, the males have been carving deities out of stone. Ashok ushered me into their multi-family residence beyond the shop. We chatted. Shared stories. He introduced me to other family members, young and old.

Ashok recalled how he learned to carve stones, large and small. “All time I sit with papa. Sometimes I broke (what I was carving.). Papa would say, ‘Again!’”

He had such a gentle nature and mannerisms, you could almost visualize how he must be ever so gentle as he carves. Some of the pieces were extremely precise and highly detailed miniatures. Carving is meditative to Ashok. “Working, working, working. Stone is the energy. Nature. Mountain.  It’s power.”

While Ashok oozed a meditative calm, the younger Vijay was like a roadrunner with colors in his hand.   Vijay has spent 56 hours non-stop, drawing his favorite god. Ganesha. The elephant with a twisted trunk.

A back room was filled with Vijay’s drawings. Shelves, floor to ceiling, stashed with drawing pads. Piles of sketchpads filled the floor.  Tucked into a few empty corners of the walls were newspaper articles about Vijay’s work. Headlines read, “Worshipping Ganesh with a paintbrush.” “Artist eyes another Ganesh record…fashioning 3,500 images non-stop in 51 hours.”

Almost all featured sketches in this backroom were of Ganesha. I was intrigued with his devotion to this deity known as the overcomer of obstacles. Sitting on the floor, I rummaged through the most expansive collection of Ganesha. “Ganesh is the honor of God. Ganesh is the good brain, giving good luck…happiness always.”

While he graduated with a degree in fine arts, Vijay emphasized that everyone’s first guru is their mother. “Your mother is your first, first, and first teacher.”

Apparently, he wasn’t as interested in the stonework that his father taught Ashok and the other siblings. Despite the fact that he has sculpted 21,000 Ganeshas in his lifetime, his elephant legacy clearly will be on paper.  He began praying to Ganesha at the age of four. Drawing the elephant god by age eight. He has etched the deity on seeds and grains of rice and has painted the god blindfolded at numerous public shows.

“I make a lot of exhibitions.” Three times he was invited by the government to display his elephant gods in Dharamshala (where the Dalai Lama resides), among other places. The prolific artist may draw 100 images before he selects just one for the exhibit.

Not only is he prolific, but he also feels protected by a higher source. Or, rather, his Ganeshas are protected.  One of his drawing books was badly worn from critter nibblings. The edges of all the pages, possibly 50 deep, were frayed. Vijay proudly noted that no mouse ever gnawed at the images of Ganesha

“Art is the way of the life. Hidden beauty. Spiritual height,” for Vijay. It also seemed to be his drug. Regardless of what fueled him, he noted that there are messages in his paintings. Sometimes, he works to the sound of tabla drumming.

The thought behind the art is extremely important, he emphasized. “All my paintings have a story.”

The colors all have meaning to him as well. “There is depth in light. All religions love white,” which he equated to sweetness. Black and white, too, are important. While red, for many, represents blood, it has a different meaning to Vijay. Equality. Equality because we all bleed the same color. Green is happiness. Orange is luck. While blue, not surprisingly, represents water and sky.

The sense of bliss carried over to me.  I returned the next day to bring back a Ganesha sketch to remember the men I met, thanks to spontaneity and following my inner travel guide.