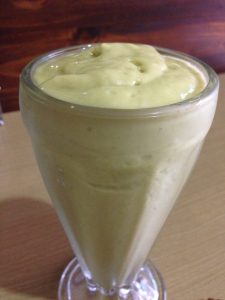 One of the highlights of travel is savoring great dishes — and drinks. For many with dietary restrictions, New Orleans can put you in a pickle.

Enter, The Sneaky Pickle in the Bywater.

This was recommended to me by a non-vegetarian local. The Sneaky Pickle is mostly vegan, and if you skip the desserts and bread, it’s not hard to find gluten-free or sugar-free options. They have several salads, including a dynamite tofu cauliflower “buffalo wing” bowl. For drinks, they serve coffees and teas, and several healthier sodas. As a Texan in Louisiana, I was thrilled to see my favorite Mexican sparkling water, Topo Chico.

Everything is made from scratch here. If you’re kosher, all their meat is cooked in separate pans, so there’s no mixing of dairy and meat. Actually, it’s mostly parve food. Cheese or meat or more like add-ons here.

There are no kosher dill pickles here.  Rather, pickled beets. Pickled peppers. Pickled jicama. You get the gist. Sit inside or out. Hang out with the wifi connection as you try some fresh local food, made with love.

Don’t Shy Away From Shaya.

Getting closer to kosher foods, Shaya was named one of the best restaurants in New Orleans. It’s a sleek, contemporary Israeli restaurant on hip Magazine Street. They have their own oven to make pita bread, so it’s all served hot and puffy.

Shaya isn’t a vegetarian restaurant. Nor, is it kosher. But it’s easy to go meatless or dairy-free here, or gluten-free if you can skip what they say is the best pita in NOLA. Beyond falafel, hummus, baba ganoush, and tabouleh, they serve curried cauliflower, Israeli cucumber za’atar salad, Bulgarian eggplant, pickled veggies, roasted brussels sprouts, and cabbage.

In Search of Mr. Superfood Bar.

This is the spot for people wanting super healthy options. Superfood is on the very strollable Magazine Street. It’s just a few blocks away from Shaya, but the ambiance is very different. It’s small and quick service.  Whether you want a full meal, or a juice, smoothie, or dessert pick-me-up, this is a great place to drop in, and get a tasty dose of Superfood.

Raw. Certified Organic. Farm-to-table. Vegan. G-F. Great buzz words that apply to most of their drinks and dishes. Avocolada. Shhh. Protein Purity. The Work Out. Beta Beat It. Just the names they’ve given their drinks deserve some kudos.

I’m a picky eater. I felt at home here. While much on the menu would have made a great dinner for me, they are open 8 a.m. to 6 p.m. Monday to Saturdays, with shorter hours on Sundays.

There’s a 100 percent vegan restaurant with that name, underneath the Swan River Yoga Studio in NOLA.  The Good Karma Cafe may not look that welcoming from the street, but inside there is a large inviting dining area.

Owned by life-long vegetarians, this is far more than a cafe. Open for breakfast, every day but Sunday, if I were in NOLA for a week, I could eat something different here for three meals a day.  Good Karma has an eclectic International cuisine ranging from Southern Traditional, South Indian, Mexican, and modern fusion. They even serve Buddha Bagels, with avocado, cucumber, tomato, and vegan cream cheese.

For my one meal, I ordered a side plate. Vegan meatballs. They tasted just like the cabbage kofta I’ve had before and loved.  I wanted to order a second bowl. Instead, I ordered a Nutty Bliss smoothie and had them modify it to reduce the sugar load. Great choice, too.

They offer a gluten-free bread option if your taste buds want a sandwich, but your belly says no go. You can always go bread-less or rice-less when less can be more.

If you like your chai and coffee, but not the caffeine, decaf espresso is available for a good number of specialty drinks, along with a caffeine-free chai masala. Can I go back to NOLA already?

Seed is Not Just a Bird Food.

For those yearning for a real taste of N’awlins, try Seed on Prytania.  Seed  tries to be “garden-based, NOLA taste.” It’s all vegan here, and mostly organic and local.

For dessert, if you’re not into the sweets, head next door to Cocoally Vegan Boutique. Ally is a passionate vegan artist. So she has fun items for sale, some of which carry vegan messages. Cocoally is a brand that combines the name of her rescue dog, Cocoa, with her first name. She has designed a popular line of onesies, toddler tees, and adult clothes featuring her playful, vividly colored, images. Ally also has a gallery in the French Quarter, Gallery Burguieres.

Ally has her own Vegan Guide to NOLA . A few recommendations she and her sister have are Breads on Oak and Hivolt coffee houses and The Green Fork, a juice bar across the street from Seed. I enjoyed Fair Grinds for decaf dairy-free lattes and coconut almond oatmeal.