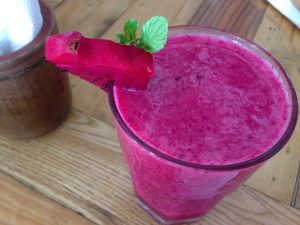 San Juan del Sur (SJDS) is a major destination in Nicaragua, especially among surfers and backpackers. It attracts people from around the world. While some pass-through for a few days, others spend several weeks or months. Still others, hooked by the laid-back culture, friendly people, and ocean, lay their stakes here. With the diversity of the temporary and permanent population changing the landscape, the menu offerings are also adapting. In just one year, there are many more vegan, vegetarian, and gluten-free options and establishments.

Last year, Casa Oro, the largest and most popular hostel in town, closed for renovation. Casa Oro now has a brand new kitchen, bar, and coffee menu. Those headed to the beach can grab a hearty vegetarian Nica breakfast of rice and beans, eggs, homemade cheese and plantains, pancakes or waffles with fruit, yogurt with granola, or fruit salad with egg and toast. Vegans can skip the cheese and eggs, and drink coffee with coconut milk.  Breakfasts cost about five dollars, including coffee.  If you avoid gluten, you won’t go hungry here.

On the lunch menu, there is a mango salad, a chickpea quinoa salad, vegetable pakoras, dal and coconut curry with garbanzos and potatoes, all of which are vegan. Pescatarians will go bananas for the ten-dollar lobster dinner.

The dal and other South Asian dishes are family recipes imparted to the hotel’s cooks. Some of the secret ingredients are mango, ginger, garlic, turmeric, cumin, black pepper, and chili powder. Casa Oro is the only place in SJDS, and possibly Nicaragua, that makes its own chapati. The Casa Oro kitchen staff hand-make the dough and discs, daily. The whole-wheat chapatis are waiting to be cooked and served warm with every order.

For those looking for gluten-free dishes, it may be hard to pass up a freshly made chapati, but the dal and curry plates are hearty enough without the Indian version of the flour tortilla.

For Nicaraguan street food,  you can’t beat tajadas (plantain chips) topped with cabbage salad. Word has it that the best ones in town are at the town square. However, they don’t start serving until after 6 p.m. usually.

If you can’t wait, an authentic Salvadoran pupusería is open for lunch and dinner.  El Pulgarcito is a new addition to San Juan del Sur.  The owners are used to vegans and recommend adding garlic and green squash to your bean and cheese, or just bean base.  The pupusas here are huge and served with a slightly spicy cabbage salad. Prices range from one to two dollars, each.

Julia says finding vegan-friendly food options in San Juan del Sur is pretty easy.  The 22-year-old from Switzerland is staying at Casa Oro. She’s been on this side of the Atlantic for several months and had a difficult time sticking to a strict vegan diet in Cuba. In Costa Rica, she found vegetarian food, but it wasn’t the level or quality of what she has been eating in San Juan.

She enjoys breakfast at Casa Oro that is included in the low cost of the room.  At night, she and the folks she’s traveling with like a bar with a vegan-friendly menu.

“We just went to have dinner in La Republika. Two of us had falafel on pita with vegan tzatziki. It was 120 córdobas (under four dollars).  My other friend ate a falafel burger. They even had  vegan brownies.”

Lea is eating a vegan brownie after guac and tortilla pieces at La Republika. From Germany, she has been vegan for about four years. When she was traipsing through Viet Nam, she said it was hard to find vegan food. “They put eggs in everything. Here it’s really easy.”

The vegan and vegetarian options at La Republika are intentional. Within the last year, the owner collaborated with a vegan chef to update her menu to provide a better variety for the many plant-based eaters that she was finding in San Juan.

Julia agrees with Lea. It’s really easy to be loyal to your dietary choices here.

Another place Julia and her friends have dined is Salud.  She ate the rice, veggie, and tofu bowl, and another time chose the pitaya bowl. This modern corner spot, open for breakfast and lunch, is owned by a vegetarian from Canada. In the six months since it opened, Salud has had a loyal clientele. And, the owner is still upgrading his menu. Next on his menu transformation will be superfood smoothies.

Kristen is from Austin, Texas, arguably one of the most veggie-friendly places in the U.S. Her favorite restaurant dish is Buddha Garden’s Yucca-dilla. Think of a corn tortilla filled with mashed yucca, cashew cheese, pickled cabbage, and avocado.

Buddha Garden was the original veggie place in town. However, the menu was fairly limited, a bit on the expensive side for Nicaragua, and not the greatest for vegan gluten-free eaters.  This year, under new management, the prices are still rather high for Nicaragua, but it’s an entirely vegan, mostly gluten-free menu.  Other popular dishes here are the rice noodle summer rolls and a vegan take on a Nicaraguan stew made with yucca, plantains, squash, cashews, and greens. Michelle and her partner acknowledge that some people want to be able to keep a certain dining style, and the Garden is the closest you may get to that, here.

Casa Jabad aka Chabad House has been in San Juan del Sur for years. More recently they opened a little falafel stand next door. The all-vegetarian kosher kitchen can customize your falafel or sabich wrap or salad. Their homemade pita and fried eggplant are big draws, as is the price.  A falafel wrap is 100 cordobas.

If you like falafel, Wrap and Roll serves an incredibly tasty salad made with falafel and Asian fusion style sauces for about four bucks. While the salad can be served as a wrap, or as is with wonton-like crisps, it’s easily made gluten-free. The owner of this establishment is an American who worked for many years as a food and beverage manager for high-end hotels. He recently catered vegan gluten-free food to a large group in town for several days.  Wrap and Roll also features stir-fry dishes with your choice of noodles or rice. Pick from Korean Teriyaki, Indian yellow curry or Thai peanut to go into the wok.

Smoothie Time is nothing but smoothies, with a good selection that is dairy-free, and you can add protein powder if desired.

Casa Oro makes all their smoothies and juices to order. Maracuyá with pineapple, banana, mango, or pitaya are tropical refreshers. Cantaloupe with banana and orange, or pitaya are other colorful drinks. But the secret gem here is the Oro: orange juice, ginger, turmeric, coconut oil and cinnamon, and black pepper with honey. For just two dollars.

If smoothies and juices aren’t sweet enough for you, Nicaragua is a chocolate-producing country.  Most grocery stores will sell Nicaragua chocolate bars from about 50 to 100 percent cacao. Or, treat yourself to a drink or dessert at the chocolate shop by the main park.  In addition to the pure cacao drinks or chocolates, they recently began promoting their vegan truffles, raw chocolate peanut butter bar, and fruit and cacao tart.

Finally, if you’re leaving San Juan del Sur, the Choco-Museum just opened up a small corner location in San Juan del Sur. You can buy vegan cacao products to take on to your next destination. Cacao pods. Nibs. Scrubs. Spreads. And of course bars.