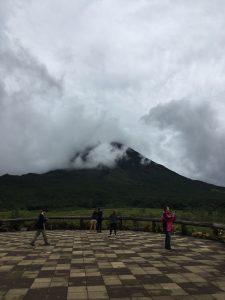 Kate is a European backpacker traveling solo in Costa Rica for a month. Her map, marked up with her proposed itinerary, looks like a wheel. There’s a hub with zigzagging spokes reaching out every which way. She doesn’t like to feel rushed when traveling, so she plans several days in each town. For some destinations, it’s five nights. The pivot point in the center of her map is San Jose. Ample research has led to Kate’s plan to circle back to Central America’s safest capital city each time she heads in another direction.

San Jose is a natural hub. First off, there’s an international airport 20 minutes away. Banks, money exchanges, supermarkets, and pharmacies everywhere. Most importantly, it’s where most all buses begin or end their route. Even those headed to Nicaragua or Panama are from San Jose.

There are literally more than a dozen short tour offerings from San Jose. Among those are the volcanos of Irazú and the old capital city of Cartago which make for a great two-in-one day trip. Another on-your-own jaunt is to Alajuela which can be combined with a tour to coffee plantations and another volcano. However, Arenal volcano is one of the most visited places, especially for day-trippers.

To squeeze as much into one day as possible, you can purchase an all-day guided tour. While the viewing of the volcano is limited, the trip includes four hours at a five-star hot springs resort. Lunch, dinner, and stops along the way are added perks. This is for Type A tourists.  Departure is around 7:30 a.m. and return is close to bedtime.

Arenal last erupted in 1968, destroying two towns, and killing 80 people. Initially, there was no lava. The 900 degrees centigrade gasses, coupled with 200 kilometer/hour ash clouds were the killer forces. Today, 2.5 million tourists visit this area every year, and the country taps into the bio-thermic energy from the volcano to power a significant percentage of the country.

At a stop at Sarchí, a co-op of 40 artisans, most tour-goers sample, and purchase, Costa Rican coffee.

At one point, Costa Rica was the poorest country in Central America, he said. Coffee production began in 1770 before Colombia was in the game, and 100 years before banana plantations were ripe here. The third president of Costa Rica, Braulio Carrillo, initiated incentives for planting and harvesting coffee. Today, coffee is the fifth leading contributor to the country’s GDP ($500M), after bananas, pineapple ($1B), medical devices ($2B), and tourism ($3B). However, the coffee plantations are mostly owned by Costa Ricans, whereas the banana industry is limited to a few foreign companies like Dole and Chiquita. Hence, the pride for coffee rather than bananas.

Kate took the bus on her own to the Caribbean coast.  But to save time, you can opt for a two-day/one-night tour to Tortuguero National Park with pick-up and drop-off at your hotel. The tour company offers a condensed version for day-trippers, and also an option for those that prefer a two-night stay. Accommodations range from a beachfront hostel to a resort filled with monkeys.

Tortuguero may be just 180 kilometers from San Jose. But it is a long trip up the mountains, through the cloud forests, and down to the tropics.  Tours stop along the way for breakfast. Then, to spot sloths. After exiting the rain forests, you can catch a glimpse of the banana plantations’ operations.  But by far, for most, the highlight of the journey is leaving the bus for the final leg.

Tortuguero is an island with no roads or vehicles. So visitors hop aboard a riverboat. While the distance as the crow flies isn’t much, the boatmen snake up and down lagoons and canals for more than 90 minutes. Periodically, the boat will sit in stillness to creep up to a sloth, egret, river otter, monkey, cayman, or iguana.

About 200,000 tourists come to Tortuguero every year. The park covers 76,000 acres. The wildlife, and turtles, as the name implies, are the big draw.  According to the Sea Turtle Conservancy, which runs a museum here, 25,000 turtles laid their eggs here in 2017.

According to the conservancy, “Tortuguero is the most important remaining nesting beach in the western Atlantic Ocean for the Green Turtle.”

When Columbus landed in this area in 1503 he said the turtles were like rocks everywhere. However, man has changed that. The species was nearly obliterated in the last 100 years due to man’s desire to take the meat, eggs, or shells. Now, pollution is a serious threat. Half of all turtles have consumed plastic.  An estimated 60 percent of plastic straws end up on beaches, too.

Originally a lumber center, Tortuguero now is an eco-tourism center. So kids are taught respect for the environment. Colorful garbage bins in animal shapes are visible every 50 meters. The tiny town has its own recycling plant, and recycle receptacles are almost as common as the decorative garbage bins. Murals adorn walls reminding residents about their beautiful natural resources.

Fishing in the protected waters is prohibited, and tourists are all advised to wear dark clothing, and only red lights are allowed near the beaches, so as not to startle the turtles. The community recognizes everyone must do their part to protect the ecosystem and the animals. And, visitors, too.