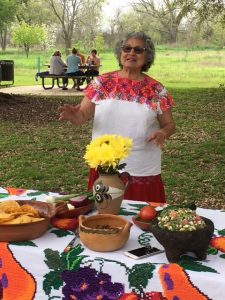 It’s called Alamo City for a reason. Pretty much everyone in San Antonio has seen the Alamo. Even those folks on business trips, weekend getaways, or new military recruits.  The Alamo, the best known of five missions, is smack dab in the center of downtown San Antonio. While the Alamo is one of the biggest tourist attractions, most locals prefer the other four missions on the trail. San Antonio is unique for having five of these World Heritage gems*, all within a ten-minute drive from the city center.

Kids in Texas schools are taught about the missions from the European perspective. History books are whitewashed. The other side of the story needs to be uncovered, respected, and shared. That’s why in 2018, as San Antonio celebrates its tricentennial, American Indians in Texas at the Spanish Colonial Missions (AIT) is offering Yanaguana Mission Heritage Tours. The visits to Missions San Jose, San Juan, Concepcion, and Espada feature the Native narrative.

“We focus on what history books and guides leave out, or forget,” says longstanding AIT Executive Director, Ramon Vasquez. “We’re helping people to understand the reality. Vasquez is on a mission to “tell the complete and accurate story.” He wants visitors, and locals, to “stop living under the wings of John Wayne.”

Even for those that have been to the missions many times, Vasquez provides a refreshing twist of a tour — albeit sometimes disturbing. The most recent group included a couple visiting from Boston, a local tour guide, two university professors, students, and Texans just interested in exploring their roots.

“The history of San Antonio, and contributions of the American Indians, goes way back,” says Vasquez. The original inhabitants were here long before the 16 Canary Islander families landed 300 years ago. And, the Spaniards and Natives co-existed. By 1731, the imposing Mission San Jose had already been built thanks to the labor of hundreds of Native Americans.

Mission San Jose’s Welcome Center is where the tour begins. During the leisurely stroll through the beautiful grounds and inside the church and other buildings, Vasquez talks about the habitat, history, food, and culture of the Natives that lived here.

When it’s time to depart for the next three missions, Vasquez continues his storytelling on a comfortable bus. At the final stop, Mission Native family members greet the guests with a beautiful and varied sampling of Native American dishes like bison and nopales. Before heading back to San Jose on the coach, Vasquez and others, dressed in traditional tribal attire, chant near the hallowed burial grounds of their ancestors.

About the Mission Natives

The land where the Missions extended was alive with hundreds of distinctive bands of people when the first Europeans arrived. The missions were built as communities for the different tribes, NOT as forts, as some people erroneously believe. As the missionaries were intent on building a new Spain, complete with acequias, dams, and Catholic churches, they attempted to destroy the cultures and vestiges of the Natives.  Borrón y cuenta nueva. (Erase everything and begin again). They had little respect for those that inhabited the land.

A video at the San Jose Visitor Center admits, “The friars wiped out the past. One by one, their distinctive (Indigenous) names vanished.”  The first people of San Antonio sacrificed their ways of life to survive. Yet, even that wasn’t enough. After ten years, 70 percent of the Mission Indians perished, in great part from diseases carried over by the Europeans.

The ancestors of the survivors form the backbone of San Antonio, in several ways.

In the 1970s, approximately 70 percent of the residents on the south side of San Antonio were descendants of the original Mission inhabitants. Vasquez can trace his own lineage to those families. In the fight to take over Texas, the Spaniards kept detailed records of the residents. Only Spaniards and those who had been baptized counted. Therefore, people were often mis-or intentionally labeled as ‘Spaniard,’ if they had a drop of White blood so that they could be recognized by the Queen.

The Native Americans lost so much when the Spaniards landed. Their original communities, dwellings, and customs were obliterated. Their language disappeared. They were stripped of their names, taking on the Spanish given and surnames of whoever was appointed as their godfather. They were told to embrace Catholicism and disregard their own spirituality. They even lost their right to rest in peace.

“The injustices are not just historical,” Vasquez says. People were buried here until the 1860s. Although they were given Catholic burials, their graves were not respected. “In 1999, 150 of our remains were returned for proper burial. If they were Irish Catholic, they never would have dug up their graves.” Vasquez points out the site at Mission San Juan, marked by large limestones, flush with the ground, where after several months of sorting through all the boxes, the remains were reinterred.

In essence, the First Nations people by the San Antonio River lost their identities and everything in the physical realm. Almost.

AIT, through the Yanaguana Mission Heritage Tours and other initiatives, is keeping the spirit and customs alive. The non-profit is striving to make the invisible, visible.

“It’s about reversing extinction. Our plight is never-ending. We still have to struggle to tell our story. We want to make sure that our 10,000-year-old history is included. I was made to feel ashamed (of my heritage) as a kid. We’re working hard to reverse that. Our children are re-engaging.”

All the more reason to explore the missions with American Indians in Texas’ Yanaguana Mission Heritage Tours. Rather than take a self-guided or guided tour of the missions from the European perspective, hear statistics, facts and figures, along with personal recollections and anecdotes from the Native perspective.

Vasquez says American Indians have two roads in life. One is our physical presence. The second is spiritual. You try to walk these two roads, balanced. His group is trying to keep that balance and point a spotlight on both those roads, to keep them visible. At the same time, educate San Antonians, and tourists, about the rich American Indian history and heritage at the San Antonio Missions.

To inquire about rates or special promotions, contact AIT at 210-227-4940, aitinfo@aitscm.org.  Or, complete a tour inquiry form at aitscm.org. The next scheduled tour, limited to just 35 participants, is Saturday, April 14 from 9 to 1 p.m. Groups of ten, or more, can be coordinated any time.

*To be included on the World Heritage List, sites must be of “outstanding universal value.”