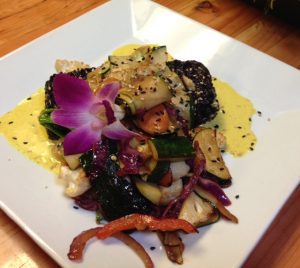 A Harris Poll suggests that there are two million vegans and about seven million vegetarians in the United States.  However, while in Salt Lake City, two servers, in two days, responded to my request for a vegan meal by saying, “We have chicken piccata.” The third said, “Do you eat meat?” Not a good sign. The result? Head for the veg establishments.

Just like pretty much every major city nowadays, vegans have a choice here. SLC’s Buds just made it to BuzzFeed’s 24 Vegan Restaurants That Belong On Your Culinary Bucket List. “This sub shop features all veggie sandwiches all the time. They’re just as sloppy and drool-worthy as any deli; in fact, it’s really hard to tell they’re vegan! Truly delicious and nutritious,” says BuzzFeed.

Two other interesting honors were reported by the Salt Lake City Tribune.

In the heart of downtown, is Zest, a 100 percent vegetarian, gluten-free, and 90 percent vegan restaurant. Zest has a wide assortment of dishes with an international flair. There is a curry dish. A flatbread pizza. Cuban black bean soup. Pasta-free manicotti.  A Moroccan bowl. Brussels sprouts to die for, and the healthiest dairy-free, gluten-free cheese bites. And, plenty of interesting herbal drinks and smoothies.

Small in size, Zest has a nice contemporary ambiance, a sleek bar/counter, and outdoor dining.  The bistro opened a few years ago and is owned by a vegetarian keen on offering organic plant-based foods with flavor and flair. Approximately 30 people work at a greenhouse owned by Zest.

The veg establishments downtown all seem to be four-letter words. Sage first opened as a food cart in 1998, but relocated to the former Jade Room on Central 9th business district on West 900 South. Sage’s Cafe is owned by Ian Brandt, proprietor of several other healthy eateries in Salt Lake: Vertical Diner, Cafe SuperNatural, and Cali’s Natural Foods.

Sage’s Cafe offers a variety of bowls and salads, along with add-ons like blackened tempeh or tofu. Sage’s also serves up several gluten-free desserts including almond flour bars or chocolate peanut butter brownies. Both Sage’s and its sister Vertical Diner, list when dishes are gluten-free (GF) or can be gluten-free (CGF). Vertical, on Southwest Temple, offers most of the traditional American fare, but all completely plant-based. Back in 2009, they were on the Top 10 list for best Faux Chicken Sandwiches, by PETA.

For those who are headed to Park City, while there are no official vegan diners, there are vegan and vegetarian-friendly options. In addition to the ample selections at the Whole Foods Market on Redstone Avenue, there is a Fairweather Natural Foods community market and cafe. Beyond the non-perishables at Fairweather, there are healthy soups and salads, plus organic fruit and green juices, made to order. In the refrigerator section, there are small kale salads, sprouted garbanzo hummus, and plenty of coconut milk or other healthy drink options. Fairweather also has a variety of gluten-free, sugar-free, and/or vegan bakery items including cheese scones, zucchini chocolate chip bars, brownies, and muffins.

Half a mile up from Fairweather is Good Karma with an outdoor seating area. The Sunday brunch menu offers baked challah french toast, huevos rancheros, oatmeal, and granola parfaits. Or, you can order off the standard daily Indo-Persian menu. Vegans or GF folks may want to take advantage of the sag and korma, both of which are dairy-free. For those wanting to skip the gluten or carbs, you can replace the naan and rice with steamed vegetables.

Good Karma’s owner, Houman Ghohary, has been featured on Rachael Raye and will be on the Food Network’s Beat Bobby Flay in 2016. He strives to have healthy options for his guests, and also make a positive contribution to the community and the environment.

“One of the reasons we chose the name Good Karma, was we try to impact the world one day and one customer at a time,” said Ghohary who is an advocate of healthy eating and healthy habits.

“Our eggs are cage-free. All of our curries are gluten-free, and all our vegetarian curry is vegan. We cook everything with grapeseed or coconut oil,” notes Ghohary who opened his Park City spot in 2006 after working all over the world.

Similar to Zest and Sage’s, Good Karma is a farm-to-market vendor with a personal connection with the farmers’ community.

For more information on healthy eating options across the U.S., visit www.HealthyCow.net. For more on vegetarianism, visit www.TheNamasteCounsel.com/yoga-blog