Riding the Blue Birds in Nicaragua 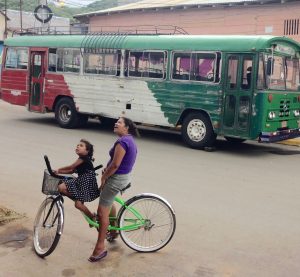 The Blue Bird All American bus isn’t all yellow anymore.  This one is red and yellow outside, with an orange and red interior.  Its age marks are visible in many ways, beyond what the eyespots. Rocking me back to 1976 is what blasts through the speakers: “Ma Baker.” In the last 40 years, I don’t recall hearing that song again, or the name of its recording artist, Boney M.

“This is the story of Ma Baker. The meanest cat from old Chicago town.”

I’m in the Blue Bird taking the long, scenic route. I’ve decided to travel 300 kilometers via four ordinario buses, understanding it’ll be far slower than the express route alternatives. I’m cool with soaking up the local culture along the way and avoiding the big cities.

The Ma Baker-mobile leaves at 8 a.m. There’s a visual sign on the highway that indicates an incline of five degrees. My Blue Bird is clearly not prepared for soaring anything above a few inches.  It can’t seem to climb the imperceptible grade. We move at 10 mph for quite some time.  Finally, the driver shifts into second gear. Then, third. We’re on our way. Stop and go, of course. Mr. All American Blue Bird honks, and his helper waves, for dozens of people at makeshift bus stops along the way. Sometimes, it feels like we come to a quick halt every few blocks.

It takes more than an hour to get to the next town, just 23 kilometers away. Of course, the red and orange bird makes more stops before the end of this journey. It squeezes its way through a narrow street lined on both sides with vendors. The old school bus makes a big turn and we are inside the depot. My Ma Baker man waves to another bus driver and then looks at me to let me know that’s the one I need. As everyone de-boards, the driver’s helper grabs women’s arms to guide them down. For one, he cradles her baby so the mom can manage the steep steps. At times, he tosses passengers heavy sacks or boxes off the bus to clear the way for the passengers. Service. Slow, but sincere. I can’t complain. Plus, it’s my first bus of the day.

I hop off the All American. The next Blue Bird has lettering boasting se hacen viajes especiales (We make trips special).

Before I grab my seat, I buy two small packets of peanuts, flavored with lime and chili, and two small bags of homemade popcorn. About 75 cents for all. Perfect for my breakfast. I can skip the snap and crackle, but I can’t forgo the crunch.

There is a slew of vendors that come on the bus offering food and drink to the passengers waiting to depart. This is what I consider socially responsible capitalism. The pennies I pay go directly to the people that make and sell their foods. No intermediary. No multinationals spending oodles of dough on marketing, packaging, food stabilizers, or coloring. Real food. Really good. Nice and cheap. Helping people that are struggling to make a simple living.

The music begins to modernize by a few years. “Funkytown” by Lipps Inc.

“Gotta make a move. To a town that’s right for me.”

I’m really feeling I gotta make a move. For the past few hours, my knees were pressed up against the metal back of the seat in front of me. No blood moving much in my bod.

“Keep me groovin’ with some energy.  Take me to Funkytown.”

“Gotta move on. Won’t you take me to Funkytown?”

When you are traipsing from one remote area to another part of the countryside, you don’t have the luxury of always getting on and off at bus terminals. Several people let me know when I better catch my next bus. I can’t fall get lost. The Blue Bird riders look out for one another. Or, at least throughout my two months here, I’ve felt that the drivers, helpers, and passengers are always extremely helpful to me.

As I get off the bus, a woman shows me exactly where to pick up my next Blue Bird. I stroll the opposite direction, on purpose. I find a small comedor. I ask if they’re still serving breakfast, and coffee, at 1:30 p.m. “Of course,” the proprietor responds. I’m sitting al fresco, on a Dollar Store type plastic chair, watching the pedi-taxis pass by. She brings me a nice warm plate of rice and beans (gallo pinto) with a fresh tortilla and a black coffee. Since my morning fare was popcorn and peanuts, this feels like a Zagat best-of-the-best. Price of the meal? 75 cents to the owner/cook/waitress.

After a nice healthy lunch, I get another perk. A clean pay toilet with soap and water. It costs more than my coffee, but it’s worth it.  I wait a bare ten minutes for the next Blue Bird. My meal may have brought on a slight stupor. I can’t recall many details. But, I made it from one Blue Bird to the next.

I’m sitting next to a lady with some bulky items, right behind the driver. I ask her if she’s headed to the same place as me. No. She’s getting off earlier. Good. I’ll have more room soon. Two hours later, she’s still next to me, infringing on my already tight space.

This bus plays Latin oldies but goodies like Spain’s Camilo Sesto. Circa 1980s.

This is the final leg, but I’m getting stuck in my seat. I try to move my body weight as much as I can, from one side to the next.

As we trudge on, going higher in the mountains, we are no longer surrounded by the same green lushness as before. It’s drier and cooler. People come on board the bus, selling soda which they pour into small baggies. Once full, they insert a straw into the bag and tie the opening to form a fairly good seal.

A boy comes on board selling gum, and just two little bags of peanuts. My seatmate buys those two bags. One of the merchants gives food to the driver. Several of the people that come on board seem to know the driver or his helper. I can’t tell if they are passengers, or just food/beverage vendors.

About eight hours after I first started out, Blue Bird #4 pulls into a small terminal. My day on the road is over. We averaged 23 miles per hour on this journey, all of which were on good highways. Total cost: about $3.00 plus $1.75 for food and bathroom privileges.

Blue Bird #5 (to be continued)