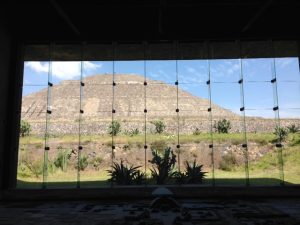 The first step into the past was at Mesa Verde, Colorado 50 years ago. Although history puts me to sleep, I was enthralled here. My imagination was aroused. I could picture adult Pueblos, not much taller than me, climbing up and down amid the 600 cliff dwellings. It was as if I was playing house, in someone’s dwelling that had no resemblance to my carpeted two-story brick and stucco childhood home. Thus began my calling for other worlds, cultures, and languages, and a personal life and career rooted in multiculturalism.

Since the 70s, I keep returning to Teotihuacán and Templo Mayor in Mexico City. I never tire of visiting them. In part, because they’re experiencing urban sprawl. They keep growing, from the archaeologists’ sieves and shovels.

Teotihuacán is sometimes known as the Pyramid of the Sun and the Moon. That short-sighted branding is like calling San Antonio the Tower of the Americas. Teotihuacán stretches about a kilometer and a half.

According to UNESCO, which lists this as a World Heritage Property, “Teotihuacán is one the archaeological sites with the longest history of exploration in Mexico.” Beginning in the 1860s, the digging is still going on today. Perhaps for that reason, it’s hard to estimate the expanse of this community. By some accounts, just a minute fraction of the ruins have been uncovered.

Some estimate the complex was inhabited by 100,000 people over eight square miles. There is evidence that various cultures lived here over time. The structures are spread around a central Avenue of the Dead. The Pyramid of the Sun, for those wanting to climb it, is about 20 stories high with a 225 X 225-meter base. There are about four or five landing spots where you can catch your breath.

This area had a long-lasting zenith, but apparently a quick demise. The City of the Gods was eradicated in the 7th century, most likely by deliberate razing by fire and smashing of sculptures. Its remains have colored future generations, and even influenced the art and architecture of Diego Rivera.

Closer to Diego’s home and art, in the heart of Mexico City, is the zócalo, which was the opening scene in the latest James Bond movie. The central square is flanked by the cathedral and the Palacio Nacional, where one of Diego’s masterpiece murals is displayed. Tucked behind and to the right of the cathedral is the Templo Mayor.

This is a prime example of how the Spaniards demolished signs of the indigenous by building the catholic places of worship directly over native sacred grounds. The Templo Mayor is smack dab in the center of modern-day Mexico City. So, it’s been a logistical nightmare for the excavators. I’ve seen the progress over the last four decades. Each visit is more and more fulfilling, as the finds are getting more and more incredible. Today, there is a museum hidden from view that is well worth the visit. Some of the objects on display here look like replicas. It’s hard to imagine all of these pieces uncovered and put back together in remarkably good condition, after almost 700 years.

There are many similarities between Teotihuacán and Templo Mayor. Some may prefer to visit the pyramids for a feel of how the ancients lived close to nature. I find Templo Mayor fascinating from the history of the Spaniards obliterating all signs of the former cultures. Every “find,” I see as a goal for the archaeologists — and the indigenous.

The Templo Mayor was the belly, or center, of the universe for the Mexicas. Back in 1913, exploration of the site began. However, in 1978, construction workers found a large stone with the image of one of the gods which attracted greater interest. As today’s scientific teams tackle the buried ruins, they find more proof of the engineers, architects, interior designers, and artists of the past. The land that was the center of their universe was not ideal for construction. Due to sinking and flooding, new layers of buildings were constructed over buildings, almost like lasagna noodles.

An Urban Archaeological Program began in 1991 to uncover other artifacts in the surrounding blocks of Mexico City’s historic city center.

Tips: Allow the better part of a day at Teotihuacán. Bring a hat, sunglasses, a water bottle, snacks and cash. For the first time visitor, consider a guided tour. There are plenty of guides flocking around the entrances. Northeast of Mexico City, it takes about an hour to get there, by car, or metro and bus.