Rebuild and Recycle in Galveston 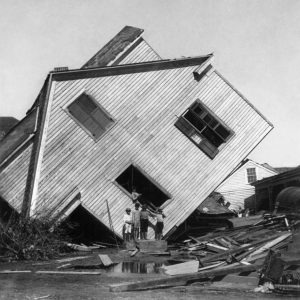 For those of us who have not weathered a major tropical storm, it is hard to fathom the strength and brutality that nature can play.

Galveston survived the worst hurricane in history with The Great Storm of 1900, after which was built a 17-foot-high seawall to prevent devastation from future natural disasters.  Yet, in 2008, Hurricane Ike was fiendish. Despite “hurricane-proof” construction, storm windows, stilts, and the ten-mile-long seawall, nothing could hold back the 110-mile winds and 15-foot surges.

Shortly after the 1900 destruction, the Moody family bought a recently built mansion a mile away from the shore at a bargain price. All the other bidders got cold feet. More than a hundred years later, during Hurricane Ike, the Romanesque Moody estate had five feet of water on its ground level. Five years later, that floor remains closed to the public until restoration is complete.

The Strand, although closer to the shoreline, has always been a popular street to gather, shop and dine. Here too, the seawall seemed to be on jury duty as some businesses filled with up to16 feet of water rushing through.

Galvestonians are accustomed to the heavy storms, and apparently, take these things a bit in stride.  A vintage store called Somewhere in Time lost almost all its contents during the 2008 Hurricane. They now sell “Ike relics,” a handful of remnants that survived the storm and the floods. Art galleries sell exquisite bowls that have been tooled from Hurricane Ike trees.  They are available in a wide range of natural wood tones, representing the spectrum of trees that didn’t escape Ike’s wrath.

A Street Tree Survey, prepared by the Texas Forest Service, listed the top ten species at the time of Hurricane Ike. Only Palm and Oleanders (originally brought from Jamaica) seemed resistant to the storm. 100 percent of Sycamores, 97 percent of Chinese Tallowtrees, and 88 percent of Pecans and Magnolias succumbed to Ike.  The surveyors estimated that 31,000 private trees died as a result of Ike, and another 10,840 public area trees were doomed.  The landscaping value of the mature trees, not including replacement costs, was estimated at just under $50,000,000.

To honor both the environment and the city’s history, some residents and artisans decided to create lasting memorials with the felled wood. A handful of tree sculptors were commissioned by local residents, mostly in the historical district, to create some three dozen works of art from the destroyed trees. The artists took chain saws and chisels to craft elaborate works of art ranging from a geisha girl to a guitar.

They now grace beautiful homes in the historic district, and are part of a tree sculpture walking tour between the four blocks of Sealy and Post Office, from 8th Street to 20th Street.  On a street with a whimsical name like Winnie, artists have recreated Toto and the Tin Man and a yellow lab out of tree stumps.

One of the artists explains his work as “lemons to lemonade.”

The project was so noteworthy, that an article appeared in Texas Monthly and New York Times online about the rebirth of the trees. “What Ike Hath Done, Artists Shall Transform.”  These sculptures are living tributes to the creativity and tenacity of the Galvestonians.