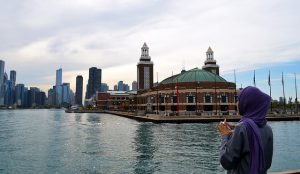 In most urban areas, we see large-scale demolition and construction.  I hate to think about where the massive heaps of refuse go. There tends to be far too much waste, and not enough re-use or up-cycling. The EPA reported that 38 Illinois landfills, in 2015, took in more than 44 million gate cubic yards of waste. Five of those landfills took in non-recycled or re-used waste from the Chicago area.

Along with the tons of waste headed to the overflowing landfills, we are losing some of our history, heritage, and culture. Two Chicago destinations deserve a gold star for preserving some of the past while facing present-day needs.

So That’s Why They Call it Navy Pier

Long before the phrases, re-use, recycle, and re-hab, Navy Pier was like a cat with nine lives. Morphing from one to another to fit the times.

It’s not about Old Navy. Or Pier One. Navy Pier, first opened in July of 1916, as the world’s longest pier. Just north of downtown Chicago, it stretches into Lake Michigan for about six city blocks.

During WWI, it was used as a prison. My father, a WWII bomber pilot, recalled the war years when it was used as an arsenal and training grounds for the Navy.  During my youth, one of the universities filled it with classrooms. As a young teen, I recall the open space was home to music festivals. I saw Jose Feliciano perform there, fairly up-close-and-personal.

\The Pier was re-fabbed and re-opened in 1995 as a multi-use center. In those days, my daughter, sister, nephew, and I rented bikes and rode up and down the lakeshore paths encircling weaving around Navy Pier. A few years later, I attended one of my annual conventions there. Surrounded by Lake Michigan on three sides, it was my favorite of all venues. Very un-conventional.

Over the last 30 years, there has been nonstop development surrounding the Pier. Just west and north are new hotels, quality restaurants, Whole Foods, a children’s museum, and plenty of high-end condos. Just south and west are more multi-use large complexes and a nice smattering of green space.

One hundred years after it initially was open, Navy Pier is one of the premier tourist attractions in the Midwest. More than 9 million people head to Navy Pier each year.

If you’re staying downtown or on Miracle Mile, take a taxi, bus, or rent a bike to get to Navy Pier. Parking is expensive, and the short distance isn’t worth the traffic and parking hassles. Allow plenty of time to linger and explore.

The 606 is not an area code.  The 606 is named for the first three digits of all Chicago zip codes. About the same time that the original Navy Pier was unveiled, an elevated railroad crossed through the city’s near-west side. For the last 20 years, it stood dormant. Now, it’s an oasis-like elevated bike/hike path.

The 606 opened in June of 2015, after ten years of development. In the first year, it won awards including the Metropolitan Planning Council’s Daniel Burnham Award for Excellence in Planning, Chicago Magazine’s Best New Public Art, and the American Planning Association’s National Planning Excellence Award for Urban Design.

Amid the ruins of the train tracks and the nearby factories that fed the rail system, are 200 species of plants, a few art installations, and several illuminated bridges. Parks and community centers spot the trail on the street level.  Being on The 606 offers a great vantage spot to catch some of the city’s colorful murals, or a peek through the gentrification stages in Humboldt Park, Logan Square, and Wicker Park.

The elevated trail runs 2.7 miles, east to west, along the abandoned railroad line from Ashland (1800) on the east to Ridgeway on the west (3750). It’s not in the touristy areas, but it’s easy to get to via public transportation. If you’re driving, there’s plenty of street parking. No matter how you get to the 606, it’s worth the effort for a peaceful way to get a glimpse of the real Windy City, move your body, and breathe in the fresh air.

There are a few bike rentals located within walking distance from the 606, for those who prefer to ride here, and all entry points are biker friendly. For joggers, there are blue side lanes similar to yoga mats, where bones will be better protected from the hard concrete.

The trail is open from 5 a.m. to 11 p.m. and has multiple entrance points, lighting, security cameras, water fountains, benches, recycle bins, bike racks, and even a bike repair station along the way.   The trail is clearly marked, in both directions, so that walkers, joggers, bikers, or rollerbladers can keep track of how far they’re going.

There are future plans for more art and landscaping and green space within and surrounding The 606.

The 606 is Chicago’s innovative park and trail system featuring an elevated Bloomingdale Trail, as well as four connected, ground-level neighborhood parks, the Exelon Observatory, public art installations, educational programming, and other amenities. Serving more than 80,000 residents and visitors from throughout Chicago and beyond, it’s a bike-friendly, family-friendly, community-friendly above-ground oasis. For more information, visit The606.org.