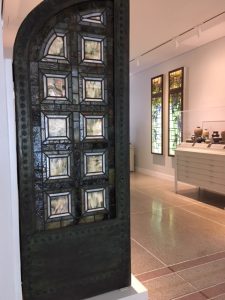 Central Florida is best known for its theme parks, not its art museums. Yet, the Metropolitan Museum of Art’s curator of decorative arts claims the Charles Hosmer Morse Museum of American Art in Winter Park has “the most comprehensive and the most interesting collection of Tiffany, anywhere.”

Disney may have Mickey and Minnie, but Morse has Tiffany. We’re talking tiffany glass, not silver.

The Tiffany Glass and Decorating Company was established in 1892 and later was known as Tiffany Studios. While the fine jewelry and glass may seem light years apart, there’s a close connection.

Charles Lewis Tiffany opened a dry goods store in New York City when he was just 25 years old. He added a silver studio and that business grew to the prestigious Tiffany & Co.

Louis Comfort Tiffany was the son of Charles. A world traveler, Louis became a leader in art nouveau. He was commissioned by both Mark Twain and The White House. When his father died, he became the art director for Tiffany & Co. and was responsible for creating their art jewelry department. Whereas his father’s jewelry was primarily made from precious stones, Louis elaborated jewelry with semi-precious gems and enamel.

Although glassmaking had been practiced for 5,000 years. Louis brought the technique to commercial success with the advent of electricity. He was a purist when it came to glass. He used blown and leaded glass and metals to envelope the new electric lights within pieces of colorful art.

As he progressed in his designs, he began to build his own masterpiece home called Laurelton Hall. The mansion was a 37,000 square foot estate set on 580 acres in Long Island. The dining room, alone, was 1800 square feet and could accommodate 150 guests. The reception hall was a music room shaped like a rotunda. Most impressive, was the chapel, a later addition to his estate.

Louis designed a Tiffany glass Byzantine-Romanesque chapel interior for the Chicago World’s Fair in 1893, which propelled his stature as an artist. According to the Morse Museum, “A tour de force of design and a virtuoso performance in the arts of mosaic and glass, the chapel was a sensation and brought the already successful designer to even greater heights of popularity both in America and abroad.”

The Chapel’s electric light was a ten-foot by eight-foot emerald green cut glass chandelier hanging from the middle of the room. The Chapel’s altar rivaled that of European cathedrals. It featured several world-class stained glass windows depicting religious scenes. More than 10,000 pieces of cut glass adorned just one of the stained glass pieces of art.

The exhibit at the Morse shows the stages of production that led up to the Tiffany Chapel, including studies, oil on wood, then, leaded glass. Complementing the mosaic glasswork is mosaic stonework at the altar. Latin verses are tucked in the arch, retablos, and steps.

After the world’s fair, the chapel was installed in St. John the Divine Cathedral in New York City where it fell into disrepair. In 1916, the chapel was restored and relocated to Laurelton Hall. However, in 1959, a fire ravaged Laurelton Hall for several days. While the most precious remains of the estate were salvaged, for almost 40 years, the elaborate and exquisite chapel was stored in packing crates.

According to Hugh E. McKean, a former artist in residence at Laurelton, “The chapel was his (Louis’) favorite among all his works, not least because it was a trial run, a proving ground for nearly everything he made later.”

McKean, a graduate of Rollins College in Winter Park, Florida, served as president of the college from 1951-1969. His wife, Jeannette, was the granddaughter of a Winter Park philanthropist, Charles Hosmer Morse. She founded the museum in 1942, and the couple ultimately bought the valuable remains of Laurelton, including the chapel, and bequeathed them to the Morse.

The Morse acquisition of the Tiffany Chapel in 1999 marked the first time in more than 100 years that one of Tiffany’s most important interiors was open to the public. It took three years for the chapel to be carefully shipped and rebuilt in the Florida museum. Today, visitors can experience the chapel in daylight and at dusk, thanks to intermittent timers.

Louis loved light and all forms of nature. His glasswork reflects that, as does his home. When you stroll through the Morse, you feel a very different sensation when you get to what was Daffodil Terrace at Laurelton Hall. It does not appear to be a museum, but rather, a welcome respite from city life, or stress. Tiffany must have been a perfectionist, as some of the wood around the skylight was shipped from North Africa and the decoration includes more than 100 molded tiles.

The lovely terrace, that is symbiotic with the lush green Central Florida landscaping, was built by Louis to be “a graceful transition from inside to outside, integrating the interior of the house with the outdoors and forming a splendid platform for observation and experience of the landscape,” according to the Morse Museum Guide.

That he was influenced by Frank Lloyd Wright is evidenced here in the inside/outside feel. He was seeking a utopian experience in his architectural designs. Although the lives of Emerson and Theroux straddled that of Louis, those marks are also evident at Daffodil Terrace and in his works with glass, ceramics, painting, and architecture.

Among his lifelong themes were 1) the beauty of nature, 2) a love of Eastern aesthetics and 3) humble materials.

All these, and more, are on display at the Morse, Tuesday through Sunday at the Morse Museum in downtown Winter Park, Florida. A cell phone audio tour makes the visits even more interesting and complete. Remarks from Hugh McKean and others are included throughout the audio tour.