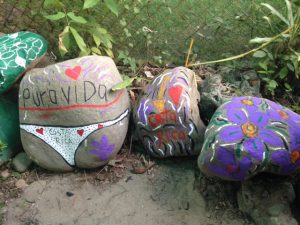 In Costa Rica, “pura vida” is an expression not unlike aloha or shalom. They use it for hello, or goodbye, or to infer, “keep cool.” The literal translation is Pure Life, but to the many ex-pats who have embraced the “pura vida” it can also mean appreciating the simple things in life

There are plenty of people drawn to the pura vida after living in North American high rises, driving BMWs, and working in air-tight conference rooms. Here in Costa Rica, people seem to hang low and enjoy the simple life. They soak up the sun, sunrises and sunsets, the surf and sounds of crashing waves, fresh fruit, and fish. Maybe just as importantly, they can chat with friends, family, and neighbors without worrying about missing a bus, train, or conference call.

Pura vida seems to be what many are searching for, especially after they’ve reached a certain age and have shuffled their priorities.

Costa Rica has one of the lowest unemployment rates in Latin America. It also has one of the highest literacy rates, and since 1948 the country has had no military forces.   The country depends significantly on the tourism industry.

While most northerners come to check out the volcanos or the beaches during a one-week vacation, there are plenty of snowbirds, part-timers, and those who have permanently moved their suitcases south. The influx of English-speaking residents also contributes to the ease for North American travelers to experience the pura vida.

Brett was a harried ad exec in Houston, not unlike the crazy role played by Darrin in Bewitched, or Don Draper in the more recent Mad Men. One day he approached the owner of the company and said, “I’ve got a passion I have to pursue.  Surfing. I’m moving to Costa Rica.”  Today, he gives surf lessons and trains all the lifeguards in a small beach town.

After Janet’s two daughters were grown, she left the States and settled on the Pacific Coast. Both her girls coordinated destination weddings in Costa Rica and enjoy periodic visits with their young families to see mom on the beach.  With too much energy to retire, Janet works as an interior designer in her adopted hometown.  Most of her clients are Northerners.

Denise brought her two young sons to Costa Rica more than 20 years ago, and now owns the only store in a seaside village. Beyond the traditional Costa Rican fare like plantains and beans, she also carries ketchup, mayonnaise, peanut butter, and jelly — and Captain Morgan — to cater to the ex-pat tastes. On her Facebook page, North Americans ask in English, “Do you sell soy milk? Umbrellas? Haagen-Dazs ice cream?”

Another American business owner in Costa Rica moved here two decades ago, in part, because as a Type 1 diabetic she was seeking quality low-cost health care.  What started as two guest rooms for rent has turned into a complex of more than 30 rooms with three swimming pools and a library that doubles as a conference room for English-speaking get-togethers and round tables.

Rosemary worked for decades in Texas and California schools. She had family in San Jose but chose to retire to a slow-paced beach town where the cost of living was more affordable. Today, she’s Mayor Rosemary, making decisions to improve the lives of a few thousand Costa Rican and North American residents. She doesn’t hesitate to approach the many weekend visitors to tell them to pick up their trash and refrain from burning any live brush in their beachside campfires.

Beyond the Don Drapers and Darrin Stevens types, other ex-pats are reincarnating Mr. Douglas in the 1960s Green Acres sitcom. In the TV show’s jingle, actor Eddie Albert shouted out to Lisa, (Eva Gabor), “Keep Manhattan just give me that countryside” as he picked up his farm tools.  The opening tune ends, “You are my wife. Goodbye, city life. Green Acres, we are there.” Many do just that. They sell their homes and many of their belongings in the States to get closer to nature.

Travis and Alexander recently spent three months working on a permaculture land cooperative owned by Americans. They learned about sustainable building, organic farming, harvesting, and holistic living. After their stint, they were headed back to the U.S. to earn enough money with the intent to return back to “farm living.”

Although these two strong and fit Floridians were working long hours in the hot sun, without pay, they felt a great sense of accomplishment. They saw the fruits of their labor and recognized that they were contributing to a communal enterprise in a sustainable environment.

For those interested in staying longer than a traditional week vacation, the opportunities to taste the pura vida are endless.

Note: Costa Rica has a number of programs that are popular with younger wanderlusts. World Wide Opportunities on Organic Farms (www.wwoof.org and www.wwoofinternational.org) is a great way for people to test out living in different countries. The work volunteers can learn about sustainable living, while getting a taste of the different countrysides. In Costa Rica, WWOOF is an “information service linking travelers with organic farms which promote sustainable farming by hosting travelers for free.”