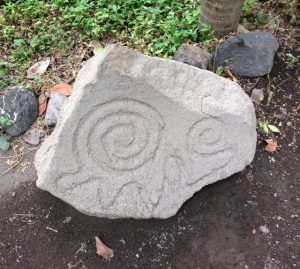 Just about 30 minutes after crossing the border from Costa Rica into Nicaragua, I am in awe. Visions of two volcano peaks.

Ometepe is an indigenous word that means twin peaks. Ometepe is a very large island in the middle of a huge lake. The island is flanked by what were once two same-sized volcanos. Now, the active one is larger (Concepcion) than its inactive twin (Maderas).  Both volcanos are ripe for hiking, but you need to allocate an entire day to each and be prepared for a good workout.

Ometepe is like paradise. There’s no environmental pollution. Pretty much the entire island is an oasis. It’s filled with eco-travel, is removed from the hustle and bustle. Its tap water is considered the best in the country.

There are many things to do here, even if you are not a volcano trekker. Some people stay for a weekend. Others stay for months

Getting here is part of the fun. There are ferries and boats that cross frequently from San Jorge, just 10 minutes beyond Rivas, or about an hour and a half from Granada. Following are just a few ideas.

El Ceibo is a two-in-one museum that also has accommodations, a restaurant, and horseback riding.  Opened in 2008 on a converted tobacco and cotton farm, the property and its surroundings are lush, tranquil, and historical.

The owner of El Ceibo was only 12 when he thought about a museum to showcase his collection of Nicaraguan coins and paper bills. Today, it’s the only Nicaraguan numismatic display outside of the Banco Central in Managua. What makes this place special is that Nicaragua’s currency is dynamic.

Nicaragua was the first independent country in Central America (1821), yet it was the last to produce its own currency (1878). Now, each president designs a series of paper bills. Some have braille. Others have security-enhanced watermarks or color-changing threads. Images change throughout.

While in the States, we’ve always had pretty much the same five greenbacks, in Nicaragua, currency values have fluctuated significantly, requiring different denominations. Under Violeta Chamorro, for a time, the Nicaraguan cordoba floated with the dollar. One year prior to her taking power, one million cordobas couldn’t buy you a soda. Today, 20 cordobas can buy you a meal, if you’re thrifty.

Checking out the bills, and their creators, you also get an idea of the number of families with the repeated rule since 1821. Somoza. Sacasa. Lacayo. Chamorro. Ortega. The names repeat throughout history.

The second museum at El Ceibo is of pre-Columbian artifacts. The first currency here was the cacao bean. Still today, coffee and chocolate are big here. But, corn and the tortilla is another staple. El Ceibo showcases a metate used to grind corn for tortillas dating back to 3,000 BCE.

The displays talk about Nicaragua’s indigenous roots. Nahuatls (which inhabited much of Mexico), along with the Chorotegas, lived as far southwest as Ometepe. Since Ometepe is a remote island, many of the traditions of the natives continued well after the arrival of the Spaniards. Thus, Ometepe was a sanctuary for traditions.

Passing through the rooms, one sees samples from the different cultures and history.

Some pieces date back to the Orosí period, 3-5,000 years BCE. These ceramic samples were sun-dried.

The Tempisque period ran 400 BCE. Black and red predominate, the latter of which was made with annatto seeds.

Leon Punteado era was 300-800 AC. These tended to be tripod-based with red or brown coloring.

Witness to the medical practices dating back are obsidian scalpels.

A remnant of the active volcano is a perfectly intact incense burner found in a lava avalanche.

The tomb of a shaman shows how he was buried with jade and gold to represent his special status. The jade was “imported” from what is today Guatemala, and the gold was brought here from Colombia.

Several funeral urns on display contained the belongings of the deceased. The natives believed in reincarnation. Their customs allowed for two burials. One was for the recently departed’s body, wrapped in leaves. Later, once dried and partially decomposed, the bones were buried along with the urns, containing their precious belongings.

El Ceibo has numerous petroglyphs on the property. While there’s a dedicated petroglyph museum farther east on the island, El Ceibo is like a one-stop shop to see it all.

Many of the glyphs at El Ceibo have serpentine engravings.  The spirals represent the umbilical cord — life. Some carvings are on volcanic rock. However, around 300-500 AC, river stones were used for petroglyphs.

$8.00 buys admission to both museums with excellent guides, in English or Spanish.  Cabins that sleep up to four people can be booked for about $60 a night, including breakfast and museums.

El Ceibo is a bit more than a kilometer from the highway. You can take a bus to the entrance at the highway, hire a taxi, or rent a motorcycle.

After filling your head with knowledge, head just about ten minutes east to Charco Verde. Like El Ceibo, there are accommodations here, a restaurant, and plenty of things to do.

There’s a mariposario (butterfly garden) where you can see all kinds of butterflies amidst a lush screened-in environment.

Just past the mariposario are hiking trails. Some are flat and accessible via bikes. Others, steep. All are beautiful, and you can chill here, or take a path to a tranquil beach on the property. There are also several look-out points, to view the volcanos.

Admission is $5.00 for both mariposario and trails.

Hotel rooms are a bit more than those at El Ceibo. The hotel beach access, restaurant, kids’ playground, and kayak rentals are open to all.

Take a taxi, hitchhike, rent a motorcycle, or walk from the highway here.  It’s 12 kilometers from the main port town of Moyogalpa, and 1 kilometer from the smaller port, San Jose del Sur. There are about a dozen ferries that cross from San Jorge (Rivas) to Moyogalpa, daily. Four smaller boats head to San Jose.