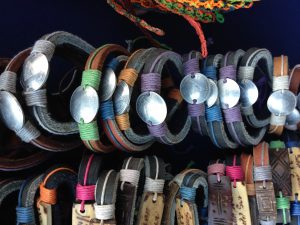 If you consider the household income, Nicaragua is the second “poorest” country in the western hemisphere.  But, there’s a wealth of creativity and resourcefulness infused in everyone’s daily lives.

“This is real life,” says Muffadal Saylawala, an American who now considers Nicaragua his home. “At the core, we are all creative and resourceful beings. But here, it’s everywhere.”

In part, recycling or being resourceful is more natural in lower-income societies. With less disposable income, there’s less waste. And, it’s more natural to retool or repurpose items for practical or decorative usage.

Evan is in Nicaragua to soak up the surfer and yoga lifestyle. He notices how creative the Nicaraguans are when it comes to transporting goods on motorcycles. Huge bulky items may be carefully balanced between several people riding on one traditional-sized bike.

Resourcefulness with vehicles was something that caught the attention of Steve, an Australian in San Juan del Sur, Nicaragua. Of course, there are the re-fabricated tuk-tuks, carts, kiosks, buses, and flatbed truck people-movers.

But Steve is impressed by a nifty surfboard rack he saw on the side of a motorbike. It was an old fold-down seat with straps holding the board down. He assumes the owner either couldn’t afford or didn’t want to buy, a surfboard rack.

“You have to be creative around recycling and re-purposing. The genre around up-cycling is the creative mind, and you don’t see waste. You’re seeing something else.”

Surfboards are a favorite people-mover for many here.  Once they’ve finished their purpose of riding the waves, the long colorful fiberglass sheets tend to resurface as billboards. Given that San Juan del Sur is a haven for surfers, it’s fitting that signs written on old surfboards are everywhere. Menu signs. Hotel signs. Price sheets. Even Alamo Rental Car’s hanging retail sign is painted on a surfboard.

Muffadal owns a large hostel in San Juan with a surfboard repurposed sign that says Casa Oro. Later, he acquired two smaller guest homes, Casa Andalucía and Nuestra Casa. All are decorated using reclaimed wooden pallets, driftwood, and glass bottles. For him, it’s not about saving money, rather saving the environment. And, his properties reflect creativity and respect for our planet.

“In a tourist town like San Juan del Sur, up-cycling can definitely help spread awareness,” says Jacinta, Steve’s partner. The pastry chef from Australia says, “If the business is doing well, it can educate people.” Jacinta and Steve are in Nicaragua as part of a two-year trek through the Americas. In San Juan, they noticed the repurposed items add a special feel.

“I’m an electrician,” explains Steve. He says that repurposed light fixtures can create mood and lighting. “Using bottles is a cool idea to create a funky space. I see it more as going for a style than necessarily up-cycling.” Referring to bottles and driftwood candelabras he says, they serve as good diffusers, to make the light softer. “Bottles are better than a brick wall by allowing natural light to infiltrate while providing privacy.”

Walls and bars in Muffadal’s places made out of bottles provide an ambiance with lighting and style. Additionally, wine bottles or driftwood hang from the ceiling with strategically placed light bulbs inside to throw off a warmer glow and draw attention to the reclaimed elements.  Adding to Casa Oro’s eclectic feel are its coffee bar made out of bottles, and a wine/beer/spirits bar constructed out of pallets. For the latter, lighting seeps through the slats, giving the bar a recessed lighting feel.

“A lot of people are closed-minded. They just see a bottle and throw it out,” says Steve. “With repurposing, you think more outside of the square. A wine bottle isn’t just a wine bottle. In some parts of Asia, they fill it with gasoline and sell it on the side of the roads.”

Jacinta appreciates efforts to be eco-friendly. Rather than a bottle getting crushed, she feels good when she knows it’s being recycled. “I’m a lot more conscious of things that can be recycled. You do notice when they have a use for it.”

Simon Says is a juice bar and cafe a block down from Casa Oro. The indoor garden is filled with reclaimed objects for planters. Outside, plants sit in black plastic bags with funky white paint decorating them, to make striking accents against the black and white front doors.

“We take notice in up-cycling and repurposing,” adds Steve. “In the lower socio-economic areas, it’s more important to up-cycle and do more. Because to just throw something away is a waste.”

Steve respects part of the creativity in the Nicaraguans is their ability to make and sell something from what might not be considered much.

Hannah has been in San Juan del Sur for about nine months. From New Hampshire, one of the things that she likes about the culture here is how trash is recycled into art.

Some jewelry is made out of what could easily have been headed to an incinerator, landfill, or garbage dump.  Earrings and bracelets are crafted out of old coins no longer in circulation. Polished coconut husks make for interesting backdrops for pendants and earrings too. Others are made from tortoise shells, seashells or wood.

Bertha has a degree in economics from the university in Managua. She combines her business knowledge with her sense of style and do-it-yourself design that she learned from her mother. She launched Metamorphosis Nica two years ago. Transforming waste products, namely the ring top tabs from soda cans into utilitarian fashionable items, her goals are twofold. She wants to give work opportunities to less employable single moms while building awareness and preference for eco-friendly options.

Metamorphosis Nica’s cottage factory is within the Mansion del Chocolate hotel in Granada. Creating fashionable accessories from junk isn’t quick. It can take several days to a week to complete a purse.

She has multiple lines of utilitarian recycled products. The classic is metal ring top tabs woven together with nylon thread into modern but functional purses, backpacks, and belts. Another collection inserts leather pieces. The third is her ethnic line. It incorporates huipiles from Guatemala, beads, and other items commonly used by indigenous societies. Bertha likes to resuscitate traditional apparel after the pieces are no longer being worn. The soda top tabs are like rice, she explains. They go well with everything.

Propelled by a constant desire to be more creative and make use out of waste products, Bertha introduced seasonal lines. The Blue Collection uses blue thread and blue accents to create awareness for autism. She gets a sense of fulfillment because people appreciate her contributions. And the circle continues with each sale. “It’s a great satisfaction when the buyer becomes part of the metamorphosis.” Her creations are now on sale at the Museo de Chocolate stores in Guatemala, Colombia, and the Managua airport, among other shops.

Bertha is a fan of creativity, new ideas, and innovation. “Nicaragua is a poor country. But poverty does not mean poor. We are people that create.”