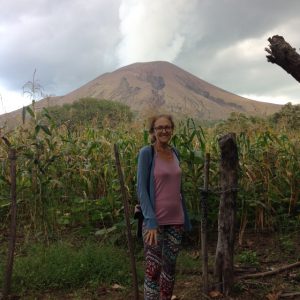 The Nicaraguan flag gives you an idea of the beauty of the country. First, there are two broad blue stripes that represent how this rather small country is bordered by the Pacific and the Caribbean. Inside a circle that says, Nicaragua, Central America, is a triangle with several images. A rainbow means freedom, and the sun’s rays illustrate hope.  Finally, there are five volcanoes that symbolize the five Central American countries.

In reality, Nicaragua has many volcanos — 19 to be exact.

The island of Ometepe is a favorite place for volcano-lovers. It is graced with two twin volcanos, each of which can consume your entire day of trekking. Not far from Ometepe is Granada, a popular place for visitors and ex-pats. There are several volcanos in this region.

Heading a bit farther west is the city of León. The seat of the revolution, and a university town,  it sits not far from five incredibly beautiful volcanos. While the history of León is reason enough for a visit, the volcanos are breathtaking and give one a great respite from the heaviness that you may feel re-living the Somoza regimes and the bloodshed from the revolution.

The volcanos surrounding León are spectacular. Furthermore, there are terrific adventure tours to the volcanos.  We’re not just talking about hikes or bikes. But volcano boarding, and moonlight tours where you are close enough to smell or watch what spews out of these active volcanos.

Let’s be real. Most visitors to Nicaragua seem to be millennials. Especially those that want volcano adventures. The brochures for volcano boarding verge on extreme sports. However, unless you suffer from vertigo, have uncontrolled high blood pressure or have physical limitations, this is worth considering going beyond your comfort zone.

The volcanos near León are reasons for making exceptions. For a very affordable price, you can have the time of your life. Get close to nature, and out of your comfort zone, at the same time. Rev up your adrenaline.  Climb to the peak of a mountain, and then, gaze into a crater to see a fire burning. Or, don a space-man-like brightly colored suit, mittens, and mask, and sit on a homemade sled and speed down an ash-covered volcano.

Everything about these volcano experiences is extraordinary. Of course, you can make your way on your own, but everywhere you look, there are tour companies that will make it more enjoyable, and safer.

Giving it a Go

I book my tours through my hostel, Posada la Gordita, to get an extra discount. The guides are all nice, helpful, and cool guys.

First on my checklist is El Cerro Negro  where my guide must feel a bit of my uneasiness. El Cerro Negro is the place to go and slide down, on your bum, or if you want to look like the rack brochures, on both feet, surfboard style.  My guide tells me that he’s led people of all ages on this adventure. Little kids, and senior citizens. Surely, since I’m healthy and fit, I tell myself, I can make it. As I follow him up the trail, I avoid looking down. Keeping my eye on the prize, the peak gets closer and closer.

Cerro Negro is an active volcano. The ash is what makes it great to slide down it. It’s like snowboarding.  The guides teach you, however briefly, how to maneuver the sled. How to go left, or right, and how to go slower or faster. I was ready to go at the slowest speed possible.  The slope looked far too scary for me. In reality, once I sat down on my flat sleigh, and gave myself the tiniest little push, it didn’t speed down the mountaintop. After I took a few breaths, I shifted my weight to get a bit more speed. All in all, it was a riot. Well worth the leap. The views alone are worth the climb. But, it’s the slide down the black ash that’s exhilarating and a hoot.

Back when Cerro Negro erupted in August 14, 1946, it destroyed the city of Leon.  So now, that day is considered the day of pena (grief). Then, one day in December, the Vírgen de la Concepción de María was carried through the street as part of a procession. Miraculously, the volcano went dormant. So, December 7 is now a day of joy to commemorate the powers of the virgin. Taking an excursion here should rid you of any personal grief, at least temporarily as your adrenaline is on high gear.

Next on my agenda is Telica. This is one of the most active volcanos around. Reported eruptions date back as far as the 1520s. It’s perched about 3,500 feet above sea level. I’m told this isn’t too hard a mountain to climb. In fact, we go about halfway up in an all-terrain vehicle. Then we criss-cross up, on foot.

If my timing had been better, I would have done this trip on a full moon. I pick the sunset trip, and there’s nice moonlight to cast beautiful glows. It was an awe-inspiring experience and nice contrast to Cerro Negro.

With the help of our night lights, it wasn’t all too hard to climb up the trails. The scene at the top was unsurpassed. We got lucky. There was a great deal of lava boiling up from inside the crater. Through the heavy smoke, we could catch glimpses of the flames.

My group was so enthralled with that experience, that we overstayed our time at the peak. So it was a bit late for the bat-watching. Nonetheless, my fellow hikers crawled into some caves to look for bats. I chose to stay above ground. For what seemed like a long ten minutes, I feared that I’d never see them again, and I’d be stranded on the mountaintop. Of course, their headlights popped up in the near distance, and we reunited. We had an easy hike down, and after we drove back to the city, our guide picked us up some traditional Nicaraguan dinners. All in all, it was an experience I highly recommend.

Perhaps Momotombo is the closest volcano to the city of Leon. It’s also the name of chocolate bars, so easy for me to remember. Momotombo is another highly active volcano. In 1625 it destroyed Leon. The town was rebuilt farther away, to protect it from the lava and ash.

For the last 100 years, it was dormant. Then, in 2015, it spurted back into full gear. Now in a relatively calm state, Momotombo quietly spews sulfur dioxide. Nothing too serious, although it’s not usually on the tourist trail, now.

El Hoyo and Momotombito are others in the Leon vicinity. Additionally, San Cristóbal is the highest active volcano in the country. Tours are possible from Leon. However, it is considered a difficult climb, and gas is constantly being emitted.