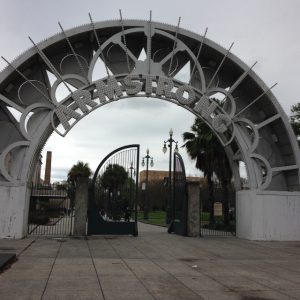 “Take note of the past,” says actor Tom Hanks, who was executive producer and narrator of a 45-minute 4-D movie that runs exclusively at the National World War II Museum in New Orleans.

The museum opened ten years ago, on the anniversary of D-Day. The venue? A restored German brewery on Magazine Street in NOLA’s Warehouse District.

It may surprise tourists that New Orleans is home to the nation’s greatest collection of WWII memorabilia. One of the reasons why this city houses a world-class museum from this era is because 96 percent of the American WWII vessels were built along this coastline by Higgins Industries.

The site has grown significantly since the original architects created blueprints. It was designed to be a $28-million-dollar museum, with a library of oral histories that were collected by Stephen Ambrose, the museum’s founder. Today, the ever-growing national WWII memorial and archives represent about $400 million in investments.

Ambrose, author of the best-seller, “Band of Brothers,” “D-Day” and “Citizen Soldiers,” had an affinity for the bayou area. He was a professor at the University of New Orleans where he established the Eisenhower Center for American Studies. During his tenure there, he conducted hundreds of interviews with Dwight D. Eisenhower, for multiple biographical tomes.

William M. Detweiler, J.D., who currently sits on the board of the museum, shared big dreams with Ambrose.  He wanted a museum for his beloved New Orleans,  along the lines of the National Air & Space Museum in Washington, D.C. He has continued to march in Ambrose’s footsteps to make this the greatest museum of its kind.

“This is America’s museum. This is not a bullet and guns museum,” says Detweiler. “In March of this year (2016), 70,000 people came through, and a good portion were students. The whole idea is to tell the story of the men and women in WWII. What it means today, and for future generations. This museum has been my passion.”

Andrew Higgins, apparently, had a similar passion for his floating warcraft. According to museum archives, “New Orleans was home to Higgins Industries, a small boat company owned by the flamboyant entrepreneur Andrew Jackson Higgins. Higgins designed and produced a unique and ingenious collection of amphibious boats capable of delivering masses of men and equipment safely and efficiently from ship to shore, eliminating the need for established harbors. In 1938, he operated a single boatyard employing less than 75 workers. By late 1943, his seven plants employed more than 25,000 workers.”

Higgins may have been a radical businessman back in those days. In addition to his business smarts, he understood the need for equality in the workplace.  Higgins Industries broke the color barrier in New Orleans by employing people regardless of race. Whites, Blacks, men, women, seniors, and people with disabilities were paid equal wages. Production skyrocketed. Higgins Industries built more than 20,000 boats by the end of the war.

“Hitler had a term for Higgins,” says Dettweiler. “The American Noah. The boats that won the war for us were built in New Orleans.   The boat builders were great people.”

To pay tribute to the boat builders, the John E. Kushner Restoration Pavilion at the museum gives you a glimpse of how PT (patrol torpedo) boats were made.  PT-305 is the only one that remains from WWII that is in good condition. A dedicated corps of 200 volunteers spent countless hours on its restoration. The PT-305 is getting ready for re-launch in Lake Pontchartrain, 70 years after its original sea trials on the same body of water.

As Detweiler addresses a WWII bomber squadron reunion at the museum, he tells the story of how they acquired the C47 hanging from the ceiling above him. It wasn’t from a benefactor. It wasn’t from a government white elephant sale or the army’s parking lot. It was from e-Bay. Based on its serial number, one of the museum’s curators verified this C47 flew paratroopers into Normandy, Holland, and the Battle of the Bulge.

The museum is open daily, from 9 a.m. to 5 p.m. Advance tickets are recommended for Hank’s film, “Beyond All Boundaries.” What Hanks calls “authentic, powerful and inspiring,” features narration by Gary Sinise, Kevin Bacon, Tobey Maguire, Elijah Wood, John Goodman, Blythe Danner, and Brad Pitt.  The movie, shown every hour, is one of the highlights for museum visitors. It’s projected on a panoramic screen, with sights and sounds that are meant to touch all your senses.