My Heaven on Earth Getaway 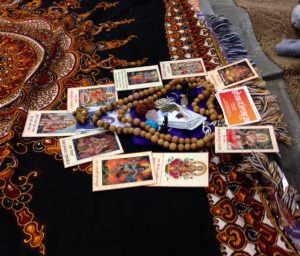 I love living out of a suitcase, duffle bag or backpack. I’ve racked up beaucoup miles on three airlines.

Beyond being a road warrior at work, I used to take one “deep dive” a year. Israel  and Turkey. Poland and Czech Republic.  India.  Peru.

I love exploring. I love different cultures and different languages. So, the next deep dive for this Chicagoan is … (drum rolls, please) … (now for the unveil) …

Madison, Wisconsin was my world traveler’s choice this year. Not because I can’t take the time for a “real” getaway. Not because I’m watching the pennies. But because my heart feels nowhere better than when I’m at Bhakti Fest.  For the last three years, I discovered that Bhakti Fest was the most important vacation that I could take.

It didn’t matter that I pretty much spent five months last summer traipsing all over Mexico and the U.S., for work and play. The only spot that really hit the spot was Bhakti Fest. A vacation should be a respite. Transformative.  Energizing. For most, it’s a challenge to disconnect from our non-stop working and worrying mode. At Bhakti, something special happens. Not just to me, but to pretty much everyone that attends.

No wonder the return rate of Bhakti-goers is greater than 90 percent. Once you go, you gotta go Bhak.

As a yogi and a music lover, Bhakti Fest is my heaven on earth. The smorgasbord of non-stop kirtan (devotional music), yoga infused with live music, and workshops on breath work, astrology, sound healing, and Vedic studies are like a battery recharge for me. For optimum operation, complete immersion is required yearly.

Musicians from all across the country provide a wide range of Kirtan, from the traditional, to hip hop, to Bluegrass. The stage is on fire June 26-28, from 10 a.m. to 1 a.m.  Yoga workshops, with celebri-yogis span twelve hours a day, June 26-28, with workshops 9 a.m. to 7 p.m. all three days.  For those seeking even more, there are two pre-festival intensives on June 25 and a post-festival intensive on June 29.

Bhakti Fest celebrates the devotional path. It embraces ancient and modern sacred wisdom. The festival is a “vehicle for evolution of human consciousness through a heart-centered revolution.”

Sridhar Silberfein is the founder/producer of Bhakti Fest. Back in the Woodstock days, Silberfein was the man responsible for bringing Swami Satchidananda from the Integral Yoga Institute to 500,000 people.  40 years later, Silberfein’s dream of meshing the spiritual with the musical came to reality at Bhakti Fest in Joshua Tree, California.   A few years later, he ventured beyond the high deserts and brought Bhakti to Madison.

“I envisioned Bhakti Fest to be all over the country and we started going cross country in 2012,” says Silberfein. “So many areas are just so open for what we bring. Attendees know that when they come to Bhakti Fest they are coming to a safe environment, with no alcohol, no drugs, and vegetarian food. Many families are coming with their kids, we take really good care of everybody. We put on a wonderful show.”

My first three Bhaktis were in Joshua Tree, about 30 minutes north of Palm Springs. Now, I’m going for the green. As in grass, not bucks. Lakes, not deserts. Campus town vs. retreat center.  I’ll be joining an estimated 1,500 people of all ages at Madison’s Willow Island for a one-of-a-kind experience.

Silberstein selected Willow Island at the Alliant Center as the seat for Bhakti Midwest. It’s perfect for the scores of attendees who camp out in tents or RVs. For those preferring a roof over their head, the Clarion Suites is adjoining the festival grounds. The music and yoga stages are surrounded by picturesque ponds, plush green grass and limestone walkways. Large, elegant willow trees outlined by the Madison skyline craft a stunning backdrop and unmatched ambiance for the event.

Madison may be appropriate as the seat for Bhakti Midwest for many reasons.

Joanna C. is a Park City, Utah resident who has been to Madison about a dozen times. She calls it “the Berkeley of the Midwest,” and says it’s “cool like Austin.”

Kenn Goodman is a music producer and international touring musician. He says Madison has always been a great place for live music. “In the past, legendary clubs like O’Kayz Corral, Club de Wash, and Headliners always had crowds that welcomed out of town acts. It was a great combination of college students and locals that made it so fun. Any night of the week could be a party! Today it’s the still the great scene at clubs like the High Noon Saloon, who always books great touring bands.”

Steve B. from Chicago enjoys Madison. He was last there about eight months ago. “Madison has a lot to offer as the Capitol, and with the university, its lakes and its university feel,” he says. “It has a children’s museum, and it’s a short distance to the country: Spring Green, Devils Lake and the Wisconsin Dells. There’s something for everybody.”

1) The Visitors and Convention Bureau notes that 14 million visitors choose this city every year.

4) It was also cited among the Top 10 Happiest Cities in the World (National Geographic, January 2015).

While Bhakti Fest Midwest (Madison) continues to grow and become an important part of the yoga movement in the Midwest, it is not just for yogis. It’s a great destination for music lovers. The Healing Sanctuary offers massage therapists and healing arts practitioners. The festival is also great for those wanting to learn more about spirituality, or meditation. Speakers like Zat Baraka and Michael Brian Baker lead workshops that attendees say are transformational. Vendors sell a great variety of vegetarian organic food and beverages, and there are items from all over the world to buy.

“Attendees know that when they come to Bhakti Fest they are coming to a safe environment, with no alcohol, no drugs, and vegetarian food. We have a kids program. Many families are coming with their kids, we take really good care of everybody, we put on a wonderful show.”

“We are continuing to bring love, compassion, and happiness to everywhere we go, and bring more folks into their real true self,” adds Silberfein. “Many families are coming with their kids, we take really good care of everybody, we put on a wonderful show.”

Bhakti Fest will offer free admission for veterans and active military and children. Special reduced rates are available for seniors and local residents.  Admission packages range from the full festival, to one-day passes.

“Madison is a wonderful town for tourism,” acknowledges Silberfein. “In the summertime, there are many people there. We welcome all those people coming and visiting.  We are on the map for them to stop by.”

Visit http://midwest.bhaktifest.com to view the musical lineup, lecturers, and yoga instructors or to register online.