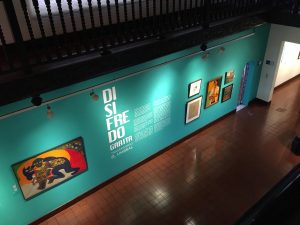 A great place to visit while in San José, Costa Rica is the MAC. The Museo de Arte Costarricense’s building and grounds are reason enough for a visit. But, there are always excellent traveling, temporary, and permanent exhibits worth viewing throughout the facility. Canto a México: Homenaje a Ernesto Cardenal and Disifredo Garita: Traspasando el Umbral are two brilliant shows on display until the end of June 2021.

Although the name of the museum infers it is a repository for Costa Rican art, and it is, displays at the MAC are not solely reserved for Costa Rican artists or themes. Canto a México is one example of the breadth and depth of work presented here.

Canto a México, which opened in March, is a visual serenade to Ernesto Cardenal (1925-2020). Cardenal (whose image appears in both prints on the left) was a Nicaraguan activist, Roman Catholic priest, and poet. After receiving his undergraduate degree in philosophy and literature from The National Autonomous University in Mexico City, he moved to New York City to pursue a Masters in Literary Arts at Columbia University. Additionally, he spent time in Kentucky with the well-known Trappist monk, Thomas Merton.

The highly respected renaissance man served as Nicaragua’s Minister of Culture for close to ten years. He received worldwide recognition for his literary accomplishments including the Queen Sofia Ibero-American Poetry Prize and the Peace Prize of the German Book Trade. Among the prolific author’s books was a collection of poems titled Canto a México (I Sing to Mexico) which gave name to the MAC exhibit.

Carlos-Blas Galindo is a Mexican visual artist, art critic, and professor who curated the collection. He selected 23 Mexican artists to create a homage to Cardenal’s life via linoleum prints, serigraphs, and xylographs. The images are diverse, post-colonial, de-colonial, post-Western, militant, yet unifying.

Many of the pieces on display are social commentaries that reflect Cardenal’s views about Nicaragua and the revolution, the Frente Sandinista de Liberacion Nacional (FSLN), and even the United States.

It’s worth asking the docents about Cardenal’s work, or read up on him before your visit.

A linoleum print of Marilyn Monroe (image above) may seem out of place ay a collection of Mexican art honoring a Nicaraguan poet. But Cardenal wrote a “Prayer for Marilyn Monroe” that blasted the world, “contaminated by sin and radioactivity,” that she chose to leave when she was just 36 years old.

Most of the etchings in the exhibit are printed entirely in black ink. A few have a touch of red or yellow. Each print is 8″ X 10″ within a thin neutral-colored frame.

To complement the simple but message-invoking black and white prints from the Mexican artists is an exhibit comprised of large bold-colored contemporary art. Some are as large as 40” X 60”. Traspasado el Umbral (Beyond the Threshold), is the largest showing of Disifredo Garita’s work, ever, in one place, according to one of the docents. Nearly 100 of Garita’s paintings are arranged in chronological order.

Most of the paintings are on loan from private collections, but a few of Garita’s works on exhibit are property of Costa Rica’s Central Bank museum. Two, are from the permanent collection of the Museo de Arte Costarricense. While the majority are oil on canvas, there are a few watercolors, tempera, pastel, graphite, oil on wood, collage, and mixed media.

Many of his images are of females who resemble flowers with long stalk-like necks and hair as decorative petals.

“Art is to be a witness of our time, and feel love and honesty with oneself” Garita once said. The Costa Rican self-taught artist and writer studied art restoration in Mexico City in 1968. That was the year of the massacre of university students at Tlatelolco. His time in Mexico changed his painting techniques, and as he once said, the messages relayed in an artist’s work often arise from the subconscious.

The Museo de Arte Costarricense, located at the eastern edge of La Sabana Metropolitan Park, is free of charge and open Tuesdays through Sundays from 9 a.m. to 4 p.m. Guided tours are available upon advance request.