More to Alajuela Than an Airport 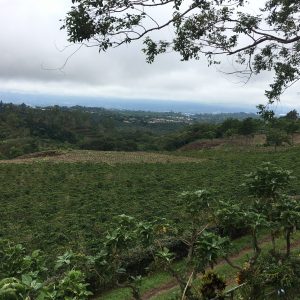 Why not spend a night or two in Alajuela, rather than the big congested city next door?

Alajuela is a fairly typical small Costa Rican town, with pretty much anything you need. There’s an assortment of smaller hotels and hostels, several parks, a traditional market, a shopping center, Walmart, and even a vegan restaurant.

Alajuela is much more conducive for a relaxing visit than San Jose. There are no traffic jams or constant jarring sounds of heavy vehicles on the roads. Plus, Alajuela is closer to some of the bigger attractions in Costa Rica.

While a nice half-day trip from San Jose may include a visit to Irazú and Cartago, Alajuela is close to the Poas volcano that sits in a cloud forest. The Poas national park will hopefully welcome visitors back later this month. Regardless, on the road to Poas, stop at a coffee plantation to savor one of the things for which this part of the world is famous.

Doka is a major coffee brand in Costa Rica. Britt is another. Most San Jose area hotels can coordinate tours to the Britt plantation. The Doka tour is far less commercial.

Doka is a ten-minute drive up spectacular hills from Alajuela city center. Along the way, there are lookout spots where you can see the four cities within the Central Valley: San Jose, Alajuela, Cartago, and Heredia. Once at the plantation, the view is also magnificent. Especially from the gift shop/cafe veranda.

Even better, after you sample the coffees, walk down a short path to be a hand’s touch away from the coffee plants. As your taste buds were awakened by the warm drink, your eyes will be wide open to take in the green row after row of crops, and colorful gardens speckled with blue and pink flowers.

Doka, for 80 years, has been owned by the Vargas family of Alajuela. One of their labels, Tres Generaciones, acknowledges the coffee business was passed down from one generation to the next.

While coffee has been linked to the history of Costa Rica, and Costa Rican coffee is among the finest in the world, we have to acknowledge it’s not a native crop. The coffee tree is believed to have first been cultivated in Ethiopia. From there, it spread to the Middle East (Arabica), and then to Europe. In 1502, Christopher Columbus landed in Costa Rica. Over the years, the Spaniards brought dairy cows and their love for café con leche to this part of the world.

In 1723, the French sent coffee across the Atlantic and began to harvest the beans on the island of Martinique. Later, coffee made its way to the mainland and Costa Rica. In 1821, Costa Rica won its independence from Spain. At that time, coffee was the mainstay product for exportation.  Long before the Panama Canal was forged, the trip across the Atlantic was very long. Coffee exports were shipped from Puntarenas on Costa Rica’s Pacific Coast, south around Tierra del Fuego, all the way north and east to London.

Today, Doka exports 80 percent of its beans to the U.S., Europe, and Asia. Only three percent is toasted, and sold, in Costa Rica. Decaf is sent to Germany where it undergoes a natural process to extract the caffeine. Then, the beans are returned to Costa Rica, while the caffeine is sold to companies that market and manufacture caffeinated beverages.

According to Ricardo, a private tour guide in Alajuela, Costa Rican coffee is the best for many reasons.

Believe it or not

*Ricardo Quesada is an Alajuela tour guide who speaks English, Spanish and Italian.