Live, Work, and Play, Away 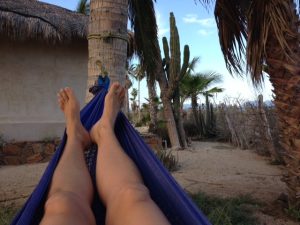 Live, Work, and Play, Away

What is the purpose of travel? Rest and relaxation? Pampering?  Shopping sprees or gambling binges? Adventure? For me, it’s mostly about absorbing other cultures.

When I was 16, I spent a summer in Mexico as part of a cultural exchange program. In the 80s, I coordinated my own study abroad in Mexico, South America, and the Caribbean. As a result, I earned a four-year degree, having spent only two years on my Big 10 campus. My love for independent learning never waned. For the last three years, I’ve been working and volunteering in Mexico and Central America for two to four months at a time.

At first, I thought it would be impossible to leave my responsibilities stateside for an extended period of time. Now, it’s routine. For me, and others.  Living abroad seems to be the norm among a growing crowd.

GIVE IT UP FOR SOMETHING BETTER

In the three small towns in Mexico, Costa Rica and Nicaragua, that I’ve adopted as second homes these last few years, I’m one of the shorter-term guests.  There are many ex-pats, some of whom have been here for 20 years or more. Many are full-time residents. Others live here six months on/six months off, or for extended stays.  The stories are endless. People fall in love — with someone, someplace, or something. Language isn’t a roadblock. The common thread: they all morph into new lives in another country.

While a small number may be independently wealthy, it’s more common to find the ex-pats are retired, or working from their newly established home bases.

In Costa Rica, the only corner grocery store in one town is owned by a Canadian. Her sons consider themselves Costa Rican. The surf instructor gave up a marketing career in Texas to ride the waves every day. His adopted kids have never been stateside. A group of eight from Colorado recently invested in a coastal town to launch a travel-related business. Another Canadian came here regularly before she made the big switch. She hops on a bus a few days a week to work as a realtor in a larger town half an hour away.  An older Spaniard invested heavily in land here many years ago. Now, he’s semi-retired.

In Nicaragua, one couple from the Bay Area coordinates retreats to their eco-friendly paradise. An Australian couple came to surf here 20 years ago. They now own a hostel and raise their three kids in a place with no stores or paved streets.  A 30-something American returned to his place of birth to install an eco-lodge and health lodge on a beautiful island. His sister and wife help run the place while he commutes to a “day job” in Managua. Another mindful living resort just opened nearby. Its owner is a Spanish woman who traveled the world before settling here.

On a secluded beach, I meet a Canadian senior. He’s one of only three guests at a hostel. He’s booked for seven months. He returns to the same spot, year after year. A woman from Columbus, Ohio came to teach yoga for two months. That was more than a year ago. A Brit quit her IT job. Now, she’s aerating compost and helping build a yurt alongside a European woman who worked as a nurse for 18 years.  A Spanish veterinarian has no immediate plans to return to Spain, or the animals.

In Mexico, an American, and her mom, run a used book store. It’s actually the only book store in town.  This place seems to be teeming with Californians. Many, keep those CA license plates and drive back and forth 1,000 miles, periodically.   One helps others to resettle and find property or homes to buy. There’s a dancer, and a yogi, a lot of artists, some with galleries, and of course loads of California surfers.

Some let the pieces fall where they’re meant to go. Two people from two different countries living in two other countries have similar stories.

A young boy begins meditating in Virginia at the age of four. By 24, he is meditating atop a mountain in India, nearly naked, for a month.  Even when snowfalls. By some fluke, he made it to a remote part of Mexico. That was nearly 20 years back.

More recently, an American financial analyst gave up the big numbers and big bucks to make a difference in the world. After traveling to dozens of countries, he got to Nicaragua to set his stakes.

Each felt divine providence brought them to their respective off-the-grid lands. They each made investments, based on their guts, and hearts. Both lands were in the wilderness and required tremendous vision and patience.

The land in Mexico now has solar to power living quarters for up to 30 people, living modestly. The 80-acre property in Nicaragua is still in the infancy stage. They just built a compost toilet and a yurt. Both men created businesses in line with their values, and personal lives. The Mexican beachfront land is primarily used for yoga teacher training and the visionary’s father and brother live and work on the complex.  In Nicaragua, the acreage is part of a sustainable network that includes a popular hostel. The creator’s dad visits frequently, oftentimes with his own brother, who is part of the enterprise as well.

These are the people that I hope to learn from. Wanderlusts. Taking life day by day. Borders and time zones are just arbitrary man-made lines.