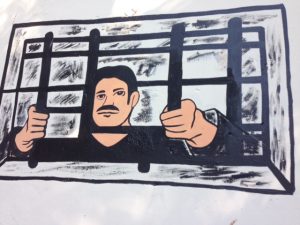 Leon, Nicaragua, Seat of the Revolution

As a college student in the 70s, I thought I knew what was going on in Nicaragua. In truth, it was probably more than most Americans, but I was still in the dark. I spent a year in Latin America where one of my professors spoke about his involvement with the Sandinista’s literacy campaign.  I admired his altruism and convictions. He, and other professors, spoke about the backgrounds leading up to revolutions in Latin America, including the role of the United States.

That is what brings me to León, Nicaragua. Back in 1811, the first shout for independence took place here. In my lifetime, it was the seat of the revolution. The streets where the Sandinistas spoke out against the Somoza dictatorships. The spot where far too many died. And, the city that today is a history book about the Nicaraguan revolution, albeit somewhat hard to read the pages.

A taxi driver claims that León is 100 percent Sandinista. Maybe since he knows I’m a foreigner, he feels comfortable adding, “Under Somoza, a córdoba was a córdoba. Now, with 100, you can’t buy anything.”

I may be in the land of the Sandinistas, but the pages of the history book aren’t in full view. After soaking up information at the Museo de la Revolución, I find a guide who lived through the revolution. For a few hours, I experience an eye-opening close-up of Leon’s past. As we stroll together down the streets, my guide salutes many a compañero and comandante. My guide (I’ll call him El Teniente) was a guerrilla at the young age of 14. He wasn’t looking to act tough, or carry weapons. He was a normal kid. Innocent. Then, arrested, jailed, and tortured. His crime? “Being young,” he says. Guilty by association. After that, he pledged allegiance to the Sandinistas.

El Teniente tells me that at one time, 300 kids were killed daily. Not only that, they were victimized or bore witness to widespread arson, torture, rape, and firing squads. “Everyone between the ages of 14-25 was under threat of being picked up.”  So it’s not surprising that at times, we visit places that trigger his PTSD. León may seem like a beautiful place to visit, but there are many skeletons here.

Part of the León tourist trail is the Museum of Legends and Traditions. I would never have come here on my own. It sounds like Ripley’s Believe It Or Not focusing on torture. While the exhibits aren’t spectacular, coming here with my guide makes all the difference.  This is where El Teniente was imprisoned for several weeks. The former cells were destroyed by bomb fire, so the existing buildings are rebuilt. There are many images and signs here to harness anxiety in El Teniente and remind visitors of the routine inhumane acts of torture.

In the courtyard, sits a tank. It’s named Aracely, for a high-ranking Mexican-born guerrillera. This is a reminder that it was not uncommon for people from other countries to join the guerillas. Likewise, it wasn’t uncommon for females to be part of the brigades. Many, in Nicaragua, tell me how the revolution brought about equality for women. Aracely Perez was a high-ranking Sandinista. She was a “Jefa de Estado Mayor.”

In 1979, this tank led the insurgents’ fight against Somoza’s army, the Guardia Nacional. El Teniente says it had a direct role in toppling the dictator. After the FSLN (Sandinistas) won, the tank stayed in Managua for 30 years. Then, under Daniel Ortega’s rule, the tank returned to León to honor the role of the revolutionaries in this city.

Speaking of the Guardia Nacional, after chatting with some security guards, El Teniente takes me inside what was once a prison controlled by the Guardia Nacional. Today, it’s a vocational school. The center offers career paths to people of all ages. There are courses ranging from IT to pastry-making. Under the scope of these uplifting services, it’s hard to imagine its prior life.

Another stop that was memorable for me was never in any guidebook. We head to a gallery dedicated to young martyrs. As El Teniente points it out, I think I misunderstand. The name on the building is something completely different than what El Teniente tells me. Of course, he’s right. The sign is wrong.

He lets me view the rooms alone. It’s almost haunting. Names and images of so many young people that were murdered. Since most never had proper burials, this is the best way they can be remembered and memorialized. This small building is run by the mothers of the youth that were killed during the revolution. The women pulled together images of their children and the many others who were abducted and slaughtered. Now, they take turns sitting at this unique memorial spot.

So now, it’s time for me to chat with one of the mothers.  I’ll call her Laura. She’s from the same neighborhood as El Teniente.  “They took her house, and the government gave her nothing,” El Teniente says.

“Blood ran like water,” Laura recalls of those days. She had suspicions her children were involved with the revolution. They would come home late, nap, change clothes, and leave again.  Sometimes, they’d be with friends. They’d arrive hungry. She’d feed them. She was aware of a cache of arms hidden in her house. That was her way to help the revolution.

“If one does nothing, there is no triumph.” Many other women helped out, indirectly. They’d clean the wounds of their friends or family members. “Without the women, there wouldn’t have been a revolution,” she says, echoing previous statements from El Teniente.

Laura’s 19-year-old, she learned, was buried alive. Her 20-year-old’s head was shattered. Her faith kept her going forward.

While Laura was not directly involved in politics or the revolution, “I felt a sense of happiness when the Sandinistas won,” she said. Today, she has four grandchildren in college. Before the revolution, that wouldn’t have been possible.  During Somoza’s regime, “women learned how to make flowers…boys built buildings. Today, any career is a possibility. People graduate all the time. That was never the case.” Before, only the wealthy could get an education. Now, education is free. Students get shoes, backpacks, notebooks, and snacks.

According to one sign in León, Somoza was responsible for the loss of 20,000 people, “among whom were men, women, senior citizens and children. Entire communities were obliterated. Somoza came to power via a blood bath…The tyrant, reformed the constitution four times, for the benefit of his own interests…The acts of Rigoberto were a historic political necessity for our pueblo.”

Somoza was a puppet of the United States. What’s more, Somoza’s army brutally murdered Augusto Cesar Sandino in 1934. Sandino’s slogan was “don’t sell out, or give up.” Hence, after his assassination, his followers revved up the resistance. The Sandinistas strengthened as they struggled for more than 40 years to topple the many layers of the Somoza and North American dynasties. “We didn’t stop,” says El Teniente. “Strikes. Workers. Students. Youth. We kept the revolution alive.“

From 1973 to 1978, the students in Leon carried out what was known as the “five years of fighting.” They dealt with heavy repression from the National Guard. Every day they kept up the resistance. They cried out, “no más dictaduras and Viva Sandino.”

After 22 years of fraudulent elections, graft, repression, and mass killings, the guerrillas had a plan to overtake the government. Lopez, a poet, and three others supposedly had everything perfectly plotted out. Two of the men were hiding by the power plant, ready to force a black-out.  The third man was waiting in a getaway car.  However, Somoza got a call at the party regarding a family emergency, so left the party early. Not about to give up on their rare chance to be so close to Somoza, one hour earlier than expected, Lopez pulled the trigger. Five times.

Lopez’s escape plan failed. Somoza’s guards shot at him 50 times. While there were trails of his blood, his body was never found. His partners in the assassination attempt, however, were found three months later. Dead. Tortured.

Somoza died in a hospital in Panama a few days after the party in León. He was 60 years old, and according to La Prensa newspaper, had a net worth of $100 million. Luis Anastasio Somoza, the president’s first son, automatically took his place at the helm. There were no elections.

In the aftermath of Somoza’s assassination, more than 500 people were arrested and tortured. Among those who eventually got a trial, and were found guilty, was the publisher of La Prensa, Pedro Joaquin Chamorro. Since his newspaper was anti-Somoza, he, too, was murdered, presumably by Somoza Debayle, the first Somoza’s second son. Chamorro’s widow, Violeta, took over the newspaper. She later was part of a military junta and was elected Nicaragua’s first female president in 1990.

This elegant Spanish colonial building is open to the public. It’s easy for people to enter — and have no understanding of its significance in history. After my visit with El Teniente, I return the next day and there’s an arts and crafts fair throughout the patio. It’s hard for me to not recall the descriptions made by El Teniente.

Murals, statues, and writings about the revolution are widespread in León. While the city of Esteli is known for its mural art, and there are tours of the murals, the presence here is more powerful, since it all revolves around the revolution. It’s helpful to have a guide, or at least a good understanding of the revolution and its icons to fully appreciate what surrounds you. Plus, an understanding of Spanish is essential.

The shadow of Sandino is a popular icon. The shadow represents people that were hiding, or masked, trying to protect themselves and their families. Fonseca, Mayorga, and Borge are considered the architects of the revolution. La Gata was the first student union president. Son of a well-known lawyer and poet, he represented Nicaragua at a convention in New York in 1970 where he spoke out about human rights violations in his country. Over the next few years, he got paramilitary training and hid out in the mountains of Nicaragua. He was killed in combat in 1976.

The colors red and black are symbolic, too. In many places, there are waving flags or stripes in those colors which represent “patria libre o morir” (freedom or death). In Sandino’s words, “Nosotros iremos hacia el sol de la libertad, o hacia la muerte (We’ll go to freedom’s sun, or to our death).”