Chagall: Fantasies for the Stage 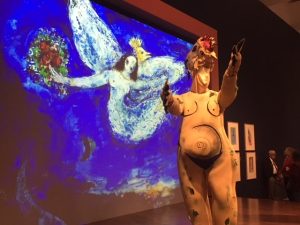 He’s known as an artist. His work is easily identifiable. Floating, or flying, almost God-like figures. Often blue-tinged backgrounds. Violins, and expressions of love, above the clouds. He has been called the pioneer of modernism. Yet, few know he was a set designer and costume designer.

Marc Chagall was born in present-day Belarus. Commonly viewed as a Frenchman,  he left Russia around the age of 20. He quickly rose art set, living in Montparnasse and other Parisian artist colonies. However, by 1941, Chagall, a Jew, fled Nazi-occupied France. Just one year after he arrived in New York, he began work as a set and costume designer for highly acclaimed ballets and operas.

Chagall: Fantasies for the Stage, is on display at Los Angeles County Museum of Art (LACMA), through January 7, 2018.  A total of 145 objects are on display, including 41 surrealistic costumes and nearly 100 of Chagall’s dynamic sketches for the costumes, curtains, and backgrounds all of which Chagall himself hand-painted.

While earlier in his career, Chagall collaborated with the Ballets Russes and the Moscow State Jewish Theatre, the LACMA exhibition concentrates on the ballets Aleko (1942), The Firebird (1945), Daphnis and Chloé by Maurice Ravel (1958), and Wolfgang Amadeus Mozart’s opera The Magic Flute (1967).

“By focusing on these four productions created during and after his wartime exile in New York, this exhibition brings to the public’s awareness a lesser-known but riveting aspect of Chagall’s career, which began in pre-Revolutionary Russia and traversed the breadth of the 20th century,” said Stephanie Barron, senior curator of modern art, LACMA. “Chagall’s work for the stage is an important early chapter in the history of visual artists who have engaged in similar interdisciplinary collaborations that have immeasurably enriched the history of modern art.”

The exhibit is set chronologically, beginning with Aleko. His foray into the world of Ballet was when the Ballet Theatre of New York (now the American Ballet Theatre) commissioned him to design the scenery and costumes for Aleko. However, due to union rules, Chagall’s work premiered at the Palacio de Bellas Artes in Mexico City after which it opened at the Metropolitan Opera House in New York. The next year, Aleko was enjoyed by many at the Hollywood Bowl. As is often the case, one can see vestiges of Chagall’s shtetl life in Russia in all his work. What may be more unusual, but not surprising, are the influences from Mexico that radiate in his Aleko costumes.

The wardrobe for The Firebird seems somewhat fantastical, or as if designed for children. Chagall’s anthropomorphic imagery for The Firebird was inspired by Russian folklore and Yiddish allegories. Chagall’s work for The Firebird debuted at the Metropolitan Opera House in New York and then traveled to Los Angeles. He created more than 80 costumes for The Firebird. Interestingly enough, this marked Chagall’s re-entrance to the world of art. After his beloved wife died, Chagall’s paintbrush went dry. One of his daughters helped him to create another fantastical masterpiece set for the stage, this one, incorporating greater dimension and texture.

The Firebird was later sold to George Balanchine of the New York City Ballet. In 1970, Chagall’s costumes were revived, and The Firebird is still among the ballet company’s repertoire today.

Daphnis and Chloe opened at the Paris Opera in 1959. As with all the other productions, Chagall, himself painted all the costumes and sets. However, for this one, to ensure optimum coordination of movement with design, he tended to fine-tune his designs while the dancers were wearing the costumes. “Chagall saw the dancers as mobile elements of his original sketches, mirroring the figures he depicted in flight across his backdrop.”

The backdrop for Daphnis and Chloe is out of the ordinary for Chagall. The colors, rather than reminiscent of cobalt blue skies, are radiant. Yellows and burnt orange prevail, reflective of the sun.  Created with gouache, tempera, graphite, colored pencils, and silver paper collage, the backdrop has an uplifting effect to celebrate the reunion of the two main characters.

The final room of Chagall: Fantasies for the Stage features a selection of 14 of Chagall’s costumes and 16 sketches from The Magic Flute. The opera was commissioned by New York City’s Metropolitan Opera House for its inaugural season at Lincoln Center in February 1967. Chagall spent three years planning this work. In all, he created 121 costumes and 14 sets for The Magic Flute. Video interviews with his granddaughters, Bella and Meret Meyer, can be listened to in this room. They acknowledge that Chagall’s time in the United States was under-recognized.

He only lived in the U.S. for a short time, apparently, he didn’t adapt well. So he moved back to France after WWII. Yet, the works of art that he produced for the New York opera and ballet are remarkable and unforgettable.

For those unable to visit the LACMA exhibit, a catalog, Chagall and Music, Edited by Ambre Gauthier and Meret Meyer is available at thelacmastore.org