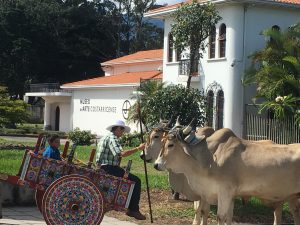 Most any visitor to Costa Rica is well aware of the nation’s coffee industry. You can barely catch a flight out of the country without being bombarded by the aroma and flavors of coffee at every turn. Costa Rica’s coffee was the fuel to the economic growth of the country.  As highly recognized is the coffee bean to the tourist, a cultural icon associated with the industry is not as widely known. It’s what converted the coffee to a major export: the oxcart. Under President Oscar Arias, in 1988, the carreta was declared the National Labor Symbol.

Britt, a well known Costa Rican coffee maker explains, “Costa Rica’s identity as a nation is closely related to our status as one of the top coffee-growing countries in the world, so much so that even one of our national symbols, the oxcart, is related to coffee beans.”

While an oxcart may seem obsolete nowadays, there is a great deal of pride in the carts. So much so, that hundreds of boyeros (ox shepherds) bring their favored animals and carts to San Jose every year for the oxcart parade. The traditions, which have not been erased, make for a lively and colorful way to celebrate Costa Rica’s economic power and the coffee industry.

History of the Carreta

The history and importance of the oxcart to Costa Rica go hand in hand with the coffee industry. Costa Rica first exported coffee, to England, in 1843. Without the oxcarts, the beans would have never left the plantations. The journey, from plantation to seaport, through a wide range of terrains, took two weeks, one way. To help keep the beans through the rain forests and rocky mountains, spoke-less wheels were invented.

According to the Tico Times newspaper, “a couple of centuries ago, oxcarts were just ordinary, undecorated carts used to transport coffee and other goods to Puntarenas for export.” However, in the early 20th century, people began decorating their oxcarts as a symbol of social status, as well as to identify the communities in which they lived.

Of note, before the ox was pulling these carts, men were responsible for carrying the load.  Of course in the earlier years, the carreta loads were significantly smaller. As production multiplied, a stronger force at the front of the cart was required.

The Golden Age of the oxcart in Costa Rica was around 1850 to 1935. During that time, the oxcart was intricately a part of the economic strength of the country. People make analogies between the oxcart and the tenacity of Costa Ricans. The carreta was designed to withstand and overcome obstacles such as muddy roads, blind curves, steep inclines, cliffs, and more. Likewise, the boyero represents those who are dedicated to the advancement of the nation and the tenacity of a young country. Together, they represent culture, peace, humility, patience, and sacrifice states a Costa Rican travel guide. Furthermore, “the national symbols,  are those that represent the spirit of the Costa Rican people …lovers of peace and democracy.”

The Tico Times labels Sarchí, Alajuela as “the birthplace of the brilliantly painted oxcarts that are a national symbol of Costa Rica.” Today, tourists from around the world come to this small town just 19 kilometers from the airport, to view the intricately decorated multi-colored carts.

The Wheels in Motion

The 2018 event was on Sunday morning, November 25. There are similar events in Escazú (March) and Atenas, Alajuela (July), both of which are close to San Jose.

The parade is not well-publicized, so ask around to verify the time and date. To make the most of your experience, head to La Sabana Park, well before the parade begins. Then, find a spot anywhere along Paseo Colon to enjoy the music, dancing, and of course the carretas and boyeros.   Of course, keep in mind that roads will be closed, so get there early, and don’t be in a hurry to leave, unless you’re walking.