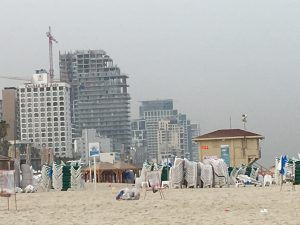 Israel: A Leader in R&D

At its widest, Israel is only 85 miles wide. The tiny vertical sliver of a state measures 270 miles long. That’s the distance from San Antonio to Dallas. What’s more, the country is only 64 years young. Yet, its legacy for R&D is long and impressive.

No Longer a Barren Desert

From day one, the state of Israel had to be innovative. Before the state was founded in 1948, the land was barren.  According to Mark Twain, who visited in 1867, he never saw a tree or a bush from Jaffa to Jerusalem.

By 1951, just a few years after the founding of the state of Israel, they literally drained the swamps, ending any threat of malaria. Yes, surprisingly, there were swamps amid the desert land. Therefore, water management was a top priority.

In the 1970s, the Israelis invented automated irrigation drip technology. Given that most of Israel is in a desert, this innovation led to an agricultural revolution. Today, no other country can beat the level of water management that Israel has mastered. Consider that 86 percent of greywater is recaptured for irrigation. Plus, Israeli technology mastered water desalination, allowing more drinking water.

In 2016, “Scientific American” reported, “One of the driest countries on Earth now makes more freshwater than it needs. Driven by necessity, Israel is learning to squeeze more out of a drop of water than any country on Earth.”

As a result of their innovation, Israel has enough water to sell its excess to its next-door neighbor, Jordan.  This tiny country is ranked #1 in the world for water management and is among the top few for solar energy.

Given its track record for water and solar, a team from the City of San Antonio, including then-Mayor Julian Castro went to Israel on a fact-finding mission in 2011.  “Israel’s success, its ecosystem of innovation, should inspire San Antonio,” Castro stated.

“Castro and others also were struck to see that most every home and apartment building were topped by solar water heaters, which generate 5 percent to 7 percent of the power produced in Israel,” reported the San Antonio Express-News.

With innovation in irrigation and energy, Israel stands as a leader in agricultural business and technology. One of its crops has also placed Israel at the top of the world list.

A Global Leader in Medical Marijuana

Israel was the first country to use medical marijuana. Even “Rolling Stone” reported on Israel’s connections to cannabis. “Israel is where THC and the endocannabinoid system were first discovered. It was just 1963 when Dr. Raphael Mechoulam identified and separated the 22 different properties such as THC.

Over the years, cannabis has been prescribed in Israel for PTSD, pain, melanoma, anorexia/bulimia, Parkinson’s, and asthma.

A “US News” report called Israel, “The Holy Land of Medical Marijuana,” and pondered

“How a country the size of New Jersey became the epicenter of medicinal marijuana.”

The article continues praising Israel for its advances in the use of non-recreational cannabis.

“Israeli research pioneered the medical marijuana industry. Israel was among the first countries to legalize medical marijuana – it remains illegal for recreational use – and is one of just three countries with a government-sponsored cannabis program, along with Canada and the Netherlands. Right now, there are more than 110 clinical trials involving cannabis are underway in Israel, more than any other country.”

Among those trials was one at Hebrew University in Jerusalem. Using rats and mice, the researchers believed cannabis to be beneficial to counteract traumatic brain injuries.

While the U.S. has Fashion Week, RV, and Consumer Electronics expos, Israel was recently the host of the CannaTech Conference.  Not just for marketers, high-level government health officials were in attendance.  Set in modern Tel Aviv, CannaTech 2018 attracted attendees from 40 countries. Among the areas of focus were agricultural and medical research, innovation, and sustainability.

Approximately 70 percent of Israelis have master’s degrees. The Technion Israel Institute of Technology, in Haifa, attracts students and professors from around the world. Consistently ranked among the world’s best campuses for R&D, several of its staff have been recognized with Nobel Prize winners. Even before the State of Israel was founded, Albert Einstein paid a visit to this university that began under the Ottoman Empire. Today, some attribute Israel’s rank as a “start-up nation” to be greatly a result of Technion’s impact.

Among the country’s developments that many of us can’t live without are the Kindle, memory sticks, and cell phones.

Cell phone technology was developed by Motorola, Israel in 1983. The world’s first commercial portable cellular was the DynaTAC a Motorola Israel invention.

In the year 2000, the now-ubiquitous USB “Disc-on-key” was invented by an Israeli tech company. It was later bought by the American San-Disk.