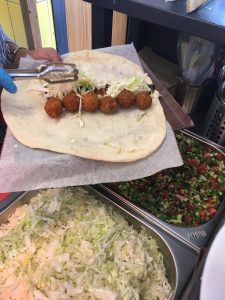 For 45 years, I’ve “made do” trying to find plant-based food around the world. While many travelers consider France to be a culinary best, I stuck to fresh foods from a corner store or street market.  As my dietary restrictions increase (gluten-free, low glycemic, vegan), and my travel goes beyond my linguistic comfort zones, I’ve learned to pack dry or powdered foods to take with me.

On my last trip to Israel, I knew my belly and taste buds would be in heaven.

Beyond Hummus and Falafel

I can eat hummus any time of day. And, in fact, I did often eat hummus for breakfast in Israel. You can skip the pita and eat it with vegetables, or solo. While the average North American supermarket is starting to offer a wide option of hummus flavors, in Israel, regardless of the variety, the quality is bar none. After eating Israeli hummus, you may never want to buy the stateside refrigerated packs again. Israeli hummus is freshly made and has a different consistency. If you want to learn how to make your own, Abraham Hostel in Jerusalem offers hummus-making workshops.

Just as Israeli hummus may turn you off the American pre-fab types, the same goes with falafel. It may not be as ubiquitous in the States as hummus, but American grocery stores now sell boxes where you just add water and fry. But while the American falafel balls will fill a vegan’s belly, the Israeli falafel sandwich will wow all your senses. Depending on where you pick yours up, you can almost always add fried eggplant, French fries, and multiple toppings ranging from hot sauce to a curried mango. Some places are almost like a salad bar with the options of what you can put alongside the falafel patties. Plus, Israeli falafel stands often give you your choice of pita, or a thinner, softer flatbread called laffa. Of course, they come out warm, and large, and hard to eat without spilling, so your hands get a workout along with your eyes, nose, tastebuds, and belly.

While I would be happy eating nothing but hummus and falafel for quite some time, in Israel, vegans can get spoiled by all the wonderful healthy tasty options.

Eggplant is served up in many a delish way in Israel, as is cauliflower. The pomegranates are exquisite. Spices, nuts, dates, you name it. A vegan fits right in in Israel. You don’t have to order the only option on the menu, or, request #23 without the meat, eggs, or cream sauce. Finally, no one will look at you as if you are from another planet.

In Israel, dietary restrictions are the norm. Kosher (fit, clean) laws require that meat and dairy are not eaten together. Furthermore, after eating meat, observant Jews may wait up to six hours before consuming any dairy products. Animal products like shrimp or shellfish are never allowed. While many Israelis don’t keep kosher, they are all used to restaurants that are dairy only (meat-free) or dairy-free. During passover season, wheat, barley, spelt, oats, and rye are not “kosher for passover.” Quinoa, a great source of protein, is a seed rather than a grain. Therefore, quinoa is kosher for passover, and while quinoa comes from the Andes, Israelis are familiar with it.

Additionally, the Muslim population traditionally honors halal (lawful) dietary rules. Gelatin, pork, rennet (in many kinds of cheese), and lard, for example, are neither halal nor kosher.  While the halal and kosher slaughter of animals is not identical, they both have rules to respect the animal being sacrificed.

Beyond the traditional halal or kosher restrictions, there is an increasing tendency for Israelis to follow healthier dietary practices. Hence, gluten-free and sugar-free items are easy to find. Halva, the sweet treat made from crushed sesame seeds, abounds in the large markets. It’s fairly easy to find sugar-free and vegan versions of halvah. While in the States, we rarely see halva, in Israel, the varieties are endless, and all are superb.

Finally, both the Arab and Jewish markets offer tantalizing fresh foods, spices, teas, drinks, and snacks. No processed foods with hidden ingredients or chemicals. You get what you see.

There are an estimated 200,000 vegans in Tel Aviv. With a total population of 8 million, that’s a pretty high percentage of plant-based eaters.

Adi Madanes is a musician in Tel Aviv.  While he’s been vegetarian since he was 12, he credits the plant-based movement in Israel, and Tel Aviv in particular, to an American animal rights activist.

Gary Yourofsky gave a speech at Georgia Tech that underscored the reasons why animals should not be slaughtered. The video version was translated to Hebrew and shared via social media at lightning pace. It is said that the Georgia Tech video became the most viewed in Israel’s history. The Hebrew subtitled version had more than one million hits in Israel.

As a result, to ramp up the interest in plant-based diets, Yourofsky spent six weeks in The Holy Land doing the speaker circuit. In addition to the many college campuses where he spoke, he conducted media interviews to highlight the horrors behind meat and dairy production.