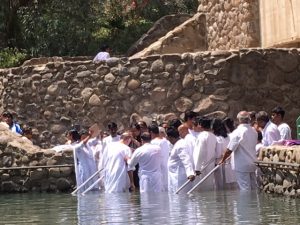 It’s no secret that Israel is The Holy Land, for Jews, Muslims, and Christians. There are so many sites that those seeking to re-connect or deepen, their spiritual roots can visit. It can be overwhelming. Many Christian travelers opt for guided pilgrimages. For DIY-ers that have the time, experience Christianity’s legacy by following the Jesus Trail or the Gospel Trail. Both are about 65 kilometers long.

DIY: Follow the Jesus Trail or Gospel Trail in the Galilee

The Jesus Trail opened in 2007. The Jesus Trail is a private, non-profit venture. It winds north from Nazareth, all the way to Bethsaida just a few miles northeast of the Sea of Galilee, a freshwater lake 700-feet below sea level where Jesus is said to have walked on water.

For those hesitant to walk the full 65-kilometer Jesus Trail, you can bike it. And, there’s an option for those that prefer to catch a few car rides. For example, you can catch a bus from Nazareth to Cana, both towns that are farther from the Sea. Likewise, you can ride a bus around the western edge of the Galilee from Tiberias to Tabgha. Accommodations along the way range from guest houses, an organic farm, inns, or hotels. Or, you can camp out.

In 2011, the Israeli Ministry of Tourism unveiled the Gospel Trail to enhance “the spiritual experience for every tourist and traveler in Israel, and especially for the Christian community.”

This self-guided Gospel pilgrimage follows what is believed to have been 30-year-old Jesus’ path when he was evicted from Nazareth. It starts at Mount Precipice and ends at Kfar Nahum (Capernaum). To facilitate the hike, the Israeli government installed trail markers, safety barriers, shaded rest areas, benches, picnic sites, and tourist information, all of which blend nicely into the natural environment.

This Gospel Trail weaves through predominantly natural environments, versus city life, making it a perfect way to reconnect with yourself, and your spirituality. There is no industry on the road to Galilee. Tourism and agriculture seem to be the primary businesses. There are commercial fishing ponds, and water parks, and the edges of parts of the lake are lined with pup tents or small boats.

Following are a few of the highlights along one or both trails.

For anyone familiar with the Camino de Santiago, which begins in France and ends in Santiago de Compostela, Spain, the Israeli trails are significantly shorter. They can more easily be completed in just four days. While you may not be hiking through the Pyrenees, there are uphill trails that can be tiring. The area by the Galilee has quite a few changes in elevation. For spiritual warriors, it’s worth it.