History, Unburied at the Alamo 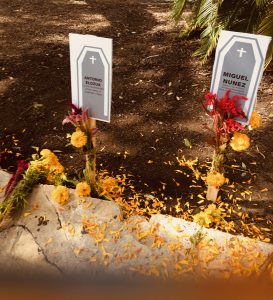 San Antonio is unique for having five World Heritage gems, all within a ten-minute drive from the city center. The San Antonio Missions.

“The San Antonio Missions are also an example of the interweaving of Spanish and Coahuiltecan cultures, illustrated by a variety of features, including the decorative elements of churches, which combine Catholic symbols with indigenous designs inspired by nature,” the UNESCO World Heritage website states.

“The complexes were built in the early eighteenth century and as a group, they illustrate the Spanish Crown’s efforts to colonize, evangelize and defend the northern frontier of New Spain. In addition to evangelizing the area’s indigenous population into converts loyal to the Catholic Church, the missions also included all the components required to establish self-sustaining, socio-economic communities loyal to the Spanish Crown…the widespread sharing of knowledge and skills among their inhabitants, and the early adoption of a common language and religion resulted in a people and culture with an identity neither wholly indigenous nor wholly Spanish that has proven exceptionally persistent and pervasive.”

While each of the missions is steeped in history, the Alamo has long been an icon for San Antonio. On May 10, 2019, the Texas Historical Commission (THC) designated a large portion of the Alamo Complex and Plaza, a “Historic Texas Cemetery.” Yet, the Texas General Land Office (GLO) is refusing to acknowledge that cemetery designation. In large part, because the Alamo is a tourist destination, and lacks rows of headstones. A final vote will take place on July 19. In Paris. Texas that is.

American Indians in Texas at the Spanish Colonial Missions* Executive Director, Ramon J. Vasquez has been leading Mission Heritage tours for several years. These aren’t your ordinary cursory tourist views of San Antonio.  Rather, The Mission Heritage Tours seek to tell the untold story. The Native narrative.  “We’re helping people to understand the reality. To tell the complete and accurate story. Go far beyond the movie images of John Wayne’s “Battle of the Alamo,” explains Vasquez. According to Vasquez, the Texas government is still viewing San Antonio through horse blinders. Vasquez, last weekend, told a tour group how history is being wiped out. “Our families’ contributions are being minimized and ignored, from the American Revolution to this very moment.” After hundreds of years of professed equality, there is still widespread discrimination and disrespect toward the Native peoples.

The GLO is refuting that the Alamo is a cemetery precisely because it is a tourist site. And, there are no headstones. Historic evidence is shelved. Logic, too.  “We are talking about burial grounds from the 1700s. The GLO is discounting people because they are indigenous to Texas, materially less off, or because they couldn’t place a granite monument up that would last 300 years. The GLO is saying our ancestors are not equally deserving protection under the law,” adds Vasquez. “That disregard may be detrimental and threatening on potentially all historic cemeteries and sites.” In fact, his people, the Tap Pilam Coahuitecan Nation have been fighting to protect these burial grounds for more than 30 years. As such, the Tap Pilam tribal community has done quite a bit of research. Among their sources are the San Antonio Archdiocese’s historical files that include baptismal, marriage, and burial records.  Moreover:

“Our community leaders and experts are being ignored,” says Vasquez. “It is another assault against people of color, who were the original inhabitants of this land. They want to plow under the very people that built the Alamo.” By 1731, the imposing Mission San Jose had already been built thanks to the labor of hundreds of Native Americans. In 1745, Spanish documents listed at least 600 people buried at the Alamo. 100 years later, hundreds more perished (and were interred) at the Battle of the Alamo and the Siege of Bejar.  “Our history is a gift to the city of San Antonio. Yet history is disregarded,” states Vasquez.  “We have the names of those buried here. Our families have struggled for generations to preserve the final resting place of the first families of San Antonio. We cannot bury history. It is a family obligation to those that have paved the way. We have to preserve it for future generations. We are fighting for the descendants of the first Spanish settlers…the first Indian families…our Catholic families, and the families of the Defenders of the Alamo…all of whom are buried here. We’ve been defending our constitutional rights since the beginning, and protecting those rights for members of our families that have served and are serving today.”

*In 1994, the Tribal Council of the Tap Pilam Coahuiltecan Nation established American Indians in Texas at the Spanish Colonial Missions. The non-profit works for the preservation and protection of the culture and traditions of the Tap Pilam Coahuiltecan Nation and other indigenous people of the Spanish Colonial Missions in South Texas and Northern Mexico. Seeking to honor and pass along their family traditions and respect their sacred grounds, AIT has participated in the Alamo Plaza Study Committee since the beginning.