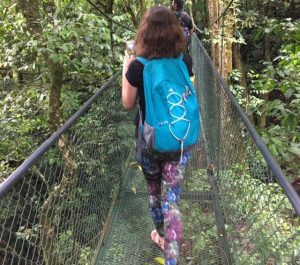 People head to Monteverde/Santa Elena, Costa Rica for a walk in the clouds. But there’s far more you can do there beyond walking around. Monteverde sits at an elevation of 4,300 feet while the neighboring Santa Elena reserve is at 5,200 feet. The billowy cloud formations in the cordillera account for the area being considered a cloud versus a rain forest.

Adventure in the Clouds

For the adventurous, there are many companies that provide adrenaline-boosting activities. Monteverde Adventure has been in business for more than 15 years. The tour operator offers free pick up and drop off in “100% Aventura” decorated shuttles. The company runs two excellent moderately-priced tours which can be combined into a great full-day experience. Each adventure takes place just a five-minute drive from the other via van service. Both outposts are just ten minutes away from the center of Santa Elena.

The Hanging Bridges (Puentes Colgantes) is a fairly tame two-mile, two-hour guided tour where you pass through eight large, long, swinging, but sturdy, bridges that form unforgettable walkways through the jungle-like setting.

While the paths are not flat, they are well defined and the guide keeps a slow pace to point out the flora and fauna. The tour is apt for people of all ages that are comfortable walking a few hours amid possible heavy rains, sometimes muddy paths, and where creepy crawlies and snakes may roam. Toward the end of the excursion, there are two not fun challenges that participants can take advantage of, or skip, as they choose.

Beyond the less desirable insects and reptiles, you may catch a glimpse of an agouti (guatusa), the second-largest rodent in Costa Rica. These vegetarian diurnal animals bury their food but usually forget about their stash. As a result, trees sprout from the animals’ buried treasures. If you’re lucky, you will hear or see the monkeys in the trees. And you can’t miss the incredible ficus trees that are everywhere. The enormous trees grow around other trees, essentially strangulating them so that the center, where the original tree once stood, hollows out. Many of the forest animals, like porcupines, retreat to the darkness and shelter of nature’s tent within the ficus.

For those seeking a greater thrill, don’t miss the Canopy Tour where you will be flying through the forest via sturdy and safe cables. There are hand controls to allow you to slow down or speed up your flights, and for those unsure about flying solo through the forest, most guides will happily go in tandem with their less extreme-minded guests. The thrill-seekers fly through the forest on ten zip lines, a hammock bridge, a Tarzan swing, and one rappel. The three-hour extreme tour is appropriate for kids age eight and older.

Both these options are very well run with excellent guides. You may want to bring a change of clothes, a rain jacket or poncho, visors, and water bottles. Don’t forget your cameras.

Getting Here and Getting Around

What once was difficult to reach is now a pretty simple bus or car trip from both international airports and most of the central and southern parts of the country. In a private car, the cloud forest region is just a bit only two and a half hours from either San José (SJO) or Liberia (LIR) airports.

If you take the bus ride from the city of San José, there are two departures a day. The six-dollar ride departs from the rather new terminal located about four blocks west of San José’s central market. Called the 7-11, it’s a large facility on the corner of Avenida 7 and Calle 10*. Depending on traffic and the number of passenger stops along the way, allow for about four hours, maybe more. All buses make rest and snack stop about 90 minutes away from Monteverde.

The bus drops you off at a modern Centro Comercial in Santa Elena. Here, you can pick up anything you want at the grocery store, a natural foods store, several eateries including one with good keto and vegan options, and shops with pretty much anything else you may need or want during your stay.

Most all the accommodations, even if they say Monteverde is really in Santa Elena. However, there are a few guest options closer to the Monteverde Cloud Forest. But the majority of sites are near or in the tiny town of Santa Elena. While taxis are fairly inexpensive, many prefer to have their own car here. None of the reserves are easily accessible on foot from the center of Santa Elena. Beyond the distances, there are a lot of ups and downs in the roads or walkways. Plus, there is the rain. Not necessarily heavy downpours, but rain nonetheless.

If walking in the rain doesn’t bother you, and if you’re used to a lot of hiking, walking from one attraction to another can be very peaceful. But, once you get to your destination there will likely be plenty more hiking. So pace yourself.

For recommendations on tamer hikes and tours, read my next articles. For general information on the area, visit mv.com

* Newcomers to San José can get confused with the city’s grid quadrants. Even-numbered streets are on one side of the city center, and odd numbers are on the other. So Calle 10 is rather far from Calle 11. Avenidas run east and west while Calles run north and south.