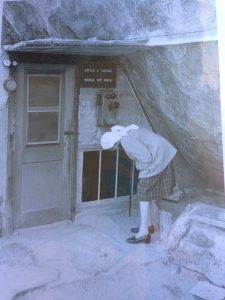 Last year, several thousand traveled to Joshua Tree, California to hear from world experts on all things extra-terrestrial.  Among them, some 100 Contact in the Desert attendees actually saw UFOs. Many, witnessed multiple sightings.

While the Fifth Annual Contact in the Desert is expected to attract 3,000 people to the Joshua Tree Retreat Center this May, the area has long been a magnet for those wanting answers about life beyond our planet.

Interestingly enough, the first Interplanetary Spacecraft Convention took place in 1953. Its setting was at Giant Rock, just a few miles away from the present Contact in the Desert venue.

Barbara Harris is a historian who has been researching otherworldly happenings in the high desert for many years. She will be leading a workshop and several outings to Giant Rock at this year’s Contact in the Desert. She says that at one time, it was estimated that as many as 11,000 people attended the spacecraft conventions at Giant Rock.

“I’m a historian interpreter, and a storyteller, I’m not a Ufologist. I need a lot of facts. We started seeing things with Contact in the Desert that I’d never seen before.”

Joshua Tree as a Magnet for UFOs

Harris explains why this part of the desert in California is highly frequented by UFOs.

First, there are many underground waterways or aquifers.

Second, the mineral content in the area is very high. According to the National Park Service, the current Joshua Tree National Park was once home to 300 mines. In fact, “Very few people know the white crystal quartz hill behind Giant Rock is different from all the other geology in the area.”

Going for the Trifecta in attracting UFOs, Joshua Tree is close to a Marine Corps base.

As if that weren’t enough, there’s one more reason why this part of the Mojave attracts people as well as UFOs.

And, very special places on this planet. Tibet, Baghdad, The Great Pyramids of Giza, The Bermuda Triangle, and The Phoenix Lights are all within the area of the 33rd north parallel.

“We’ve had UFO sightings all the time at Joshua Tree,” says Harris. “It was such a common occurrence. The local people actually made newspapers and newsletters and everybody would report their sightings. It was so normal. After the 70s it all stopped. It wasn’t until 2010 that it really started to pick up. People aren’t afraid to talk about it anymore.”

The Largest UFO Conference in the U.S.

Perhaps that’s one of the reasons why so many will be gathering in May for the largest UFO conference in the U.S. Contact in the Desert offers an all-star team of experts to discuss ancient alien studies, contact experiences, sightings, crop circles, abduction, and government interactions with aliens, among other things.

Filmmaker, Patty Greer, will be leading both a lecture and a workshop on May 21 on crop circles. She admits she wasn’t into sightings until 2007 when she had her own experience with other-dimensional beings.

Greer says this is a unique festival.  “You will be offered a smorgasbord of A to Z in ufology. And it’s going to be up to every person going to choose the information they want to receive. It is a huge event with offerings of every aspect of ufology. Part of my workshop…is to improve your telepathy, to improve your discernment. I think it’s going to be a champion year for the audience.”

Steven Greer, M.D., no relation to Patty, was chairman of an ER department before he switched gears to study UFOs. Author of four books, his latest release, a documentary called “Unacknowledged,” will be screened at the Joshua Tree festival on May 20. That same day, he’ll host a workshop on universal peace. The following evening he’ll lead a five-hour intensive featuring an Indian puja ceremony before he shares his procedures for communicating with extra-terrestrials.

Speaking of the magic number 33, Dr. Dream will be leading several thousand participants in a healing sound experience using 333 Tibetan bowls.  Accompanied by a team of 29 “angels,” the playing of the bowls, along with spraying of key essential oils help to open and energize each of the chakras. The experience is very different from other sound baths or singing bowl concerts.

“I get to be a trigger in that sea of information and get them back into their hearts,” says Dr. Dream. “Contact is a unique experience … the premier event of its type.  Joshua Tree is one of the most special places in the world.  I just love it there. The energy is so conducive to feeling good. Like-minded people, high energy environment, to connect and remind each other of whatever it is we have to remind each other of.”

Set on an ancient sacred site, Joshua Tree Retreat Center is the oldest and largest retreat center in the Western U.S. and boasts outstanding architecture designed by Frank Lloyd Wright and his son, Lloyd Wright.

Harris gushes about the natural beauty of the area, especially in May, when Contact in the Desert takes place. “The flowers are blooming. You get the night skies and you can just sit and look at the skies. You’ll see stars that you’ve probably never seen before. It’s something so different than what most people experience.”

Joshua Tree is on 29 Palms Highway, less than a three-hour drive from LAX, about an hour from the Ontario airport, and just about 30 minutes from the Palm Springs airport. Many, chose to camp at the retreat center to experience the beauty of the desert.