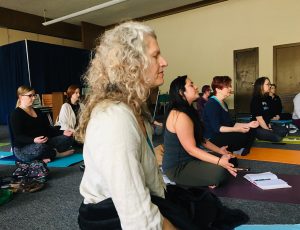 The Dallas yoga community is preparing for something special this leap year weekend. The first World Bhakti Festival takes place Feb. 28, 29, and March 1 at Westside Wellness. The festival includes a free admission fair on Saturday with local vendors, healers, and plant-based food and drinks, as well as a variety of free traditional yoga and meditation classes, and education workshops. However, the main focus of the festival, as the name implies, is Bhakti: the yoga of devotion.

This is the first yoga festival of its kind in Texas. What’s more, it’s open to people of all ages, all abilities, all religions, and all socio-economic levels. So, it’s a good opportunity for a road trip, regardless of your connection to Bhakti Yoga. Especially given the diverse offerings, affordability, and comfortable venue.

Since the festival is centered around devotion, it’s appropriate that the venue is within the oldest continual congregation in Dallas.  Westside Wellness is actually a holistic healing center nestled within the Central Christian Church (Disciples of Christ) complex. The six-acre campus includes a zen garden, a one-acre wifi-equipped dog park with its own lending library, a community vegetable garden, and a soccer field. Additionally, this is a popular wedding venue with a neo-classical sanctuary with a pipe organ, and a separate chapel or “little church.”

Westside Wellness is just an eight-minute drive from Love Field Airport (DAL), and another eight minutes to the Museum of Geometric and MADI Art.  About a ten-minute drive, and you’re at Reunion Tower, Uptown Katy Trail, Dallas Museum of Art, the World Aquarium, or Perot Museum of Nature and Science. Find more to explore in and around Central Dallas to round out your road trip or weekend getaway.

According to one of the three World Bhakti co-founders, Lavanga Latika Devi Dasi, “Bhakti is inherent in traditions all over the world.  It’s actually the string that holds them (religious traditions) all together.  The heart of Bhakti is learning to see how we are actually more alike than different.  When we sing in Kirtan (musical expression of Bhakti), there is no us and them. By awakening our relationship to the Divine, we can then see how we are all children coming from the same source.”

Bhakti has been gaining steam across the U.S. along with the rise in the spiritual but not religious population. Bhakti festivals are popping up across the U.S., in part fueled by people’s love for music. At the Bhakti festivals, devotion is primarily expressed through the form of Kirtan music. Basically, chanting of the holy name, prayers and mantras, swaying and even ecstatic dancing to the beat of the drums — or electric guitar.

Bhakti resonates with everyone, as music is a universal language, and expression. As a result, music will be an important component of the leap year weekend activities at World Bhakti Festival.

Visitors can attend the entire weekend. Or, register for specific days or events. A portion of the World Bhakti festival proceeds benefits a non-profit that helps women navigate the emotional, mental, physical, legal, and technical obstacles after the loss of a spouse.

Following is a partial listing of la carte options.

Friday 7-9 p.m. The festival kicks off with a concert with headliner Sean Johnson and the Wild Lotus Band preceded by Stefanie Tovar. Tovar, inspired by Johnson, has been a presenter at the Sedona Yoga Festival.  Johnson, a favorite among yoga teachers and Kirtan enthusiasts, leads a band that was the first of its kind to play the New Orleans Jazz Fest. Wild Lotus is steeped with soul-stirring versions of ancient mantras that reflect a fusion of New Orleans roots, rock, gospel, and world grooves.

Saturday 6-9 p.m. The second extended concert night features Sean Johnson and the Wild Lotus Band along with Bhakti House Band. Both Bhakti House and Wild Lotus bands share styles that range from funk to country to gospel and R&B. They are both high energy, and at the same time, very introspective. The two bands routinely travel across the country to lead in small intimate groups, as well as mega-venues.

Kristin Brooks, of Bhakti House Band, says Johnson “brings a very Southern, soulful vibe to his music. Texas culture is already filled with deep devotion—-it’s simply finding the entry point into the Texas heart–and anything with a little bit of that gospel vibe seems to do the trick.” Wild Lotus’ “Unity” album debuted #1 on the iTunes World Music Chart and #3 on Billboard. In the meantime, Bhakti House Band’s sixth album, a late 2019 release of “Roots to Revolutions,” ranked #5 on iTunes and #1 on Billboard.

Saturday 9:30-11 a.m. and 2-5:30 p.m. Johnson, who owns two yoga studios in New Orleans, leads two Bhakti on the mat classes that weave in storytelling and music by the Wild Lotus Band. The morning session incorporates a dynamic yoga flow, and the afternoon class features poetry writing. In both, Johnson re-creates stories from yoga mythology to bring more meaning and depth to the songs and chants shared.

Saturday 2:30-3:30 p.m. For a new twist to Hatha, Kirsten Joy Burch guides Tantra yoga with meditation. Burch is co-founder of World Bhakti and director of operations and development for Westside Wellness. Additionally, she is the owner of Living Yoga Dallas and the founder of PraniLife Consulting.

Sunday 1:30-4 p.m.  Closing out the weekend is a workshop for yoga teachers. Johnson, for many years, has attracted Bhakti enthusiasts from across North America to attend his weeklong immersions in New Orleans. Now, he and the Wild Lotus Band members are presenting a mini-version in Dallas. Their entertaining and informative workshop focuses on infusing music and chanting into a yoga practice.